How do you know if you've got endometriosis? Being more tired than usual could be a sign 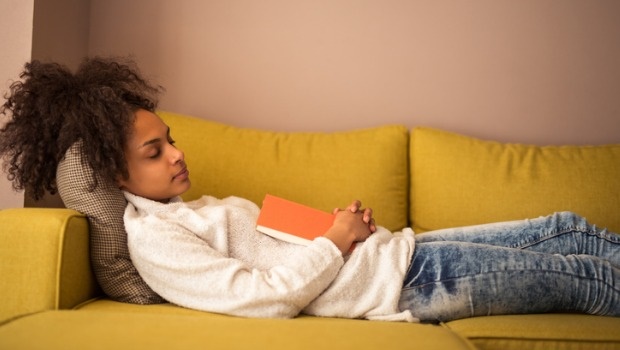 A woman falls asleep on the couch

You might think that everything has its fixed place in the human body, but perhaps you would be surprised to learn that there are instances in which the natural order is disturbed - take endometriosis, for example.

According to endometriosis.org, millions of women suffer from endometriosis, in fact, it is estimated that 5-10% or 176 million women of childbearing age are affected during the prime years of their lives.

According to new research, fatigue could be a sign of endometriosis along with the other symptoms described below, but it is often ignored by doctors. As a result, many women don’t receive the care they need.

According to Elite Daily, a new international study shows that chronic fatigue in women isn’t just a common sign that you might have endometriosis, but it'’s also an “underestimated symptom”.

The study took place over six years, from 2010 to 2016, and looked at over 1100 women from the European countries of Switzerland, Germany, and Austria. Half of them had endometriosis, and while the other half didn't.

These women were given a questionairre that asked them about their various lifestyle factors, quality of life, mental health disorders and medical and family histories.

Basically, the fatigue isn’t bad enough – it also leads to insomnia, mental health issues and a lot of stress.

You can't prevent endometriosis but if you have endometriosis you can reduce the symptoms by lowering the levels of the hormone oestrogen in your body.

The most common symptom of endometriosis is pain. These pain symptoms can have a huge impact on the everyday aspects of life, from personal relationships to careers. Different women experience different degrees of pain and the pain intensity can change from month to month. The result is that these symptoms are initially interpreted as normal menstrual complaints.

The different types of pain include:

Unfortunately, there is no simple test that can be used to diagnose endometriosis and definitive diagnosis is only possible with a laparoscopy and tissue biopsy. However, if you experience any of the above symptoms, it is important to seek out advice from your doctor.

Keep in mind, you can't prevent endometriosis but if you have endometriosis you can reduce the symptoms by lowering the levels of the hormone oestrogen in your body. Oestrogen helps to thicken the lining of your uterus during your menstrual cycle.

Some easy tips to lower your oestrogen levels:

Although there is currently no cure for endometriosis – there is a treatment to effectively alleviate pain and other symptoms, reduce the lesions, enhance fertility, and improve quality of life. Endometriosis doesn’t have to be an undiagnosed disease, it can be managed .

We live in a world where facts and fiction get blurred
In times of uncertainty you need journalism you can trust. For 14 free days, you can have access to a world of in-depth analyses, investigative journalism, top opinions and a range of features. Journalism strengthens democracy. Invest in the future today. Thereafter you will be billed R75 per month. You can cancel anytime and if you cancel within 14 days you won't be billed.
Subscribe to News24
Related Links
10 ways to relieve period pain
What it’s like to go to the gynaecologist for the very first time
Mammogram madness: a funny tale of shock and horror
Next on W24
Woman who lost leg to cancer forges ahead to become a nurse, complete UK master's degree