These women are #StrongerTogether because of cancer 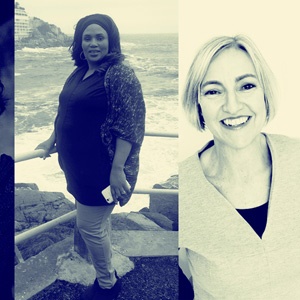 She was delighted when she discovered she was pregnant with her second son – she’d wanted another child for a long time.

But just one week later the unthinkable happened: she was diagnosed with breast cancer. Doctors strongly advised her against having chemotherapy while she was pregnant.

She was told to seriously consider aborting her baby as she needed to start treatment immediately. Fatima was faced with an impossibly tough decision: her life or that of her unborn baby…

Through sheer strength of will and by steadfastly refusing to give up, she survived to emerge smiling on the other side – with a beautiful baby boy who adds untold joy to her life.

Her actions and the people who joined her on her cancer journey proved that there truly is such a thing as being #StrongerTogether.

“Your child has cancer.” These are the words no parent ever imagines hearing. So when René and her husband Willem were told their 11-year-old daughter, Winé, had an aggressive type of brain cancer their world collapsed.

In the months that followed, René took care of her daughter day and night. She rented a flat near the hospital so she could take Winé to her treatments yet somehow still managed to keep her family together. Winé died nine months after her devastating diagnosis, leaving her parents and brother grief-stricken.

René hadn’t told her story publicly before deciding to do so as part of the #StrongerTogether campaign, because she knows how much strength she drew from the shared experiences of others whose lives had been affected by cancer.

When Maphuti went for a routine pap smear and found out she had cervical cancer, she was distraught.
Fortunately, the disease had been caught early, which greatly improved her chances of being operated on successfully and achieving a positive outcome from her treatment.

Now cancer-free, Maphuti has a new appreciation of life. While she was undergoing treatment, she was unable to see beyond cancer. Now she regularly shares her experience at health talks, encouraging women to go for regular checkups and take care of their bodies – proving we are all indeed #StrongerTogether.

An ordinary woman who carried an extraordinary load – that’s the best way to describe Anjolien, who has had to accompany her mother, husband and sister on their cancer journeys.

She embodies what it means to be #StrongerTogether by supporting her husband, Stephan, through a diagnosis of skin cancer and involving their two children in his care and recuperation. Stephan is now cancer-free and on a mission of his own to educate South Africans about sun safety.

From applying her background as an oncology nurse to push Stephan to get a suspicious spot checked out, to dealing with the unexpected outcome of his surgery and treating the wound herself, Anjolien shows that when it comes to cancer we really are #StrongerTogether.

Although she has been in remission from cancer of the larynx for more than 20 years, Ester is still passionate about telling her story because it made her realise just how much we take our voices for granted.

She was determined not to have her vocal chords removed because she wanted to laugh and talk with her grandchildren. And she has been successful in this quest.

She is also making a difference in the lives of others, completing training in home-based care for cancer patients, managing fundraising initiatives, helping out with child care and managing a feeding scheme.

Newly diagnosed cancer patients are very close to her heart and she puts them in touch with survivors to show them we are all #StrongerTogether and that the disease can be beaten.

Events such as Relay for Life (www.relayforlife.org.za) are also important to her because they give loved ones and carers a chance to honour and salute those who have lost the battle.

She likes to joke that her daughter, Adele, is eight going on 53. For Cheryl, this special little girl defined her battle with breast cancer and became her sole reason for surviving.

She was also the voice of reason at the outset when Cheryl didn’t know how to talk about her diagnosis. With the straightforwardness of a child, Adele reminded her mom that telling it like it is always works best.

Following a mastectomy and chemotherapy, Cheryl is in remission and now working tirelessly to promote cancer awareness and support cancer patients.

She is never short of a joke or a laugh and freely shares her experiences in the hope that her story will inspire others. She’s also an enthusiastic proponent of the Relay for Life (www.relayforlife.org.za) and helps to organise the event in her area every year.

Watch a video of Cheryl on the tough choices she faced. #StrongerTogether

Jane is an art director who lives a colourful life in every sense. Obsessed with orange, which she wears almost daily, she never gave a thought to being affected by cancer.

But two years ago that’s exactly what happened. When she was diagnosed with breast cancer she tackled it with vigour and a positive attitude. However, a mastectomy and further major surgery left her body battered and her spirits low.

She rediscovered her strength in the care of those around her – family, friends, colleagues, medical experts and even strangers – living proof of being #StrongerTogether. Today she is once more enjoying an active lifestyle and watching her eight-year-old daughter grow into a graceful young woman.

Has your life been touched by cancer? Share the story and inspire others, and 1Life might surprise you with the experience of a lifetime. #StrongerTogether.

We live in a world where facts and fiction get blurred
In times of uncertainty you need journalism you can trust. For 14 free days, you can have access to a world of in-depth analyses, investigative journalism, top opinions and a range of features. Journalism strengthens democracy. Invest in the future today. Thereafter you will be billed R75 per month. You can cancel anytime and if you cancel within 14 days you won't be billed.
Subscribe to News24
Related Links
Two brave women living with cancer
8 simple things you can do to cut your cancer risk
Next on Life
Ashley Graham has hit back at fat-shamers and insisted haters can only put you down if "they are given power"