You can do yoga on the beach, in the veld, on rooftops and even in a hammock suspended from the ceiling. So a heated inflatable tent was the next logical step, right? Apparently not. In fact, of our group of five yogis who signed up for the Hotpod yoga class, one had to pull out on account of low blood pressure, two were prone to claustrophobia and another mumbled something about ceiling condensation. Plus, we were all exhausted, having woken up what felt like days earlier to catch the red-eye and then spend the day in back-to-back meetings. So all in all, it was a nervous and tired bunch that arrived to yoga it up in the pod. The experience was totally different from what any of us had expected.

The pod is bigger than you think

It’s also indoors – like a jumping castle meets fort in the lounge – but can be set up pretty much anywhere. It takes twenty people, plus an instructor, and there’s plenty of room inside to move around freely without whacking anyone in the face. You can even stand up inside. If you’re worried about feeling claustrophobic, grab a spot in the middle of the back row, closest to the entrance, which zips open and closed like a tent. 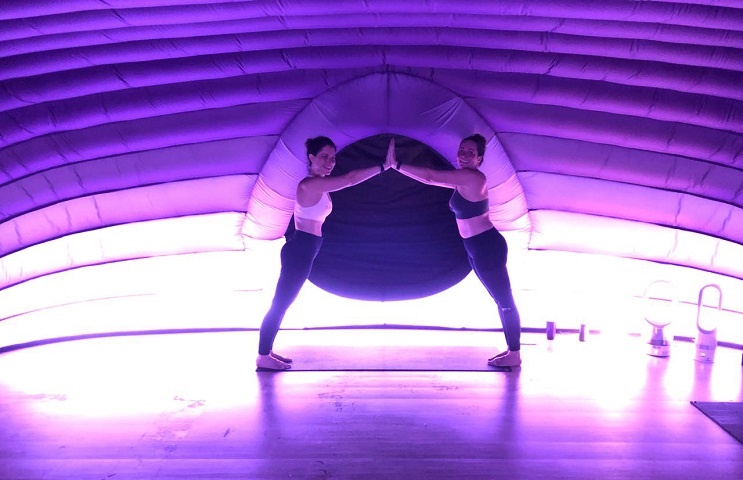 READ MORE: 6 amazing things you probably didn’t know yoga can do for your body

No need to take a mat

Mats are supplied at no charge. They’ll already be laid out when you arrive, but get there early to bag a good spot. Tip: You want to be as far away from the heater as possible – there’ll be plenty of warmth to go round without you getting it full-on at close range. You’ll also need a big towel (available to hire at a small cost or bring your own) and a water bottle. Whatever you do, don't forget your sweat towel!

If you’ve ever been to a heated yoga class, you’ll know that you will sweat. A lot. This isn’t the time for a thick cotton t-shirt. Pods are heated to 37 degrees, so it’s not quite up there with a Bikram studio, but still balmy. Despite the heat and sweat, though, there was no condensation on the ceiling dripping down on us (I checked – repeatedly). The mats and floor get swabbed down after every class and the towels washed. Keep your outfit light and sweat-wicking like we did!

READ MORE: “I tried hot yoga — and these are the 10 hard lessons I learnt”

It’s not a traditional yoga class

The sequences are based on Vinyasa-style flows and mix active movements with static postures. But if your idea of yoga is solemn and chanty, you’re in for a surprise. We slipped into the pod a few minutes before class was scheduled to start. So I expected to enter a space of silence and dogged non-judgement as rows of yogis fought the urge to be annoyed about four late newbies disturbing their pre-class Shavasana. Instead, we found yogis sitting on their mats in twos and threes, sharing office skinder and weekend plans. The class itself was similarly lighthearted, with chirping and laughing not frowned upon, but encouraged. There was even a “break” for playing around with handstands. Remember the rag-tag group of reluctant yogis who sneaked into the pod with minutes to spare? Well, an hour later, we hit the showers flushed, energised and chatty. I always feel more lively after a yoga class, but the effect was amplified by the contrast of 60 minutes in a dim, purple lit, heated tent and the blast of cold night air that hits you as you emerge from your vagina-like cocoon.

So, would I do it again?

Absolutely! Hotpod Yoga has just opened their first pod in Cape Town and I’m looking forward to dropping in for another class. Want to give it a try? You can pay a drop-in rate for a single class (R140) or choose from various package and membership options. Click here to book your class.

This article was originally published on Women's Health SA

We live in a world where facts and fiction get blurred
In times of uncertainty you need journalism you can trust. For 14 free days, you can have access to a world of in-depth analyses, investigative journalism, top opinions and a range of features. Journalism strengthens democracy. Invest in the future today. Thereafter you will be billed R75 per month. You can cancel anytime and if you cancel within 14 days you won't be billed.
Subscribe to News24
Related Links
Cape Town yoga studio under fire after woman posts Facebook video alleging racist comments from...
“I gained 10kg of lean muscle mass — here’s how I did it”
“I went from chubby, to skinny, to finally being fit and thick”
Next on W24
Five advances in women’s health that are worth celebrating