A baby girl pictured with her father.

It's not unusual for active social media users to use FaceTune and the likes to do a virtual nip/tuck job on some of their pictures before posting them on social media.

If anything, it's become common practice, especially in the beauty blogger/vlogger and makeup artist community where photo editing apps are used to enhance colours rather than to "deceive" (for lack of a better term).

However, these photo editing apps are sometimes used to portray what some would call an "unrealistic" image of one's appearance. This is why they remain a highly contentious issue in an industry that is only now trying to subvert the harmful effects of decades' long beauty standards that have been on imposed young girls and women.

And honestly, it's okay to give yourself clearer skin, plus curves here and there because what you do with your own images is your business. But perhaps the issue is when people in positions of influence feed that image to us as a true portrayal of what they look like - it's an unhealthy diet for any impressionable minds to be living on.

This is why certain celebrities have gone on social media fasts, suggested that photo editing apps be banned, and visual projects such as #SelfieHarm exist.

So why then has the manipulation of images now trickled all the way down to baby photos?

Posting images of minors on public platforms is already stepping on iffy territory, and editing their images to achieve "perfection" is highly disconcerting.

You may be familiar with social media accounts such as Cute Black Babies on Twitter and @igslaykids on Instagram, which share pictures of toddlers who are indeed very adorable and well dressed. These sort of accounts are like crack for your uterus - proceed with caution.

How im tryna be all summer '19 pic.twitter.com/hDZqj0fztn

But recently, a not-so-feel-good side of accounts of this nature has been exposed. It would appear that some of the baby posts we goo-goo gaga over are not accurate representations of these black infants and toddlers, as they have been photoshopped to make them look racially ambiguous or mixed, according to this Twitter user's thread:

These accounts that compile pictures of cute black babies are getting weirder and weirder and I don't want to follow them anymore.

Look at this beautiful baby, first picture as posted by her dad. But the baby was clearly not mixed enough for Kids_Slay. They had to give her pink lips and blue eyes. pic.twitter.com/N8eQlxKuLf

When this thread fast gained traction, a few other users remarked about the unsettling obsession with mixed babies, where one user who used to be a social worker recalled that the foster agency they worked for seemed to be prioritising mixed children;

When I was a social worker, one of the foster parents the agency I worked for ran a FB page to help find more poetential foster parents, but it seemed they only would post about the mixed children that just entered custody. “I love em mixed” was once a comment... https://t.co/zucNyQOxtO

Apparently the objective behind these doctored images of black babies is to benefit the interracial dating cyber community, where couples hope to one day manufacture mixed race offspring, Kardashian Klan style. And the word "manufacture" is used intentionally in this context.

It appears that they also run an interracial dating site so that you, too, can have mixed babies of your own. ?? pic.twitter.com/1zmJhId5nu

Speaking of the Kardashians, Khloe's daughter True Thompson, was subjected to colourism very soon after her doting mom shared a picture of her on social media in 2018. She was ridiculed for being slightly darker than her cousins Stormi and Chicago.

This might be why Khloe - who's also had to deal with her fair share of body image issues - started using FaceTune and various filters on True's pictures until recently.

All of this is indicative of not only colourism, but how the privileges associated with racial ambiguity as well as proximity to whiteness have created a social media culture that renders their beauty top tier over the rest, and it now also affects children.

The babies may be unaware now, but what impact will this have on the way they see themselves when they grow up?

In a previous article on W24 about the pressure fans put on celebrities to share their babies online, a Durban-based psychologist explained how "everything we post contributes to our child’s online reputation – a record of shared pictures and comments that’s virtually impossible to delete," further adding that "it’s easy to ‘label’ your child through your posts, presenting them as a particular ‘type’, even when this doesn’t accurately reflect their personality."

In this case, it would be the child's appearance, which we all know plays a huge role in self-esteem, especially with girl children who often have beauty standards imposed on them from a very early age.

Parent24 also weighed in on the dangers of sharenting earlier this year, expressing that it's not necessarily parents who are at fault for sharing moments with their kids online, but rather it's audiences and companies who have other (sometimes) sinister intentions as they said "sharenting tells them what your child looks like, when she was born, what she likes to do, when she hits her developmental milestones and more. These platforms pursue a business model predicated on knowing users – perhaps more deeply than they know themselves – and using that knowledge to their own ends."

And this is exactly the model that the kids_slay Instagram account was operating on before a good Samaritan took over the account. This account was adding 'Eurocentric' features to black babies in order to create a desire for mixed race kids, which would in turn ensure that the online interracial dating market expands enough for their sister app (below) to gain more users. 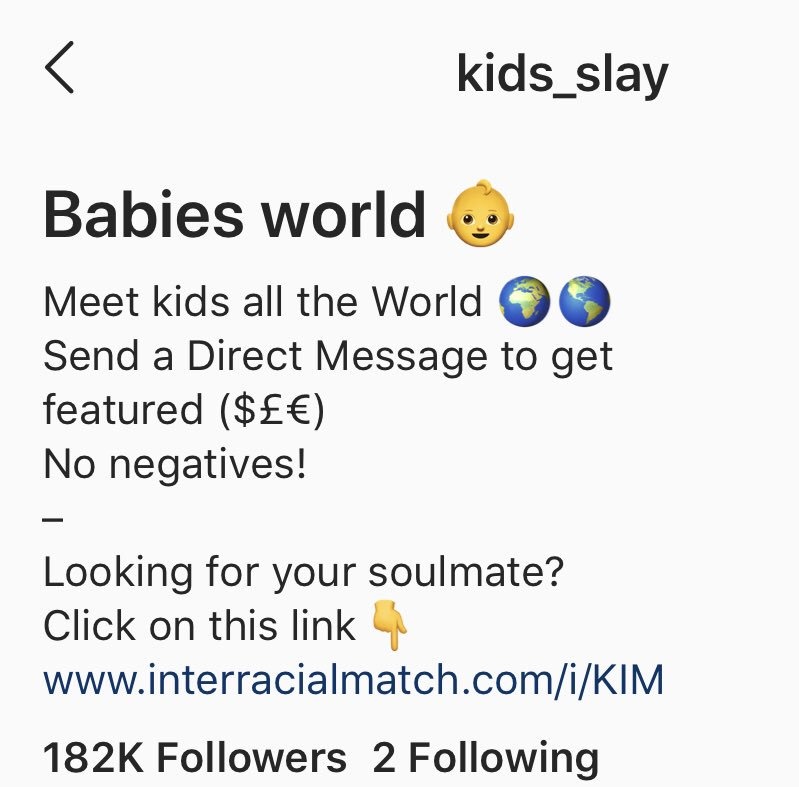 The @kids_slay account which was editing baby pictures to push a mixed race baby agenda has since rebranded under new management and had its bio changed to the following PSA;

People need to stop being overly obsessed with mixed kids. ps. I took this user so the weirdos cant get it back

We live in a world where facts and fiction get blurred
In times of uncertainty you need journalism you can trust. For 14 free days, you can have access to a world of in-depth analyses, investigative journalism, top opinions and a range of features. Journalism strengthens democracy. Invest in the future today. Thereafter you will be billed R75 per month. You can cancel anytime and if you cancel within 14 days you won't be billed.
Subscribe to News24
Related Links
Kylie Jenner praised for combing baby Stormi’s hair and laying her edges
"North West already contours better than I do"
These celebrities are trademarking their names and the names of their children – and you can too
Next on W24
Why the human mind is not meant to be awake after midnight