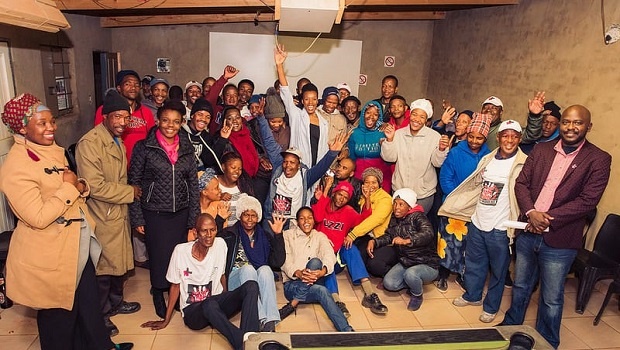 HeforShe members after attending a community dialogue in a tavern

With the issue of gender-based violence and violence against children on the rise in South Africa, it is not enough that women be the only ones fighting against the presence and increase of cases.

Men need to be involved as well, and that is what the HeforShe Taverns project aims to facilitate. Implemented by the Southern African Catholic Bishops’ Conference (SACBC) Justice and Peace Commission and Klerksdorp Diocese in North West Province, the initiative wants to create conversations between men - and women - about the violence in their communities.

READ MORE: Babes Wodumo speaks out about that interview with Metro FM and says she never got an apology

The project, now with 144 taverns involved, is a localised edition of the HeforShe initiative established by United Nations Women, and it aims to encourage solidarity in the fight against violence against women and children. The project was recently showcased in New York on 26th September at a United Nations Impact summit event.

We spoke to Robert Mafinyori, who is a coordinator working with HeforShe Taverns, about the initiative and he told us that they have taken this campaign and endorsed it in fighting violence against women and children. "[We are] calling all men to be at the forefront of fighting this violence in the community," he says.

Robert explains that they use taverns as a place where men can meet and open dialogues around the violence against women and children. "At the heart of these interventions, we are trying to fight alcohol-related violence [and] we are using taverns owners as the gatekeepers." He adds that, as part of this initiative, tavern owners are encouraged to have a zero tolerance attitude when it comes to acts of violence within their establishments and their communities as a whole.

READ MORE: Demi-Leigh Nel Peters, K-pop and a Youtube sensation - why the 73rd U.N. General Assembly was all about the youth

Robert confirms that since the project has been implemented, women have felt safer in respective community spaces and in taverns, and that men have been more involved in creating safe spaces for women and children. Moreover, the project also encourages tavern owners to organise testing events for HIV, high blood pressure, and other health issues in support of local clinics.

As a church-led organisation, the organisers of HeforShe Taverns are reaching out to church leaders of various faiths to join the movement and expand the reach. It is a private project which is mainly based in Klerksdorp, however they currently planning to extend it to the Eastern Cape, Witbank, and Mamelodi, Robert explains.

Are there any initiatives in your community that are joining the fight against violence against women and children? Tell us about them.

We live in a world where facts and fiction get blurred
In times of uncertainty you need journalism you can trust. For 14 free days, you can have access to a world of in-depth analyses, investigative journalism, top opinions and a range of features. Journalism strengthens democracy. Invest in the future today. Thereafter you will be billed R75 per month. You can cancel anytime and if you cancel within 14 days you won't be billed.
Subscribe to News24
Related Links
AT A GLANCE: Gauteng has the highest number of reported rape cases in SA
"You burned my food" - and more horrifying reasons men give their partners to justify domestic...
A UCT lecturer blames depression for disturbing rant about rape and murder – can mental health...
Next on W24
3 ways to tackle the ‘Sunday scaries’, the anxiety and dread many people feel at the end of the weekend