How do homeless women handle menstruation? 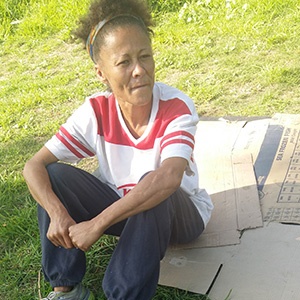 Image: Lynn Butler
I walk past a group of homeless people three times a week en route to university, and although I greet them, I try to avoid getting sucked into conversations. I know, I’m terrible. One day, I was feeling moody – I was on my period and had PMS – and suddenly thought to myself, “what do homeless women do when they get their monthlies?”

I never look forward to mine and when it inevitably happens, I just rummage around in my handbag or medicine cabinet for a pad or tampon, but when you’re homeless, surely it must be a nightmare?

So with this question looming in my mind, I walked over to them and asked if I could discuss this incredibly personal and sensitive situation. They were very eager to talk to me about their experience.

This is their story.

Zoe and Julia sit on placards and newspapers, which also double as a makeshift bed. Julia quickly tells me that her periods make her weak and that she finds it difficult to deal with.

“I calculate my period’s cycle and like the week before I get my periods, I know I need to eat a meat and more protein. And because I can’t buy anything, I just become weak,” says Julia.

I half sit, half squat, too afraid to touch the ground which is littered with trash - flies are everywhere. I can’t help but notice the unappealing smell that reminds me of a dirty garbage bin. READ: Me, myself and my disgusting period

“One day he [referring to her boyfriend] asked me what smells like old and dry blood and I told him that it was me. It’s so embarrassing, but you can’t help it,” said Julia, who washes daily, but can’t clean herself properly as she cannot afford to waste water.

“I start very heavy so I sometimes use two pads a day, but I don’t like to, because I have to save as much as possible,” adds Julia. “The blood is sticking onto my skin. I have no pain tablets, so I have to do the best I can do. I crave all sorts of food, especially meat and cake. I miss eating chocolates."

In a 2011 article by Jen Thorpe, she claims that on average a woman spends R36 per period when using pads. This amounts to approximately R19 800 in her lifetime. Earlier this year, certain members of Parliament asked the government to scrap the VAT on sanitary towels in order to provide easier access for poor women across the country, as it is estimated that there are 7 million girls missing school each month, because they are unable to get access to feminine hygiene products.

So what do they use if they cannot buy any sanitary products?

“Sometimes we have to use cloths, because we’re not always at home [gesturing to the surrounding area],” says Zoe. Using old cloths as a means to stem flow is an occurrence across the poorer areas of the world. Earlier this year, the story of Arunachalam Muruganantham, a man who started a menstruation revolution in India after his wife used old rags as a sanitary pad, broke across social and traditional media.

What about shelters and charities?

There are those who help. Zoe recounts a time when a family came up to them one day and handed out bread and pads to various people on the streets, “For two days, I had my periods and I didn’t have money and they actually brought me pads.”

Julia’s boyfriend adds that once in a while they [the homeless shelters] give something, but it’s not every day. I jokingly ask him how he handles Julia’s periods and Zoe shouts, “They run away!” Julia’s boyfriend denies this. “I don’t run away, I’m under pressure. They work on my nerves, but I just turn my back and let her be.” READ: Are you suffering from undiagnosed endometriosis?

But that's not their only concern

Zoe speaks about dealing with her periods and her chronic disease, “I have Lupus and being homeless, no one - not even my boyfriend - understands. And we are not [here] all the time [mentioning their shelter situated in Jutland Park in the Gardens], the law enforcement breaks down our home in the middle of the night.”

Julia adds, “One day in the middle of the night, our home got messed up. I was bleeding and it’s cold and you’re paining and you just feel like crying. And they [the law enforcement] take all your stuff,” Julia sobs and continues, “Even when it rains, you are sweating and you’re bleeding. We had nothing, we had to sleep on the ground and they took our bedding and stuff.”

Zoe interrupts saying, “They threw down everything. They are not supposed to take our bedding. It’s more the cardboard [they take] and then what they do with it they sell the stuff. If you think I’m lying, I can show you that they sell it under the bridge.”

It is soon clear that these women suffer many indignities and upsets – from the treatment they get from law enforcement to getting robbed frequently.

“I remember one night, I had my periods and I looked, because I was waiting on my boyfriend to bring me pads and it [the robbery] happened.”

“They are robbing us,” chants Julia twice.

READ: 7 things we can do to help the homeless

Unfortunately, hygiene products are rarely donated, particular sanitary towels. We spoke to the CEO of the Haven Night Shelter, Hassan Khan, about this issue and he said the following:

"We have what you call a comfort pack and when people come into the Haven and if they require it, they will be provided with it, which includes soap, face cloth, toothbrush, razer, sanitary towels and maybe a beanie, if it’s cold and socks. We have hosts in the Haven and when they [women] require sanitary towels, they will assist in giving them. People don’t regularly make those donations, but you can make a selection so that you can influence what you give to the Haven.

"We don’t give any person a comfort pack if they live on the streets.That’s a principle in the Haven and when they approach the Haven, we invite them inside with some tea and coffee, depending on the time of day and what’s available. We try and persuade them to use Haven, as a means, to try and get them off the street. Our job is always to get them into the Haven and out of the Haven, back into the community and reunite them with their families."

Yes, even homeless women get their periods, or have you forgotten?! One of the most heartwarming things I've ever done. Will be on @women24com soon. #menstruationmatters #homelessness #homelesswomen #journalism #letsstartarevolution

We live in a world where facts and fiction get blurred
In times of uncertainty you need journalism you can trust. For 14 free days, you can have access to a world of in-depth analyses, investigative journalism, top opinions and a range of features. Journalism strengthens democracy. Invest in the future today. Thereafter you will be billed R75 per month. You can cancel anytime and if you cancel within 14 days you won't be billed.
Subscribe to News24
Related Links
How do homeless women handle menstruation?
We need to start talking about periods
What causes period pain?
Next on W24
'Travel therapy' could improve your mental health