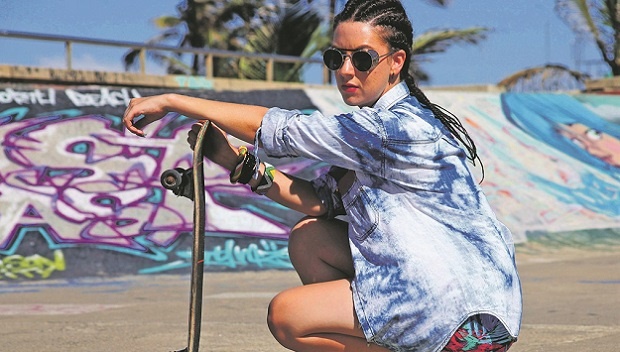 This is the question Anita Ronge provoked this week when she made headlines for her assumed Kasi Mlungu persona.

For many, the story of the commercial house music deejay elicited anger, something Ronge claims not to understand and brushes off as “negativity”.

The 26-year-old says she embodies all her personas: Anita Ronge, DJ DuchAz, and Kasi Mlungu.

She is the Afrikaans woman from Kempton Park on Gauteng’s East Rand; the deejay who hopes to release an album by the end of the year; and the person you will find partying in Tembisa with friends, eating her favourite township snacks.

In short, she is a brand. But is she also a hustler who found a way to break into mainstream media and grow her brand?

Ronge is on the phone from Durban for what should have been a holiday, but turned into work.

“I am gigging here this weekend after people found out I’m around. I can never say no to the hustle,” she said.

Ronge was born in Newcastle in KwaZulu-Natal. Her family moved to Kempton Park when she was five years old. A laat lammetjie, she is the youngest of three siblings.

Her father died when she was 12 and the family hit hard times. She had to start working when she was 15, doing mainly promotional work.

It was at Laerskool Impala and Hoërskool Kempton Park where she befriended black pupils, and where she felt her first backlash from being white in a black world.

The DuchAz persona was born when Ronge was taught to deejay by friends in Hammanskraal, who soon called her Kasi Mlungu.

Asked what she understood white privilege to be, Ronge said: “I feel like you get ahead in life because of the colour of your skin.”

During a radio interview this week, Ronge said she did not believe she was racially privileged.

“I have worked myself to death to get to where I am. I feel like house music is my culture and I cannot really define it to a specific culture. I just feel like South Africa should be one, and that we should not be separated under different cultures.”

Ronge’s interviews and tweets this week reveal a naiveté that has earned her the wrath of black Twitter.

She has been photographed posing seductively while holding snacks, dressed in traditional attire.

In one picture, she holds umshanelo (a grass broom) and says: “I get rejected for not being ‘black enough’ and being ‘too black’ to be white ... I’m #KasiMlungu & I’m proud.”

She told City Press: “I feel like people misunderstood the whole photoshoot because it was basically one of my friends from Tembisa who had the idea of trying to put in pictures who I am and what I mean to Tembisa.

“That is the reason for the photoshoot: to express what I mean to them [the Tembisa community], because I am the Kasi Mlungu of Tembisa.”

Asked if she was romanticising poverty, she said: “My Kasi Mlungu name is not my doing; it was given to me.”

And on the subject of whether she knew that black people lived in townships because they were forcibly moved there by the apartheid regime, which had created these areas, Ronge said: “A lot of people do have a choice [of whether] to stay there or to move out.

“Anyone can do whatever they want to in this country, which is the great part of living in our country. So, why not explore the entire South Africa? I feel like we should move past the past of South Africa.”

In response to many people having felt disrespected by her tweet – referred to above – about being rejected for not being black enough, Ronge said: “In general, I do not bother myself with negative people.

Apart from the negative comments I have been getting on Twitter, I have received triple as many positive messages on a more personal level.

“Regarding the negative stuff that I get from people on a public platform now, no one inboxes me and says, ‘What you are doing is wrong.’ Which I find strange. Why can’t you inbox me and tell me on a personal level that what I’m doing is wrong? That is something I am yet to understand.”

Ronge said she had not written off being an Afrikaner.

“It is an important part of my life. It is how I grew up. [I come from a] predominantly Afrikaans family and I feel for a person who grew up Afrikaans – society dictates life to you.

“If you are an Afrikaans girl, you are supposed to do this and that, and I want to show people that you can be whatever you want to be.

“I am just comfortable with my identity and the way I identify myself with both cultures. I do not identify with one more than the other. Our country should be a no-colour country.”

Is it worth noting at all that a white woman hangs out ekasi? Aren’t we past this yet as a country?

SMS us on 35697 using the keyword EKASI and tell us what you think. Please include your name and province. SMSes cost R1.50