Two friends embracing each other with care

However, the vast majority of allegations go unreported, and those who do report tend to face troubling outcomes.

We found that nearly all sexual harassment goes unreported, and those that do report tend to face severe retribution and limited redress.

Of those whole file a charge, only 1 800 will receive any redress. How do employers respond to sexual harassment complaints?

Almost two-thirds of people who file a charge lose their jobs as a result of their complaint. Our analysis shows that job loss is somewhat higher among white women and men who file sexual harassment charges, while retaliation is somewhat higher for black women. This pattern of extreme retribution fits with past research. Employers, following the advice of legal counsel, often react to internal discrimination complaints with aggressive attacks on those who complain. This tactic is designed to isolate the charging party and to send a message to other workers that the cost of pursuing legal remedies to discrimination will be prohibitively high.

Are there any benefits to filing a sexual harassment charge?

After the charge is filed, the EEOC has several routes to resolve charges, any of which can lead to monetary or other benefits for the charging party.

On intake, the EEOC judges 88 percent of sexual harassment charges as plausibly legally actionable. Many of the rest are excluded for administrative reasons, such as late filing. False claims appear to be quite rare.

But outcomes for most sexual harassment charges are much smaller. Charging parties who received monetary compensation for being sexual harassed at work were awarded $24 700 on average. About half received less than $10 000.

Big paydays for sexual harassment discrimination charges are vanishingly rare – only 1 percent of charges resulted in monetary compensation over $100 000. 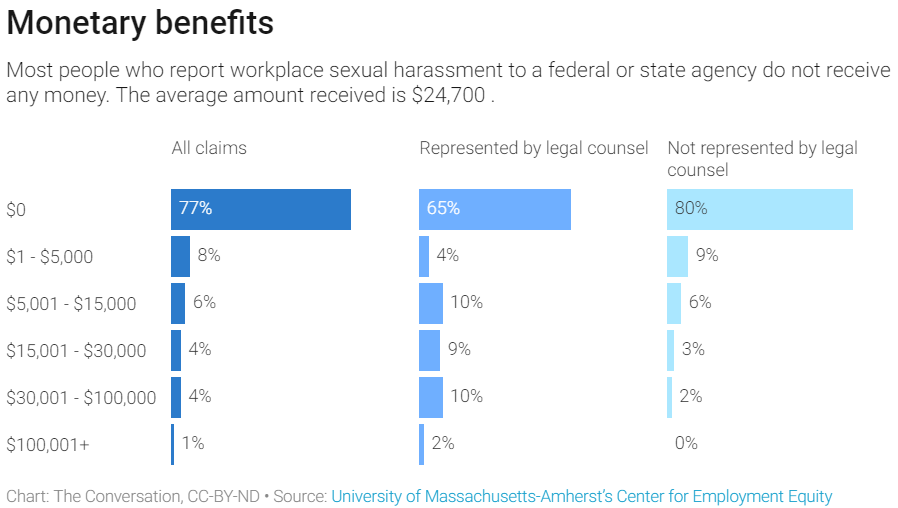 Only 12 percent of cases result in some agreement to change workplace practices.

Are harassment claims a legal problem or managerial problem?Current practices do not appear to serve charging parties well. Most cases appear legally plausible, but most receive no benefits. For those who do receive money, the amount is typically meager, typically less than $10 000, even when someone loses his or her job in the process.

We believe that the current legal route is unlikely to create safer, less abusive workplaces. Sexual harassment, and perhaps discrimination of all types, might be better addressed by managers treating harassment claims as managerial responsibilities, rather than outsourcing them as strictly legal problems.

Past research suggests that the most effective routes to ending sexual harassment and other forms of discrimination are through getting managers to take ownership of the problem.

The EEOC made precisely this recommendation in its 2016 report on harassment. To educate employers as to how to reduce sexual and other forms of harassment at work, the agency has introduced training courses in managerial practices and the creation of respectful workplaces.

We think that shifting responsibility from the law to management makes good business, moral and even legal sense.

We live in a world where facts and fiction get blurred
In times of uncertainty you need journalism you can trust. For 14 free days, you can have access to a world of in-depth analyses, investigative journalism, top opinions and a range of features. Journalism strengthens democracy. Invest in the future today. Thereafter you will be billed R75 per month. You can cancel anytime and if you cancel within 14 days you won't be billed.
Subscribe to News24
Related Links
"I was actually sleeping... it's rape"
Victim-blaming culture holds back #MeToo in Indonesia
Activists call on Beyoncé to cancel her Top Shop and Ivy Park deal
Next on W24
Why the human mind is not meant to be awake after midnight