OPINION | Women’s Month has come and gone - what exactly has it done for women? Protesters march against gender-based violence, organised by several NGO?s and organisations at the JSE in Sandton on September 13, 2019 in Sandton, South Africa. There had been a public outcry after the rape and murder of UCT student Uyinene Mrwetyana in Cape Town. Photo by Alet Pretorius/ Gallo Images via Getty Images

This year, I attended a number of virtual seminars and events for Women's Month. Unfortunately, when you live in a country where the killing of women is so common, it's hard to get past that to commemorate and celebrate women's achievements.

It's been such a conflicting period lined with so much pain that's hard to comprehend. I understand the legacy of Women's Day and feel a deep conviction to celebrate and honour the women of 1956 because they laid a solid foundation for the women of South Africa, which should have been cemented by a commitment to ensure women are safe in this country.

My great aunt, whom I'm named after, was shot from the back and killed at the Sharpeville Massacre, which was also a march against pass laws on 21 March 1960. Her name was Elizabeth Mthimkulu. She was 33. Many other people have died for the democracy we live in today.

However, their very legacy is being spat on by a government that allows women to get killed and abused every day. It's said that we live in a free country, but how free are we really? Until gender-based violence becomes something more than a fancy phrase that precedes summit titles and sections in speeches, I will not be signing up to celebrate anything during Women's Month ever again. If the fear and anxiety that we live under is freedom, then I don't want it.

Last year during Women's Month, Luyanda Botha, a post office employee from Claremont, Cape Town, decided to rape and kill Uyinene Mrwetyana. He was given three life sentences for his crime, however, as Judge Gayaat Salie-Hlophe put it, no sentence by a court can ever bring her back.

When Uyinene was killed, it was an extremely scary and emotionally fuelled time for the women in this country. For the first time, I had hope that our cries would surely be heard this time - I've never been more wrong.

Before that, Karabo Mokoena had made headlines for a similarly gruesome killing. When Uyinene passed, I spoke to Karabo's mom and sister, and both admitted their pain was still raw. And every time a young woman's life is snuffed out, they relive the pain of losing their loved one.

Sandile Mantsoe, who killed Karabo, had smiled and laughed with his supporters during his court hearings and was given a 32-year sentence for his crime. He is alive and has a second chance at life - he breathes, eats, and laughs - maybe he even recounts how he butchered and tried to burn Karabo's body beyond recognition. So does Luyanda Botha. A few other murderers will too - most will walk free and kill you or me if they feel like it.

Karabo and Uyinene's families know their children will never live another day - instead, they have to mourn them repeatedly every time a woman is killed in this country. This year, they mourned with the family of Tshegofatso Pule, who was pregnant when she was killed. Her body was found hanging from a tree in Roodepoort.

Thousands of women, unnamed and unaccounted for, are trafficked, killed, abused, and tortured in this country. Do a Google search of the phrase "woman killed", and you will come up with hundreds of articles detailing gruesome killings of women that go unsolved and unpunished - this is just a trickle of reality as most cases are not reported in the media.

To this day, killers remain free to kill women, knowing that they will be reprimanded in some or other official speech, and at worst, get a jail term equivalent to a slap on the wrist.

I spoke to other women at W24 about their experiences of Women's Month and Phelokazi Mbude felt we should keep Women's Day and Women's Month as a time of remembrance, looking back at the historical events that define our country now.

She adds: "We can spend it as a time to revisit the legacies of the women who led the movement, to re-educate ourselves and ensure what was fought is not lost in politricks and performative ally-ship. When it comes to addressing social ills against women, it's as simple as men stopping committing crimes. Our government and its law enforcement channels should implement the detailed solutions and suggestions handed to them by the women of The Total Shutdown movement and the activists before them. The solutions to address gender-based violence exist; it's the will to do so that seems to be lacking."

Afika Jadezweni had this to say: "Now that the whole performance of Women's Month campaigns is no longer getting applause, I think it's time for brands, institutions, and organisations to bow out. We've had enough of all the grandstanding. From the empowerment brunches that don't open the doors of access to fellow women in need of mentorship; funding or for someone to hear their business pitch out; to GBV's bang on the door that's getting louder and louder to a government that exclaims, 'I'm not here!' in response from the comfort of their parliamentary seats - there is clearly nothing observing this month has achieved besides exactly that... observing - acknowledging that it's August and seeing more injustices performed against women. We should've known when activism against the abuse of women and children was only allocated a measly 16 days in a year that women in this country are not considered a priority all those years ago."

As for me, I'm quite disillusioned and should probably accept that the hope I had when Uyinene's murder seemed to jog government into action was wishful thinking. We will continue to write more "Woman Killed" headlines. We are alone - every month of the year, including Women's Month.

In the meantime, if you or someone you know needs help, you can contact one of the organisations below:

We live in a world where facts and fiction get blurred
In times of uncertainty you need journalism you can trust. For only R75 per month, you have access to a world of in-depth analyses, investigative journalism, top opinions and a range of features. Journalism strengthens democracy. Invest in the future today.
Subscribe to News24
Next on W24
Artists opts to have leg amputated years after cancer op despite contrary advice, she’s much happier 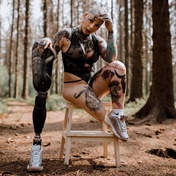 Subscribe to newsletters
Voting Booth
What are you most looking forward to buying this Black Friday?
Please select an option Oops! Something went wrong, please try again later.
It looks like the pandemic is still far from over, so more loungewear
17% - 21 votes
The lockdown has made me want to invest more in homeware and furniture, so I'll be adding those to my Black Friday cart
28% - 34 votes
I'm going to use it to get a headstart on Christmas gifting
36% - 43 votes
Footwear is all about comfort this year, so definitely sneakers
13% - 16 votes
It's a good time to get discounted wigs and other beauty essentials
6% - 7 votes
Previous Results
Fashion
We've marked glossy lips and sleek hair as must-do beauty looks seen on the 2020...