We understand the intention of public acts of comedy is to put smiles on the faces of unsuspecting strangers, but sometimes things go a little too far. And pretending to give strangers unsolicited haircuts is quite the opposite of funny.

This was the case with an incident that took place in Pick n Pay Cavendish Square this week, where a Cape Town resident who would prefer to go just by her first name, Jessica, found herself as the subject of a social media prank.

Jessica told W24 that while she was shopping for a few sundry items, she suddenly heard a buzzing sound behind her head, which shocked her into "yelling, shouting and swearing" at the Instagram prankster with an electric razor behind her.

She explains that the young man, Dylan Wannenberg, was only pretending to shave off her ponytail and never intended to actually cut her hair, but it startled her nonetheless. Understandably so.

This is how Jessica further detailed the incident on Instagram: 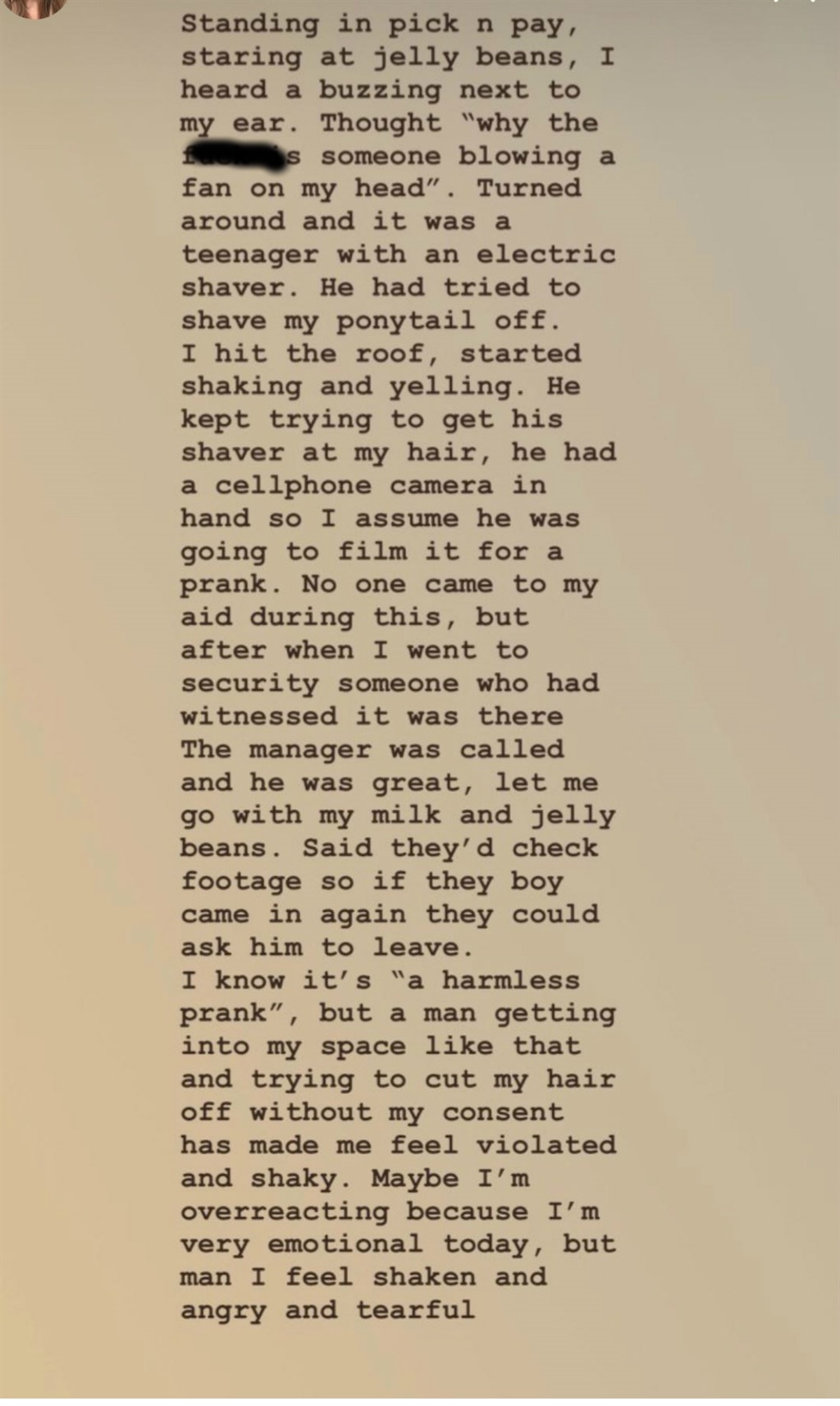 The 20-year-old Instagram content creator who also goes by DJ Wanners, posted the now deleted video on his feed, captioning it as follows;

“If anyone is looking for a free haircut hmu. Hope you all get your Freshcut Friday tomorrow!…”

This video formed part of his year-long series of recorded pranks, which he plays on strangers all over Cape Town - from libraries to grocery stores to the V&A Waterfront.

Dylan explained that the intention of his videos is never to harm, but to "make people laugh".

"I don't do it to hurt anyone," he emphasised.

The IG aspiring comedian also added that he draws his inspiration from Leon Schuster, and anyone who has seen a Leon Schuster film - a repeat offender of blackface - would know how taking a page out of his book is bound to land you in hot water sooner rather than later.

In light of this, W24 asked Dylan if the subjects of his pranks are aware that they are on a public platform with an audience of over 9000 followers, a la Schuster's "kyk, daar's a kamera" too-little-too-late disclaimer.

Dylan responded that "not all of them are aware [that the videos are posted]", while also sharing that his brand of humour is inspired by the fact that "people are out looking for laughs".

Doing that thing is not funny. Especially to a woman.

However, this time around, the joke did not land, and a woman was left feeling both violated and humiliated. The young prankster is aware of this, and reveals that he apologised to Jessica, left his details with someone who can reach her and deleted the video as a make-good to her. Again, explaining that the intention was never to cut her (or anyone else's) hair.

No one may have been physically harmed, but this incident still triggered emotional trauma because Jessica had to take half the day off work due to how shaken she was by it.

She recalls asking herself "am I under threat?"

A common reflex in the face of sudden danger is to become temporarily immobile, and that's what this Pick n Pay customer experienced in that moment. She also told us that no one came to assist when the scuffle ensued, saying "it was incredibly frightening".

"Doing that thing is not funny. Especially to a woman," she said.

This is a valid sentiment considering the dangers women in South Africa are faced with daily - what one might think is a harmless joke, could very well be a trigger for someone who has been victimised before or who lives in perpetual fear of one day becoming a statistic.

Yes, even in a grocery store with security at the entrance, we never rule out the possibility of an attack.

What are the implications of such a prank?

Jessica shared how her Twitter community advised her to press charges, as she has a right to, but expressed that she does not have the emotional energy for it.

However, it was quite reassuring to know that both Cavendish Square and Pick n Pay management were hands-on in dousing this fire. When Dylan spoke to us, he was open about the fact that he was contacted by both the relevant parties and asked to remove the footage from his account.

Jessica echoes this, saying "Pick n Pay was very helpful - they declared that he doesn't have permission to [shoot videos of customers] in the store," and hence asked him to take this prank down.

However, Instagram's response to Jessica's attempts at reporting the video was that it "doesn't violate any of their community standards".

"We pride ourselves on providing a safe and friendly environment for all our customers, and do not condone behaviour that makes our customers feel uncomfortable in any way. Permission was not given to film this prank in our store and we have since been in touch with the person responsible. Our store manager immediately assisted the customer concerned and we have been in touch with her again today to make sure she is alright."

Dylan has also since deleted a few other prank videos of this nature off of his account and issued this apology to his followers in an Instagram story: We live in a world where facts and fiction get blurred
In times of uncertainty you need journalism you can trust. For 14 free days, you can have access to a world of in-depth analyses, investigative journalism, top opinions and a range of features. Journalism strengthens democracy. Invest in the future today. Thereafter you will be billed R75 per month. You can cancel anytime and if you cancel within 14 days you won't be billed.
Subscribe to News24
Related Links
Here's a roundup of the most hilarious fashion and beauty pranks we're glad are as real as April...
This wife's hilarious shopping list prank is the perfect trick to get your partner to help you...
Revenge porn: Why do people feel the need to humiliate others by posting their nudes on social...
Next on Life
Why we form false connections and seek attention online instead of nurturing real-life relations