Why President Zuma should step aside 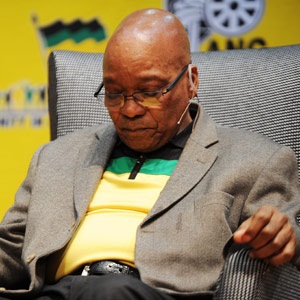 President Jacob Zuma has done it again, but this time, as we count down to the 2014 elections, he should not be allowed to get away with embarrassing blunders that run against all that the South African Constitution stands for.

At Zuma’s inauguration in May 2009, I earned the ire of many in an open letter to the president titled, “Are you fit for office, Mr President?”

In that letter I suggested that a polygamous president, acquitted on a count of rape, but found to have worrying views on women rights is incongruous with the progressive provisions of our Constitution.

I made the point that the tests of leadership go beyond legal technicalities.

My plea that he step aside centred on his sexist utterances and behaviour. As might be expected in our highly patriarchal society, the full might of the ruling African National Congress (ANC), the male-dominated media and various other structures of state came down heavily on this voice of dissent.

Last week our unrepentant sexist president soared to new heights with his comment that South Africans should not think like “Africans in Africa”, and that highways in Johannesburg are not like national roads in Malawi (epitomising the backwardness of the rest of Africa?).

We are told by the presidency that his words have been taken out of context and that the president has apologised to his Malawian counterpart, Joyce Banda. She is the only woman head of state within the Southern African Development Community (SADC) and is current chair of the regional body.

No amount of the veneer used by presidential spokesperson, Mac Maharaj, to paper over this naked statement of cultural imperialism, can hide the truth.

A weekend cartoon best sums him up, depicting Maharaj in so many knots that we could hardly see his face.

If President Zuma believes his fellow citizens are not Africans in Africa, it is little wonder that acts of xenophobia break out, and some South Africans resent the often hard working Southern African migrants. This attitude disregards the many South Africans who took refuge in the region against the onslaught of white racism not so long ago.

Isms and phobias of all types, share a common root – a false superiority that our Constitution, in its fine prose on equality and justice, seeks to abolish.

Whether we are talking about a president who marries as many wives as he wants (perish the thought that they can marry many husbands) or allegedly forced himself on a woman young enough to be his daughter, or believes he has nothing in common with poor Malawians, there is one common thread: the use and abuse of power.

For all his shortcomings, one cannot imagine former president Thabo Mbeki referring to African neighbours in such disparaging tones. He had some moral authority in positioning South Africa to lead the African Renaissance.

Mbeki could also justifiably claim to be spearheading the struggle for the next revolution – gender equality - because in his personal and public life he showed respect for women’s rights.

As former Deputy President Phumzile Mlambo- Ngcuka, now head of UNWOMEN once put it: “you could always count on (Thabo Mbeki) to be on the right side of the argument” where women’s rights were concerned.

Last week’s news brought back the uncomfortable subject of Zuma being acquitted on charges of rape, with the release of the memoirs of the former Director of Public Prosecution Vusi Pikoli.

He says while he accepted the court verdict, he could never understand why the ANC did not conduct an internal disciplinary enquiry into Zuma’s unacceptable conduct and alleged rape of a comrade’s daughter. The ANC also failed to protect her from the onslaught that resulted in her going into exile.

“I was sickened by the behaviour and it really hurt me,” he writes in his book, My Second Initiation.  “Somebody should stand up and say: ‘not in our name’. I am saying that now,” Pikoli adds.

Let’s be honest: over the last four years, gender discourse in South Africa has taken its worst knock in the twenty years of democracy. With little criticism, pictures of rich men marrying five wives at a time, or having lavish parties where they eat sushi off the stomachs of naked women adorn our Sunday newspapers.

The ANC Women’s League, which failed to put up a third option – a woman candidate – in the power struggle between Zuma and Mbeki (throwing its weight behind Zuma) has now declared that South Africa is not ready for a woman president!

As Franz Fanon or Steve Biko might have told us, the litmus test of colonialism is the extent to which the oppressed internalise their own oppression. The ANC Women’s League, once a beacon of hope in a sea of weak women’s political structures, now no longer even believes in itself!

The writing was on the wall when Zuma took over the presidency. Democracy dictated that we overlook all this, accept “the will of the people”, and give him a chance. Democracy also gives us the right to ask again, especially as he gears up for a second term: “Are you fit to lead this nation, President Zuma?”

Once bitten, twice shy! By stepping aside in the coming election race, Zuma would allow the ANC to reclaim its former moral authority, before it is beyond redemption. Is there any doubt that is what the party’s founding fathers and mothers would want? Wake up and smell the coffee, South Africa!

To read more on issues pertaining to gender and equality, visit Gender Links.

We live in a world where facts and fiction get blurred
In times of uncertainty you need journalism you can trust. For only R75 per month, you have access to a world of in-depth analyses, investigative journalism, top opinions and a range of features. Journalism strengthens democracy. Invest in the future today.
Subscribe to News24
Related Links
Actually Mr President, South Africa is in Africa
And you thought we didn’t need feminism
What's the deal with the ANC Women’s League?
Next on W24
How social media can crush your self-esteem