Marion Cotillard is the face of Chanel No.5 (Image supplied by Chanel)
This February, Chanel announced that Marion Cotillard will be the face of the new advertising campaign for the iconic N°5 fragrance. This is the first time that the most respected French actress in Hollywood is lending her image to a fragrance.

The Chanel House describes her as a woman with an "irresistible je ne sais quoi that’s all her own."

And now, to officially celebrate this moment, Chanel invites you to discover the new chapter in the legendary journey of the most famous fragrance in the world, N°5.

"Marion was the obvious choice,” explains Thomas. “Returning to a French actress meant returning to a subconscious image of French femininity dear to the spirit of the House." Marion Cotillard gracefully continues the lineage of feminine icons who have been the face of this olfactory revolution; Marilyn Monroe, who in 1954 dared to talk about nudity dressed in N°5, followed by Catherine Deneuve, Carole Bouquet and Nicole Kidman.

“What I like about Marion Cotillard is that when she acts, she has this sort of reserve that is simultaneously ultra-powerful,” adds Thomas du Pré de Saint Maur. “She seems to know what is right and lively, she is fully committed. Like the Chanel woman, who doesn’t escape herself, but faces herself.”

Beyond her beauty and her free spirit, the actress embodies the indefinable jene sais quoi of French elegance, which we see in this new film directed by Johan Renck - a versatile director who is as well known for his music videos as he is for his advertisements, campaigns, photography, and television shows. The most recent one being multi award-winning series, Chernobyl. Behind the scenes images supplied by CHANEL

The inspiration for this new campaign is a strong woman in love, whose seductiveness unfolds into joy. The song by award-winning artists Lorde that gives rhythm to the film, Team, is recorded by Flavien Berger and covered by Marion Cotillard, and it is an ode to the love where two beings speak as equals.

“We are on each other’s team” is the mantra and chorus that echoes at the nd of the one-minute film.

In this film, Marion even somewhat resembles (at a quick glance) the Team hitmaker as she lends her own vocals to the song.

The dance, like the moon, is “the third actor in this story,” explains Thomas du Pré de Saint Maur. It is the creation of choreographer Ryan Heffington, known for his collaborations with the most prestigious artists of our time. He invented this unique dance, uniting the intimacy of romantic feelings and the magnitude of desire.

The performance was tailored for Marion Cotillard and her partner the Étoile dancer Jérémie Bélingard. The actor completed a five-day training session in order to make the choreography her own and become more natural in her movements. The lovers spin around giddily in a modern and joyful saraband, which “suggests a genuine complicity between men and women, that is a very present theme throughout the film,” adds Thomas.

Chosen by Virginie Viard, Artistic Director of CHANEL Fashion collections the gold- embroidered lace dress accompanies each movement of the actress in her choreography like a luxurious second skin.

“I wanted Marion to perform in a dress that was completely CHANEL, past, present and future. Iconic. We started from the dress worn by Mademoiselle Chanel, immortalised by Cecil Beaton in 1937 which Karl Lagerfeld particularly liked. We adjusted it so that Marion could make it her own, dance in it; we wanted the dress to serve her and not the other way around,” explains Virginie. 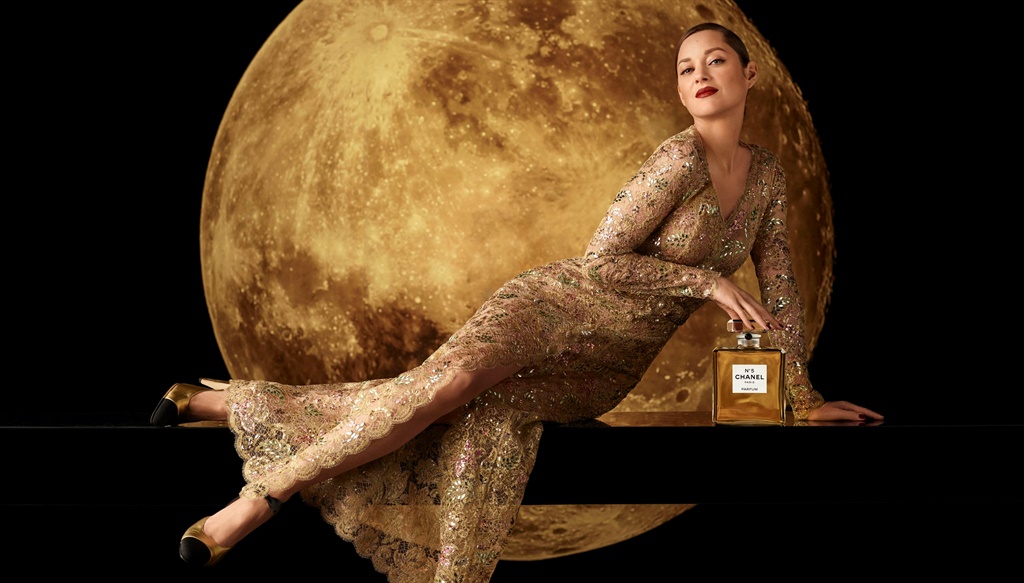 The flowers and foliage pattern embroidery was entrusted to the virtuosity of sixteen Lesage embroiderers. Full of lightness, the dress allows the body to move freely. It required more than 900 hours of work in the CHANEL and Lesage workshops. This new campaign pays tribute to the history of N°5. All press information and images provided by Chanel

We live in a world where facts and fiction get blurred
In times of uncertainty you need journalism you can trust. For 14 free days, you can have access to a world of in-depth analyses, investigative journalism, top opinions and a range of features. Journalism strengthens democracy. Invest in the future today. Thereafter you will be billed R75 per month. You can cancel anytime and if you cancel within 14 days you won't be billed.
Subscribe to News24
Related Links
The new face of the Chanel's iconic N°5 fragrance is Oscar-winning actress Marion Cotillard
Backstage with Lucia Pica: How Chanel's head of beauty achieved this season's must-try makeup looks
U.S. celeb makeup artist Sir John on his latest collab with WBeauty made exclusively for SA women
Next on W24
South Africa among top countries searching for long-lasting perfume for ladies online