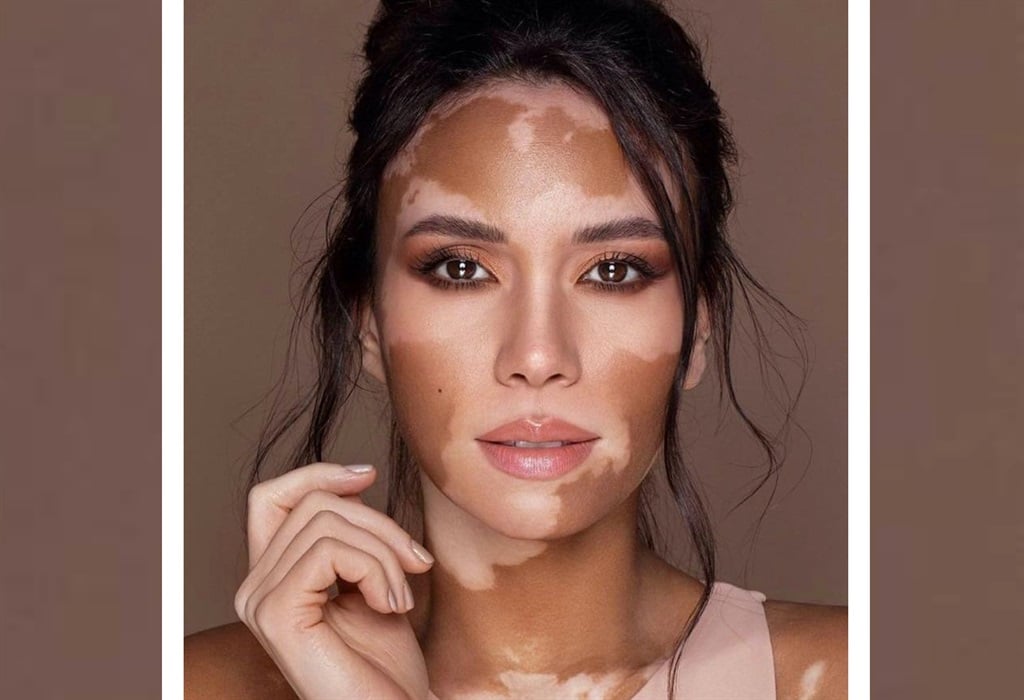 Reham was pleasantly surprised when she was approached by a modelling agency in 2020, which wanted to feature her in a skincare brand. All photos by mediadrumimages.com/@rehamsolima/Magazinefeatures.co.za

Vitiligo advocate Reham Soliman (34) from Cairo, Egypt, was diagnosed with vitiligo at 14-years-old. Reham’s vitiligo started with a dot on her neck and spread to over 60% of her body. Growing up, she was bullied for her skin condition and grew to resent it, feeling unconscious of her skin.

Reham’s vitiligo held her back from many social occasions and tainted the happy moments of her life. She was bullied in school for her skin condition making her more conscious of her look. Reham was pleasantly surprised when she was approached by a modelling agency in 2020, which wanted to feature her in a skincare brand. All photos by  mediadrumimages.com/@rehamsolima/Magazinefeatures.co.za

Reham only gathered the courage to accept her vitiligo six years ago and decided to be herself in all respect and gained a newfound confidence.

Her friends often commented that she looks like Meghan Markle with vitiligo but little did she know that her look would earn her an opportunity to be a model.

She was pleasantly surprised when she was approached by a modelling agency in 2020, which wanted to feature her in a skincare brand. She had not expected that at all, even though she had been told she looked like Meghan Markle with vitiligo.

Reham has gained a lot of confidence through modelling and advocating vitiligo, however, it has not always been a great experience. “A while ago, I was approached by a modelling agency that wanted to feature me as a diverse model. However, when I went to their studio, they had me in for a completely different photo shoot in a different category called TODAA.," says Reham, adding that they were classifying people with unique characteristics and just using the veil of diversity for publicity.

“I asked them not to use my pictures, and I was very disappointed by the agency as a whole after that incident. I have vitiligo, but I am still a human being, I do not like being pigeonholed and categorized and locked in a corner.” Overall, Reham believes her being so confident in her own skin has encouraged others to accept their own flaws.

“I get a lot of positive feedback from people all over the world for my pictures that I did not accept,” she says. “And not just from the vitiligo community but from anyone that does not fit into society’s standards of beauty. People with weight or health problems approach me to say that seeing me makes them feel alright with being different. “People can be different and still live their lives and be happy.”

We live in a world where facts and fiction get blurred
In times of uncertainty you need journalism you can trust. For only R75 per month, you have access to a world of in-depth analyses, investigative journalism, top opinions and a range of features. Journalism strengthens democracy. Invest in the future today.
Subscribe to News24
Next on W24
Skin lighteners: fashion and family still driving uptake in South Africa

Get the newsletter
Voting Booth
Do you think it's important to get married in this day and age?
Please select an option Oops! Something went wrong, please try again later.
Yes, it's important in order to create a family unit and for companionship
60% - 3 votes
Not at all. Being single is far more liberating
0% - 0 votes
There is no general answer to this, it's each to their own
0% - 0 votes
Yes, society still frowns on unmarried people, especially women
0% - 0 votes
It depends on whether you are able to find a compatible partner
40% - 2 votes
Previous Results
Fashion
Paris Haute Couture Week Spring/Summer 22 kicks off on a glorious high