The A-Beauty genre can't credit a single African culture or brand, but we can thank its foremothers

Xhosa, San, and Himba women - some of the foremothers of A-Beauty. (All images via Getty)

Growing up, I lived with my grandmother in the Eastern Cape, who among many other household intrigues, exposed me to DIY beauty practices.

Yes, she loved her 'Oil of Olay' day moisturisers, but she also collected stones and shells from the beach to use as pumice (ukulola) for bath time, kept the orange sack to use as a loofah scrub, wore calamine lotion as sunscreen, and ground her own imbhola for outdoor activities and labour. Her skin is still pretty supple to this day for a woman of her octogenarian age.

See, African women have always been resourceful and innovative, and as such, many cosmetic practices and natural ingredients have been borrowed without much credit (stolen?) from them over the decades.

From the Ancient Egyptians' milk-and-honey baths to the multipurpose Buchu plant of the Cape regions of South Africa to the red ochre used by Himba (OvaHimba) women of Northern Namibia; Africa has always been abundant with natural skincare remedies and rituals.

Several beauty enthusiasts have dabbled in - and enjoyed the benefits of - the K-Beauty and J-Beauty cosmetic genres, and now the A-Beauty (African/Ancestral Beauty) trend is also gaining the mainstream attention of its Asian counterparts.

But let me offer this disclaimer first; A-Beauty is neither led nor does it belong to a single brand. Rather, it is an ever-evolving cosmetic practice whose origins and materials - albeit now commercialised - should never go unacknowledged.

If anything, many South Africans have probably been A-Beauty-ing all their life without attributing a title to the practice.

Additionally, each African continent and cultural group has - over centuries - contributed something to what has now been dubbed A-Beauty in the commercial beauty sector, but as BoF highlights; what makes A-Beauty what it is in a modern context are the "African ingredients, African entrepreneurs and a truly global audience."

READ MORE: This is why argan oil has become the most expensive 'It' beauty ingredient in the world

Anyway, after my 2-day excursion to the Cape winelands for an A-Beauty retreat hosted by SKOON., I did some of my own reading to further supplement my understanding of what Ancestral Beauty is and to share a few examples of it with you.

These are the few examples that stood out to me:

A research paper by researchers Idowu Jonas Sagbo and Wilfred Otang Mbeng reveals that “in South Africa, most people prefer herbal products for their personal care to improve their beauty as these products supply the body with nutrients as they are devoid of synthetic chemicals and reported to have relatively fewer side effects."

The research also states that in the Eastern Cape Province (where I grew up), herbal cosmetic products are more frequently bought from herbal shops, but in a few cases, they are still prepared at home, especially those used for skincare.

"Despite enormous advertising campaigns for new and improved cosmetic products, Xhosa men and women still prefer to use certain traditional vegetable and mineral cosmetics (imbhola yesiXhosa) for beauty, health, well-being, and as social status indicators in the Eastern Cape today," the paper states.

As for imbhola yesiXhosa that I mentioned, this study highlights its roots as those that stem from the C. flanaganii (Rhizophoraceae) tree - a small uncommon tree found in the forest between King William's Town  (Eastern Cape) and Southern Kwazulu-Natal. It is commonly called Cape Onionwood  (English), Kaapse Uiehout  (Afrikaans), and Umemezi (Xhosa).

They explain that in traditional medicine, the bark of C. flanaganii is mixed with a little water to make a light brown paste that is applied to the face to "improve the beauty of women, most especially young women". "The plant is also used to lighten and improve skin complexion, particularly by the people of Eastern Cape Province.[11] The methanol extract of C. flanaganii was reported to inhibit tyrosinase enzyme between the ranged of 29% and 74% with a higher total phenolic content of 49.45 mg/g. The extract also showed photo-protective effects with sun protection factor values above 15."

We then go to the Himba (OvaHimba) women of Namibia and their use of red ochre. 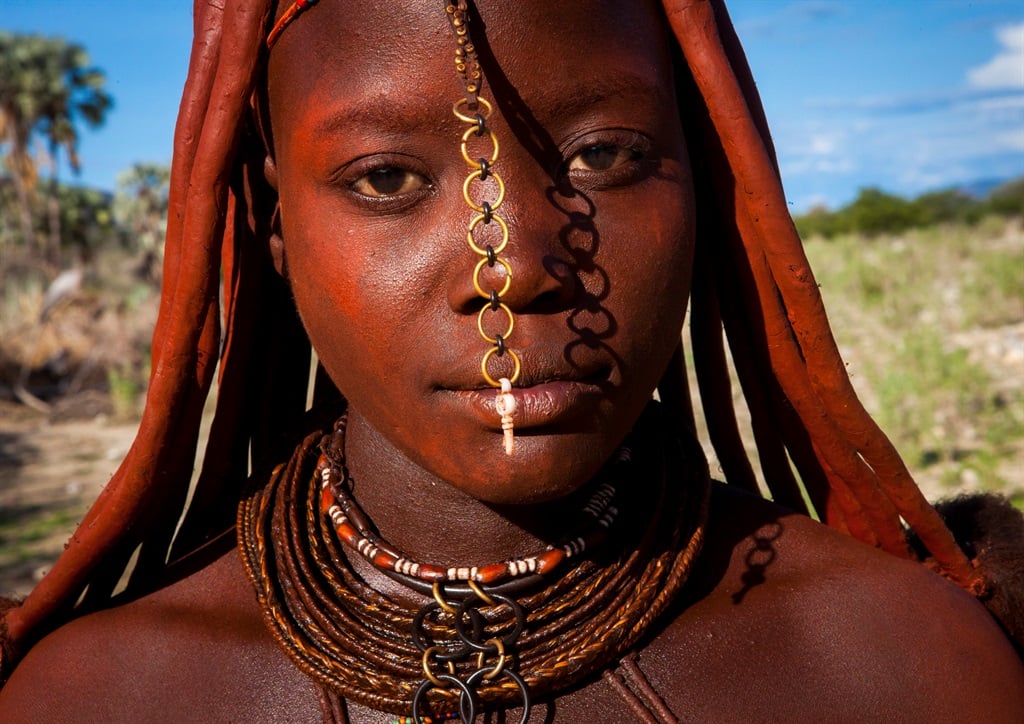 In a 2015 research article published in The Conversation - What the use of ochre tells us about the capabilities of our African ancestry - it's explained that in Africa, "ochre is used for protection from the sun and as a barrier from insects such as mosquitos. It has also been scientifically proven to inhibit the effects of UV radiation."

READ MORE: Hyperpigmentation still a leading skin concern among black women - but it can be treated

Any Buchu enthusiasts around?

I'll be the first to raise my hand here, as I also share what I read on The Culture Trip;

"Many Khoi and San people thought the herb [Buchu] to be a tonic for youth, but they also chewed it for stomach ailments, anti-inflammatory properties and mixed it with animal fat for various cosmetic applications."

The article then details the colonial growing pains that threatened to uproot it from its generous discoverers.

Here, we're told that "the Dutch colonisers didn’t only use Buchu while in South Africa – they took it back to their homeland where it was dubbed 'Noble’s Tea' owing to its high price tag. As a true show of its exclusivity, the cargo manifest for the Titanic showed that there were eight full bales of Buchu aboard the famous ship when it sank."

However, after reaching an agreement with the South African San Council and the National Khoisan Council, businessman Michael Stander "acknowledged that the Khoi and San’s medicinal plant knowledge predates any of those who subsequently arrived in the country." San Woman Smiling in Namibia on August 22, 2010 - The San are an ethnic group of South West Africa. They live in the Kalahari Desert across the borders of Botswana, Namibia, Angola and South Africa. (Photo by Eric LAFFORGUE/Gamma-Rapho via Getty Images)

Today, local beauty brands such as SKOON. and Suki Suki Naturals, ethically align themselves with the A-Beauty genre of cosmetics for their use of raw ingredients and African-harvested ancestral beauty game-changers, including the Buchu plant (indeed) which is available in various forms, from skin creams to teas.

In a 2019 interview with Suki Suki founder, Linda Gieskes-Mwamba, who is originally from the Democratic Republic of Congo, we observed that success of Suki Suki Naturals can be attributed to the fact that it's a "modern African brand combining underused traditional ingredients with scientifically-researched formulas," as the founder also explained.

READ MORE: How the founder of a local natural beauty brand created the solution to South African women's hair and skin needs

On making a positive contribution to sustainability, Linda expressed the following;

"We mainly source our products on the African continent, which means that our ingredients don’t have to travel far in order to reach us - thus reducing our carbon footprint. By predominantly sourcing under-used natural ingredients on the continent, we are helping the economy of our continent and increasing knowledge and visibility of the raw materials that we have to offer the world. By maintaining a production of our products in South Africa, we are contributing in creating jobs here."

The cruelty-free brand's founder also shared that they don't have a signature ingredient that they use in all their products, but rather they aim to use diverse and under-utilised raw materials.

"We do have various ingredients that are more present than others. We work a lot with Organic Argan Oil, Prickly Pear Oil, and Vegetable Squalane and Shea Butter," she revealed. This week, we got an official 101 from Thandi Mbulaheni, SKOON. CEO, on Ancestral Beauty and why this local brand has aligned themselves with this genre:

At its core, what exactly does A-Beauty entail?

A-beauty stands for everything we love about Africa – vibrant, innovative formulas that are a joyful celebration of Africa’s ‘communities and flora’. These include local, indigenous botanicals unique to South Africa and other African countries, used for millennia by local tribes. In what ways does it appeal to the ethical/values-based consumer?

The appeal comes from consumers appreciating that Africa’s flora has been used and upscaled before the craze of clean beauty. It’s the pride that their heritage and stories are packed with history, beauty, and innovation.

What are the key ingredients that characterise A-Beauty? Finally, can you unpack the concept of Ancestral beauty and how it speaks to African skincare in general?

We think of ancestral beauty as the longest run “consumer test” by the people of Africa, giving us tried and tested beauty ingredients and skincare routines that really work for our skin. In a way, we are looking back for fresh inspiration! We live in a world where facts and fiction get blurred
In times of uncertainty you need journalism you can trust. For only R75 per month, you have access to a world of in-depth analyses, investigative journalism, top opinions and a range of features. Journalism strengthens democracy. Invest in the future today.
Subscribe to News24
Next on W24
Ingestible beauty is the guilt-free, grocery-saving way of eating your face off to good skin