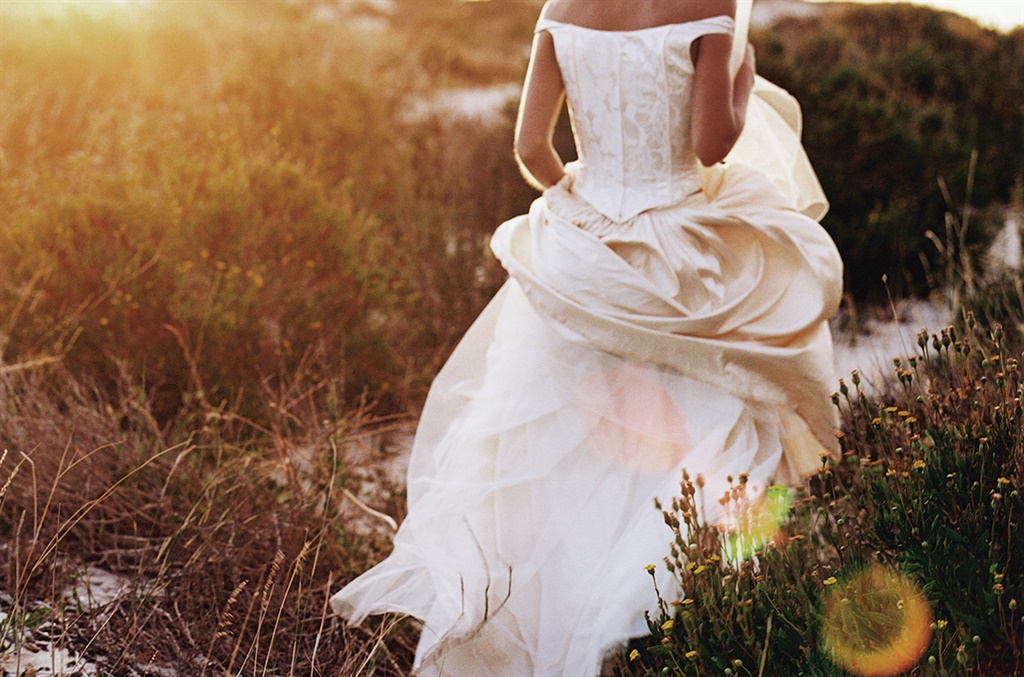 For most brides in the U.S, [and South Africa] that dream is realised in a beautiful white wedding gown. It’s a seemingly timeless tradition that is often the center point of little girls’ wedding fantasies. In 2018, about 83 percent of brides wore white dresses on their big day, according to a survey by Brides Magazine. Such an overwhelming statistic begs the question: Why do we associate white with wedding gowns? And how long has this tradition existed?

Godey’s Magazine and Lady’s Book, a leading 19th century women’s publication, addressed this in an article on the “Etiquette of Trousseau” in their August 1849 issue. “Custom, from time immemorial, has decided on white as [a wedding gown’s] proper hue, emblematic of the freshness and purity of girlhood,” they wrote.

While this implies a long history of bridal white, it is not true. At the time, white had only been a popular wedding dress fashion for about nine years – strictly among the well-to-do.

So when and where did the white wedding dress originate? As a curator at The Ohio State University’s Historic Costumes and Textiles Collection, I have often been asked this question, and my research included the search for an answer.

The practice likely traces back more than 2 000 years, with roots in the Roman Republic (509 B.C. - 27 B.C.) when brides wore a white tunic. The color white represented purity, symbolising both a woman’s chastity and her transition to a married Roman matron. It was also associated with Vesta, the virgin goddess of hearth, home and family who was served by temple priestesses garbed in distinctive white clothing.

After the fall of the Roman Empire, white marriage attire fell out of fashion. From the Middle Ages to the mid-19th century, most brides simply wore their best dress or purchased a new gown that could be worn again. White was simply not a practical choice in a world without running water – or where laundry was hand-washed.

A royal wedding sparked the modern trend in white bridal wear. Queen Victoria chose to forgo the royal tradition of wearing coronation robes when she married Prince Albert on 10 February 1840. Instead, she wore a fashionable white gown that was featured in newspapers and magazines around the world.

The style and color of her gown was copied across continents as women aspired to look like the young, attractive queen – much like the public emulates celebrities today. Wearing a white wedding dress became a sign of wealth and status rather than virginity. Only wealthy brides could wear a white silk gown, since they were wed in clean, elegant places that were removed from the muck and grime of life during the mid-19th century Industrial Age.

These gowns were actually cream or ivory, which was more flattering to the complexion. The brilliant white wedding dress would not become popular in Europe and North America until the 1930s, and would not truly become rooted in the public consciousness until World War II.

With U.S. wartime rations of fabric and a surge of weddings as American soldiers returned from the front, the war sparked changes in the design of wedding dresses. In 1943, while the war was still raging, the federal Limitation Order 85 dictated that only one and three-quarters yards of fabric could be used to create a dress.

The American Association of Bridal Manufacturers lobbied for an exemption, arguing that it was important to the overall morale of citizens. They asserted, after conducting a study of 2 000 brides that, “American boys are going off to war and what are they fighting for except the privilege of getting married in a traditional way? They’re fighting for our way of life, and this is part of our way of life.”

They were ultimately successful, and the limitation order exempted wedding gowns. But silk was difficult to find; the war with Japan had disrupted trade routes. Nylon was also in short supply, as it was being used in place of silk to manufacture parachutes. Most wedding gowns from those years were made from acetate – except for those worn in “parachute weddings.” Some soldiers, like B-29 pilot Major Claude Hensinger, kept the parachutes that saved their lives during the war and later gave the material to their betrothed to make a gown.

Although the first records of brides garbed in white reach far back into the annals of history, it only became standard fashion over last 80 years. With the arrival of ready-to-wear clothing, brides could order affordable, mass-produced gowns based on sample sizes that were then fitted for them: a custom-made gown at a ready-to-wear price. A large, traditional wedding with the bride outfitted in a princess-style white wedding gown became a symbol of the American dream.

From WWII through the end of the 20th century, the white gown symbolised prosperity, virginity and a lifetime commitment to one person. For most people today, those meanings are gone.

White is now the overwhelming choice for most U.S. brides, with 4 out of 5 choosing to walk down the aisle in a white gown, a sort of bridal uniform. It has become an iconic symbol of weddings, an expected part of the celebration, and despite knowing the relatively short history of the tradition of a white wedding, it was my choice as well.

Related Links
Everyone's fallen in love with this bride who walked down the (grocery) aisle in her full wedding...
The 10 most outstanding celebrity brides of 2019 all struck the perfect balance between ornate...
Woman blows up her wedding dress using R3 000 worth of explosives as she ends her 14-year...
Share
Next on W24
Valentino epitomises couture with digital showcase of all-white gowns we're drawing bridal inspo from