Oatmeal, a 10-month-old mongrel, journeyed with friend and dog trainer Ally Fuhs (27), who organised the elaborate road trip and bouquet delivery as a special wedding present to the couple.

Ally, who has been friends with bride Amber Elder (27) since school, runs a dog training business called Captivated Canine.

"At first, Amber and John had just asked me to stay with Oatmeal at their home in Michigan during their wedding, which I was more than happy to do," says Ally.

"However, after thinking about it and knowing how much Oatmeal means to both Amber and John, I decided to offer to road trip him to the wedding as a wedding present."

Ally says the couple was excited by the idea, so she made it a reality. 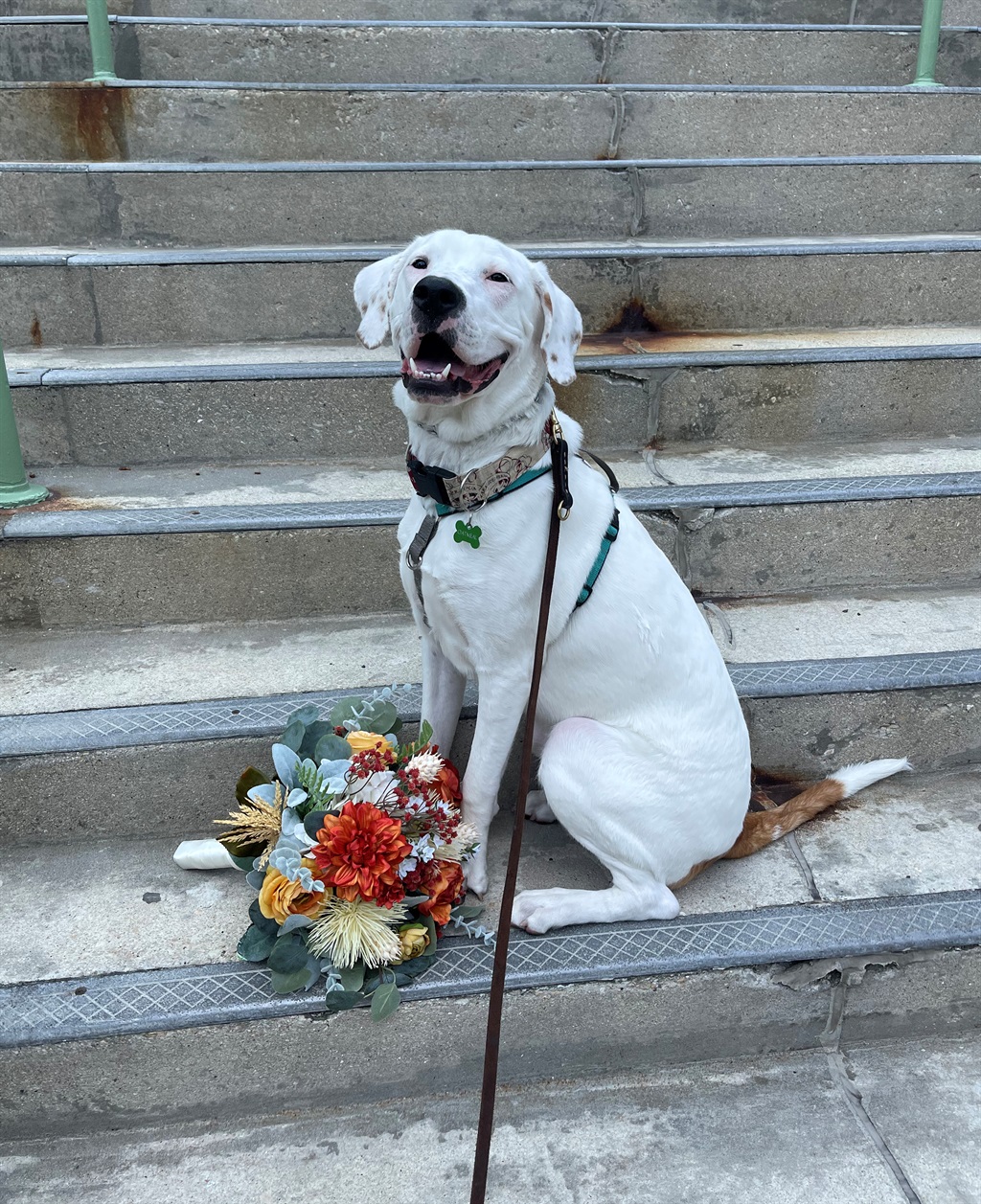 The pup, named Oatmeal, proudly wore a tux complete with bow tie for the wedding of his owners  his owners, Amber and John Elder. All photo courtesy @cupcake_teddybear_popcorn/ Caters News Agency/ Magazine Features

Amber had the flowers picked out with her florist friend before the wedding. She was initially planning on flying them, but Ally offered to bring them on the road trip.

"It took us four days and three nights to get there. We stopped for food, gas, and to stretch every two to four hours. Oatmeal was incredibly well behaved in the car. He especially loved driving through the small towns so he could stick his head out the window and take in all the smells," says Ally. Oatmeal proudly arrived, with the stunning orange, yellow and white bouquet, the day before the wedding. On the day of the wedding (17 September) wore a tux complete with bow tie.Amber was ecstatic when she saw Oatmeal. "I couldn't believe it was actually happening. I remember walking down the aisle and seeing Oatmeal sitting on the groomsman's side and thinking how lucky I was to have him there," says the happy bride.

"I know it's cheesy to say, but it was literally a dream come true." Groom John Elder (27) adds, "It's hard to top marrying the love of your life on a scenic lake in the mountains, but I have to admit that having your dog there in a tuxedo does make it even better. If I had the opportunity to do it again, I wouldn't change a moment." On the following day, Oatmeal and Ally set off on the journey back home - travelling around 3,440 miles (5 500 km) in total to make the special delivery.

We live in a world where facts and fiction get blurred
In times of uncertainty you need journalism you can trust. For only R75 per month, you have access to a world of in-depth analyses, investigative journalism, top opinions and a range of features. Journalism strengthens democracy. Invest in the future today.
Subscribe to News24
Next on W24
'I sued the bride for kicking me out of her bridal party after I cut my hair'

Subscribe to newsletters
Voting Booth
Have you ever purchased a fake luxury/designer item?
Please select an option Oops! Something went wrong, please try again later.
Yes, I believed it was authentic
7% - 364 votes
Yes, I didn't want to spend that much money on the original item
20% - 1054 votes
No, I always shop at reputable stores
13% - 696 votes
No, I don't wear designer clothing
60% - 3167 votes
Previous Results
Fashion
Our favourite celebs and influencers glam up to celebrate a champagne moment