Homeless couple gets surprise wedding after 24 years together Rosalyn and Rommel live in a small shack in an empty patch of wasteland, and for a living, the two collect discarded plastic to make ends meet and feed their family. The couple has been together for twenty-four years, and within these years, had six children. Rosalyn and her partner couldn't afford a wedding until a good Samaritan, Richard Strandz, an owner of a salon near where the couple lived, decided to organise a wedding for them.

Together he and a couple of friends contributed to organising a surprise wedding photoshoot of the couple on Valentine's Day.

READ MORE | Weddings can cost a small fortune, but is it worth it? Brides share their concerns about costs "I once dreamed of having a white wedding, but that was when I was a little girl. It went out of my mind a long ago. We never had enough money, and we concentrated on getting enough food to eat each day. Now I feel so blessed that it has happened. I'm so thankful," Rosalyn told Metro UK. 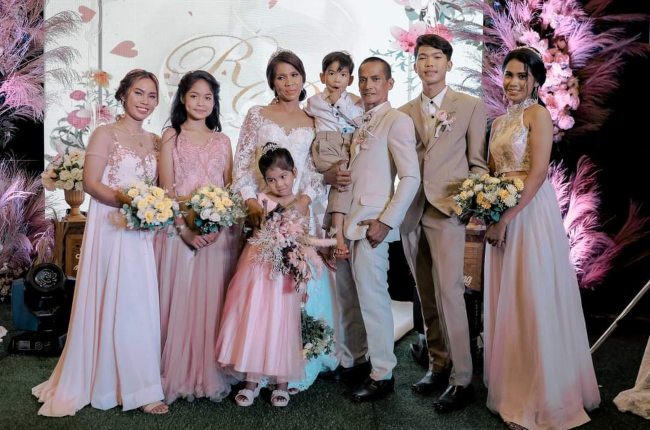 The organiser of this beautiful gesture who met the couple while collecting plastic says the couple's love story inspired him. "I was touched by their love story, so I contacted my friends who had wedding supplies business and thought of surprising them with a charity wedding," Richard says.

Leading up to the main wedding ceremony, the couple has already received a fairy tale photoshoot where the bride-to-be wore a white wedding gown and her partner a Barong Tagalog suit. Their wedding is to take place later in the year once marriage papers have obtained and Richard and his friends will take care of the finances of the official church wedding.

"True love is something that should be celebrated. It's very special, no matter whether you're rich or poor," Richard added.

Subscribe to newsletters
Voting Booth
After 365 days in lockdown, in what way has your life changed the most?
Please select an option Oops! Something went wrong, please try again later.
Nothing's changed. Everything in my life became stagnant.
23% - 83 votes
I've focused more on making my house/apartment a more comfortable, beautiful place to call home.
11% - 41 votes
I don't think I could ever not work from home again. Remote work has saved me so much money.
16% - 56 votes
I just appreciate the people in my life more and take nothing for granted.
37% - 134 votes
I've developed a healthier relationship with alcohol.
5% - 18 votes
I've had to reconsider my career options after retrenchment.
8% - 29 votes
Previous Results
Fashion
Pyjama sales have doubled since the pandemic started, Harvard Business School...