In the past seven months I have done dozens of articles on brides and bridezilla’s alike, and every time I think I've found the most extreme bride, a new one pops up.

Our most recent, though I’ve said this before, may just be the actual queen of bridezilla’s – that or she is just plain incapable of being rational.

According to Now to Love, this bride-to-be quit her job so that she could have more time to plan her wedding.While this may seem too over-the-top, it doesn’t even come close to her next unreasonable demand.

This bride then went on to insist that her partner take up a second job so that they can afford the lavish wedding she has been “dreaming about since she was a child”.According to the bride, it is an $80k wedding (R1, 115 million).

And when hubby refused to give in, this bride to be took to Reddit to ask other users how she can get her man to get that second job.

In what can be described as a mini-tantrum, the bride-to-be explains how she left her job to focus on wedding planning and now wants her fiancé to take up another job to help her afford the wedding of her dreams.

“Uhhh help, I need advice, my fiancé and I are having lots of issues right now”

“We can’t stop fighting and I don’t know what to do” she begins.

“I quit my job because wedding planning was taking up so much time and my fiancé refuses to take up a second job” she writes, seemingly without taking anything but her own needs into consideration. 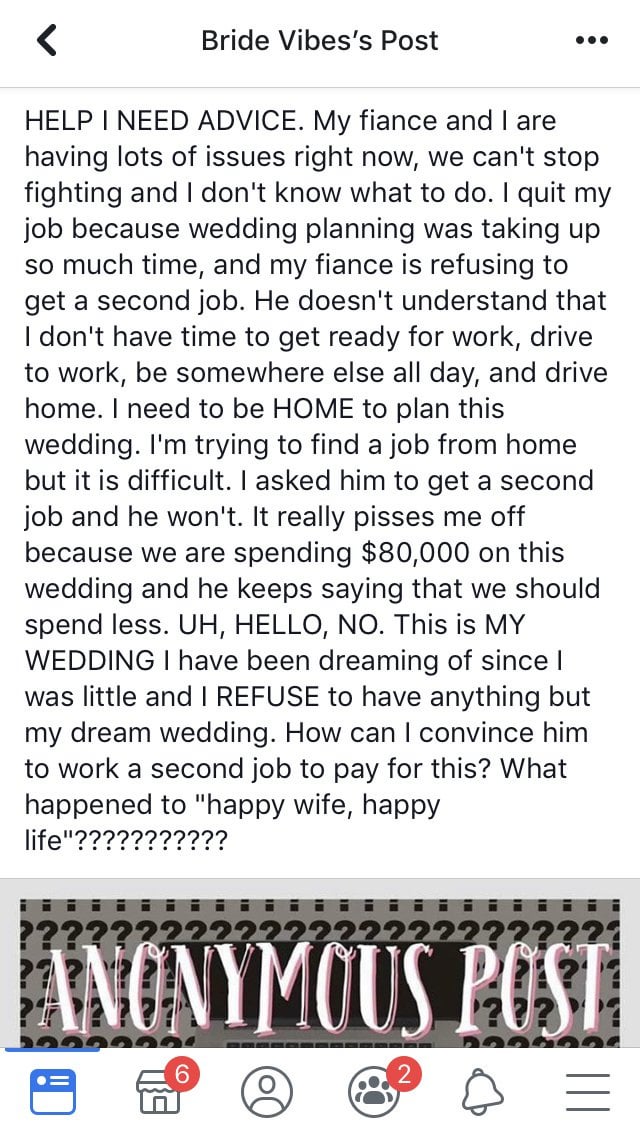 The bride-to-be, who even had the audacity to end of her “cry for help” with the question, “what happened to happy wife happy life” unfortunately for her however, did not get the advice she was asking for, which was, how she can get her fiancé to take up that job, did not get what she expected from Reddit users.

Instead, she was met with hundreds of people telling her where to get off and even advising her fiancé to run for the hills if he knew what was best for him.And to be honest I could not agree any more.Here are some of their comments.

This user wrote, “Well, that marriage won't last. Hope the guy gets out before they even marry by the looks of how self-centered the bride is.”

While this person commented on how big of a red-flag this bride-to-be’s behaviour is.

“This isn't just a red flag. This is a strobe light with a few fog horns attached to it.”

While the comments were both plentiful and hilarious, this brides demands are so hectic, it begs me to question her sanity.

Let’s just hope the couple came to a sensible agreement.

We live in a world where facts and fiction get blurred
In times of uncertainty you need journalism you can trust. For 14 free days, you can have access to a world of in-depth analyses, investigative journalism, top opinions and a range of features. Journalism strengthens democracy. Invest in the future today. Thereafter you will be billed R75 per month. You can cancel anytime and if you cancel within 14 days you won't be billed.
Subscribe to News24
Related Links
This bride fat-shamed her cousin who politely declined to be one of her bridesmaids
From making bridesmaids pay R2.8K more for their dresses to saving lives in veils, these 3 brides...
Bride-to-be devasted after bridesmaid sends wedding dress photo to groom
Next on W24
Woman files for divorce then tears and sets wedding dress on fire during 'wreck the dress' photoshoot