The Jenner sisters received major backlash again on social media this Wednesday following the release of their vintage-inspired limited edition t-shirts for their Kendall + Kylie collection.

Here is one of the controversial tees... Voletta Wallace (Notorious B.I.G’s mother) and Sharon Osbourne (Ozzy’s wife) expressed their disapproval of the collection with Voletta calling it “disrespectful” and “disgusting” in an Instagram post whilst Sharon tweeted, “Girls, you haven’t earned the right to put your face with musical icons. Stick to what you know…lip gloss.”

goodnight everybody!! i still don't know how this tweet blew up but it was a pleasant surprise to say the least :) https://t.co/T3PR4PFNA6

Kendall and Kylie getting dragged by Sharon Osborne is the best pic.twitter.com/RoextNKtcB

It’s not the first time the sisters have come under fire. Kendall received criticism following a Pepsi ad campaign she starred in earlier this year in which she and the company were accused of implying that a Pepsi could prevent police brutality. And recently, Kylie was accused of cultural appropriation after duplicating designs from a black owned clothing brand, Plugged NYC.

Read more: Kendall, Pepsi, and a can of worms

The t-shirts, which retailed at $125 (R1635) each on kendall-kylie.com, have since been removed from the sisters' clothing site and a public apology has been issued on both of their Twitter accounts. 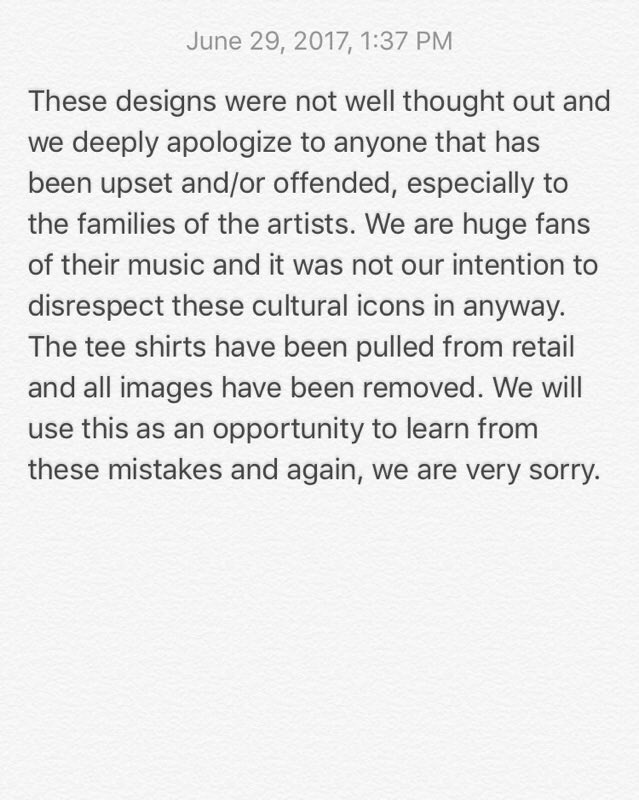 The reality TV sisters were issued with a cease and desist letter by B.I.G’s estate that has 'unwelcomed' the apology, according to a statement sent to and published by the Daily Mail U.K., which reads:

“While we appreciate that the Jenner’s have made an apology and pulled the unlawful and unauthorized items, this matter has yet to be resolved.”

Judging by this and the reaction received through social media, Kendall and Kylie can expect to be the centre of entertainment and fashion controversy for a while.

Let’s hope that Kendall and Kylie have learnt their lesson this time.

We live in a world where facts and fiction get blurred
In times of uncertainty you need journalism you can trust. For 14 free days, you can have access to a world of in-depth analyses, investigative journalism, top opinions and a range of features. Journalism strengthens democracy. Invest in the future today. Thereafter you will be billed R75 per month. You can cancel anytime and if you cancel within 14 days you won't be billed.
Subscribe to News24
Related Links
Kendall Jenner's dress just blew everyone's mind at Cannes
Kendall Jenner faces online hate after covering Vogue India
Kendall, Pepsi, and a can of worms
Next on W24
These BET Awards looks remind us why risqué will never be out of style