To take the research closer to home, it's revealed that Billie Eilish is South Africa's most popular celebrity style "icon", beating the likes of Harry Styles, Lady Gaga, and Kim Kardashian to the top spot.

The 'Bad Guy' singer is also the most popular fashion inspiration worldwide.

The number of online searches for hundreds of the world's most famous and stylish people's outfits were collated, to reveal which celebrity looks are Googled the most - and the oversized and loose-fitting ensembles of American singer Billie Eilish topped the list in 19 countries worldwide.

Every country's most searched for celebrity style inspo has been plotted on a map: The 'Ocean Eyes' breakthrough hit star embraces oversized and loose-fitting ensembles, reportedly so others can’t comment on her body shape, and people around the world are clearly loving it.

The 18-year-old star has made sporting matching baggy trouser-and-top and head-to-toe Gucci, Burberry or Louis Vuitton ensembles on the red carpet - often with a manicure to match - a part of her style DNA. Billie Eilish attends The BRIT Awards 2020 at The O2 Arena on February 18, 2020 in London, England. (Photo by Jim Dyson/Redferns)

The research, compiled by Money.co.uk, uses 12 months of Google search data to find out which celebrity we’re turning to the most for fashion inspiration. The number of online searches for hundreds of the world's most celebrated and well-styled faces alongside the word ‘outfit’ were collated, to reveal which celebrity looks are Googled the most.

Lady Gaga features on the list in third place. Fashion capital of the world, France, searches her outfits the most for their style inspiration – along with other countries such as Belgium and Colombia.

A fashion maverick since the day she became famous, Gaga’s iconic outfits have ranged from meat dresses to Audrey Hepburn-esque gowns. Although none take the top three spot, it’s interesting to see that three of the Kardashian/Jenner family make the top 10 global list. 23-year-old Kylie Jenner places highest in fourth place, with Zimbabwe, Belize and Laos all searching for her fashion looks the most.

Kim Kardashian is in sixth place, countries such as Bulgaria and Botswana search for her outfits the most, and Kendall places eighth with four countries Googling her style more than any other celeb.

'Truth Hurts' hitmaker, Lizzo, comes out top in the US. READ MORE: From her tiny bag to dressing up as a DNA test, here are the top 10 times Lizzo was awesome

Royal style still reigns it seems, a Meghan Markle and Kate Middleton both feature as top searches around the world.

Meghan Markle, who now lives in California with Prince Harry, has the most Googled style in Tunisia, Madagascar, and fashionable Monaco. The future Queen of England, Kate Middleton, is the top celebrity fashion search in Italy.

And since we're on the English subject, according to the data, the most fashionable man is British singer Harry Styles.

In both Europe and Asia, Billie Eilish tops the list, whereas in Africa, it’s Ariana Grande that is the most popular celebrity fashion persona. Lady Gaga is both North and South America’s most searched for source of fashion inspo, and in Oceania, it’s Harry Styles’ outfits that are being searched for the most.

READ MORE: Sunglasses, pixies and ponies - celebrity signature looks and why they wear them

As the top global fashion star of the moment, it's only fitting that we share a few of Billie Eilish's most memorable red carpet and performance ensembles: Billie Eilish performs live on stage at Billie Eilish "Where Do We Go?" World Tour Kick Off - Miami at American Airlines Arena on March 09, 2020 in Miami, Florida. (Photo by Kevin Mazur/Getty Images for Live Nation) Billie Eilish attends The BRIT Awards 2020 at The O2 Arena on February 18, 2020 in London, England. (Photo by Jim Dyson/Redferns) Billie Eilish arrives at the 92nd Annual Academy Awards at Hollywood and Highland on February 09, 2020 in Hollywood, California. (Photo by Kurt Krieger/Corbis via Getty Images) 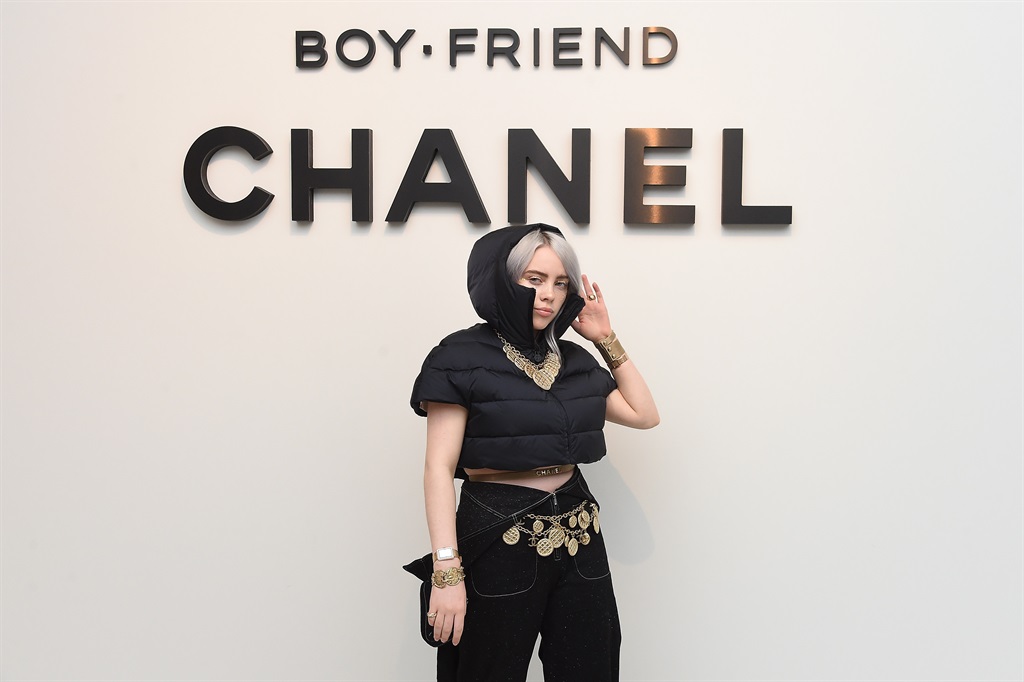 Singer Billie Eilish, wearing CHANEL, attends as CHANEL celebrates the launch of the Coco Club, a Boy-Friend Watch event at The Wing Soho on November 10, 2017 in New York City. (Photo by Nicholas Hunt/WireImage ) We live in a world where facts and fiction get blurred
In times of uncertainty you need journalism you can trust. For only R75 per month, you have access to a world of in-depth analyses, investigative journalism, top opinions and a range of features. Journalism strengthens democracy. Invest in the future today.
Subscribe to News24
Related Links
Billie Eilish slams body shamers after being criticised for tank top outfit
Billie Eilish says her personality changes depending on the clothes she's wearing
Sunglasses, pixies and ponies - celebrity signature looks and why they wear them
Next on W24
Vibrant hues and classic glamour - Cannes festival red carpet proves fashion is back with a vengeance