GALLERY | The Met Gala is back! A retrospective look at showstoppers to celebrate its return Zendaya attends the Rei Kawakubo/Comme des Garcons: Art Of The In-Between Costume Institute Gala at Metropolitan Museum of Art on 1 May 2017. (Photo by Mike Coppola/Getty Images for People.com)

The void created by the coronavirus pandemic continued in 2020 to grow bigger in the world of fashion, as fashion weeks have been rendered almost obsolete (perhaps just temporarily so).

Fast fashion had to reconsider its "fast" descriptor, high-end/luxury brands are still facing closure, there was no single 2020 LVMH Prize winner, and the biggest event on the fashion calendar - the Metropolitan Museum of Art’s Costume Institute's Met Gala - was cancelled.

The Metropolitan Museum of Art attributed the cancellation to the global health crisis. In April, the museum announced it will be holding two in-person galas after last year’s cancellation. The galas – an intimate one set for 13 September and a larger event set for 2 May 2022 will launch the two-part exhibition.

READ MORE | Despite a virtual ceremony, BAFTAs off-site red carpet looks were nothing short of allure and charm

The day has finally come, the gala set to take place this evening with Amanda Gorman, Naomi Osaka, Billie Eilish and Timothée Chalamet as co-hosts.

The first exhibition – set to open on 18 September will be called “In America: A Lexicon of Fashion” and will “explore a modern vocabulary of American fashion”.

The second portion; “In America: An anthology of Fashion” opens 5 May 2022 will explore fashion in collaboration with film directors. Both exhibitions will close on 5 September 2022. 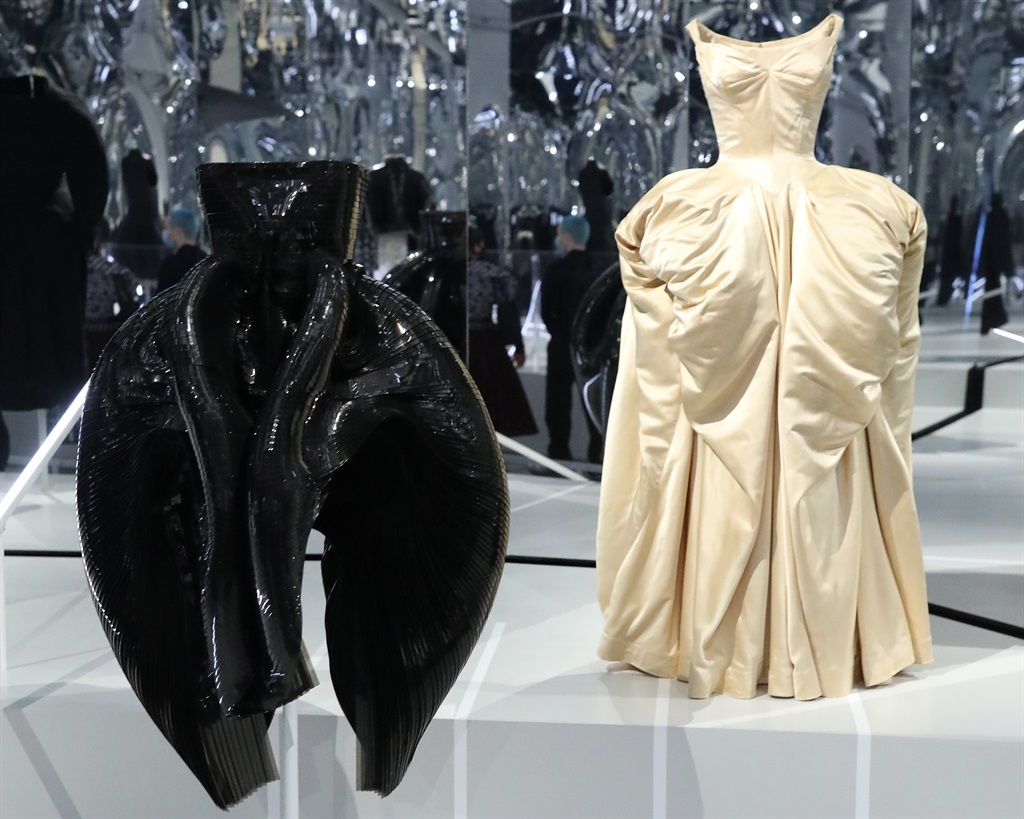 A 2012 Iris van Herpen dress and a 1951 Charles James ball gown are on display at the press preview for the Costume Institute's annual exhibition "About Time: Fashion and Duration sponsored by Louis Vuitton at Metropolitan Museum of Art on October 26, 2020 in New York City. (Photo by Taylor Hill/Getty Images)

In the same way the postponement shocked and dismayed many, the cancellation of the 'fashion Oscars' is big (and disappointing) news for designers, fashion media, and the A-listers who would've been the awe-inspiring vessels through which the former two parties (media and designers) fulfill their Met Gala red carpet roles. As the New York institution celebrated its 150th anniversary, the theme About Time: Fashion and Duration, was about “reimagining of fashion history that’s fragmented, discontinuous, and heterogeneous.” According to Vogue, the philosopher Henri Bergson, whose concept of la durée — time that flows, accumulates, and is indivisible — also provided some of the show’s framework. The co-chairs of 2020's would-be gala are Louis Vuitton creative director Nicolas Ghesquière, Lin-Manuel Miranda, Meryl Streep, Emma Stone, and Anna Wintour. No black co-chair - again, fit to the historically-charged theme.

Andrew Bolton, Wendy Yu Curator in Charge of The Costume Institute, who found inspiration in Orlando, the 1992 film based on the Virginia Woolf novel, says, "There’s no beginning, middle, or end. It’s one big fat middle. I always felt the same about fashion. Fashion is the present.”

This theme is therefore perhaps most apt for a year where time essentially stopped.

A W24 article titled "Fashion will have to redesign itself in order to survive beyond the Covid-19 pandemic", interrogated fashion's relationship with time, while also highlighting its role in major historical events. In it, it's mentioned that "by its very definition, fashion establishes a relationship with time, and being behind the clock would compromise its purpose (the inception of trends)," further posing the question; "As a time-dependent industry, how do you dictate relevance when the arms of your delicate timepiece suddenly stop?"

You don't. You adapt and admire the archive of shows, installations, exhibitions and Met galas past, we suppose.

Previous Met Gala themes have given us an array of couture moments that will go down in fashion history as some of the best interpretations of art, religion, culture, sub-cultures, traditions, designer retrospectives as well as futurism.

READ MORE | ICYMI - No red carpet, but the best SAG Awards looks were as theatrical as the stars wearing them

This is why E! Entertainment - the channel that once gave us Fashion Police with Joan Rivers' controversial musings on red carpet fashion - aired a Met Gala special on the week it would've taken place in 2020... for viewers to reminisce. Also ensuring that our annual feelings of excitement around the Met Gala remained high, was the High Fashion Twitter account (Hf Twitter community) that hosted their own Met Gala on the social media app in the spirit of creating “an online space where fantasy reigns supreme and impracticality does not exist.”

This online community called upon all “fashion enthusiasts from around the world to share and express their unique creative visions without real-world inhibitions.”

As it stands, there are 1991 pages of Met Gala red carpet images on Getty, and while we wish we could give you the best of every page, we've chosen to highlight some of the most recently referenced Met Gala red carpet history moments from the 2000s: 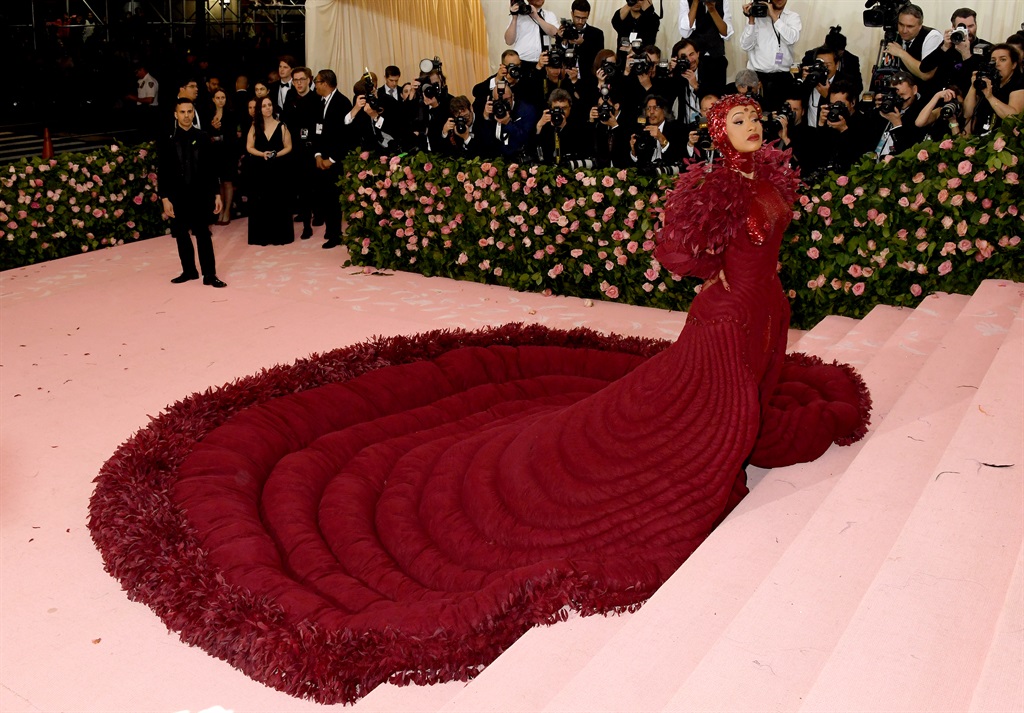 2015: This Guo Pei gown was perhaps one of the most epic and memorable gowns that has ever cascaded down those stairs. A general view of the 'Yellow Queen' dress exhibit during the preview of Guo Pei: Chinese Art and Couture exhibition at the Asian Civilisations Museum on June 11, 2019 in Singapore. The museum will hold 'Guo Pei: Chinese Art and Couture,' displaying 29 embroidered masterworks including Rhianna's 2015 Met Gala dress by Chinese couturiere Guo Pei, and 20 Chinese art masterpieces from the museum's collection. (Photo by Suhaimi Abdullah/Getty Images) 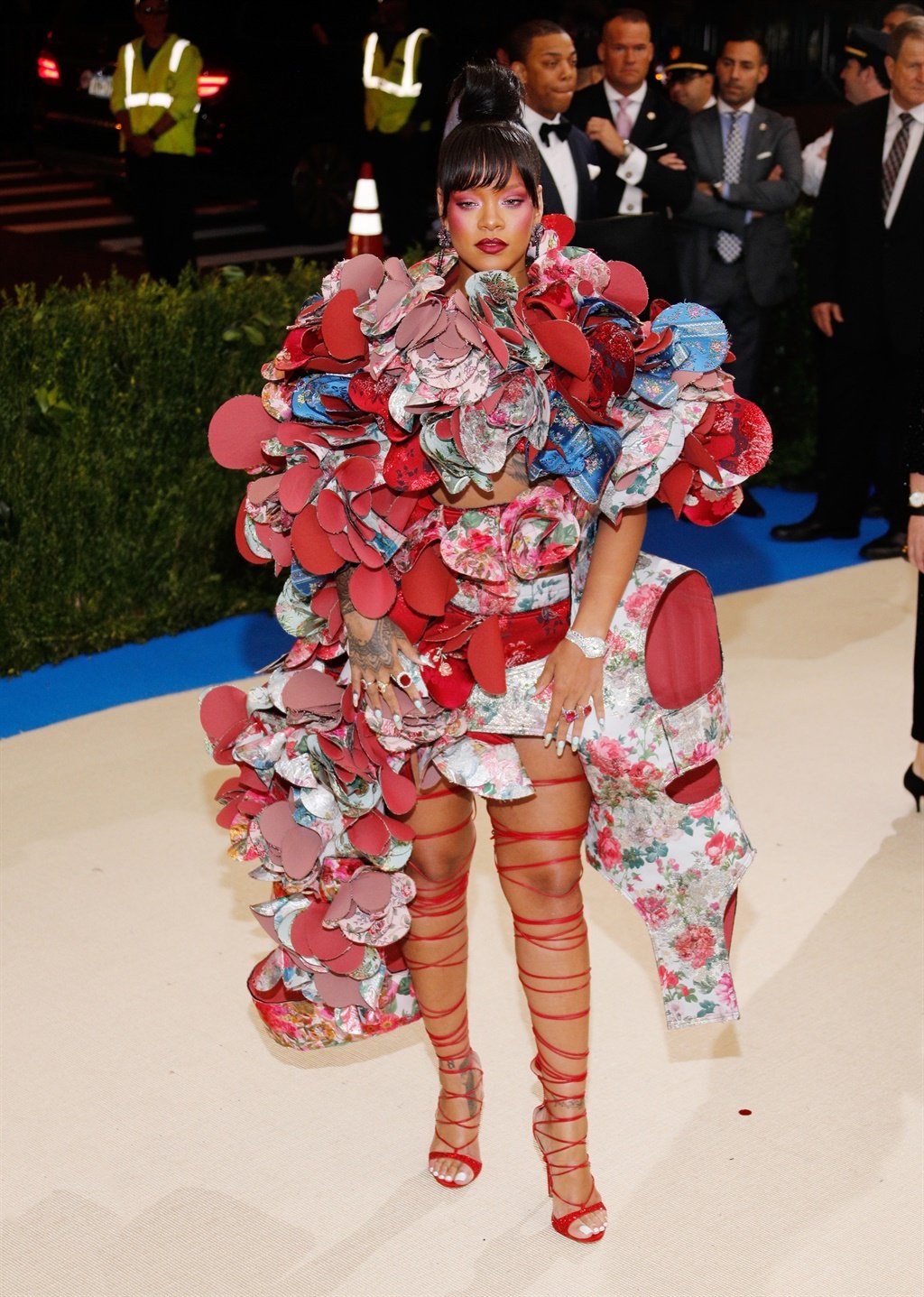 2018: “Heavenly Bodies: Fashion and the Catholic Imagination”, showing up as the Pope in an ensemble designed by Margiela, and the crowd said Amen! The 'Almeda' singer loves a 3D creation for the Met Gala.

2018: In Iris van Herpen and a durag with the words "My God wears a durag" for the 'Heavenly Bodies: Fashion and the Catholic Imagination' theme. 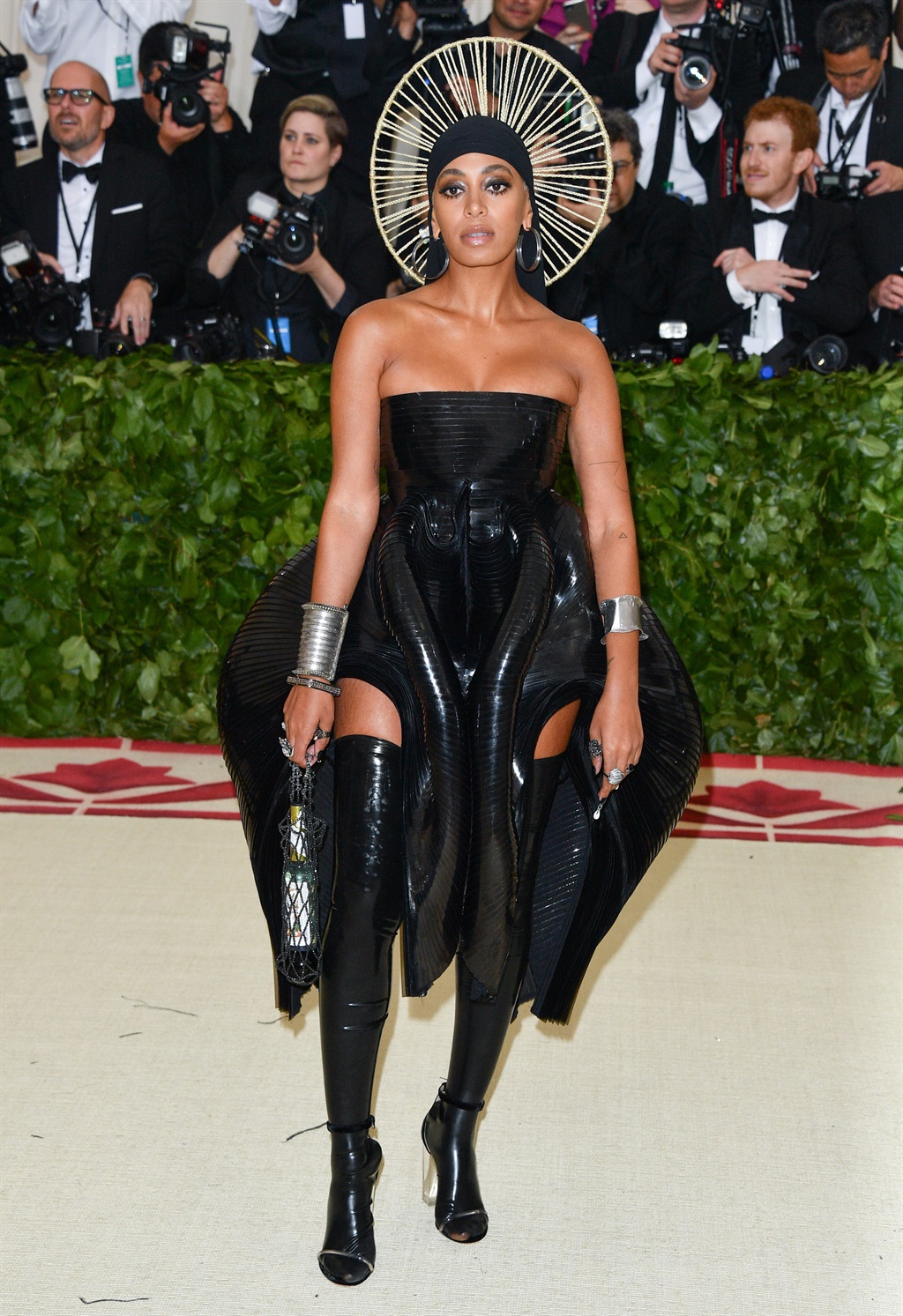 2016: In David Laport for the Manus x Machina: Fashion In An Age Of Technology theme. 2015: In a structural Giles dress for 'China: Through the Looking Glass.' 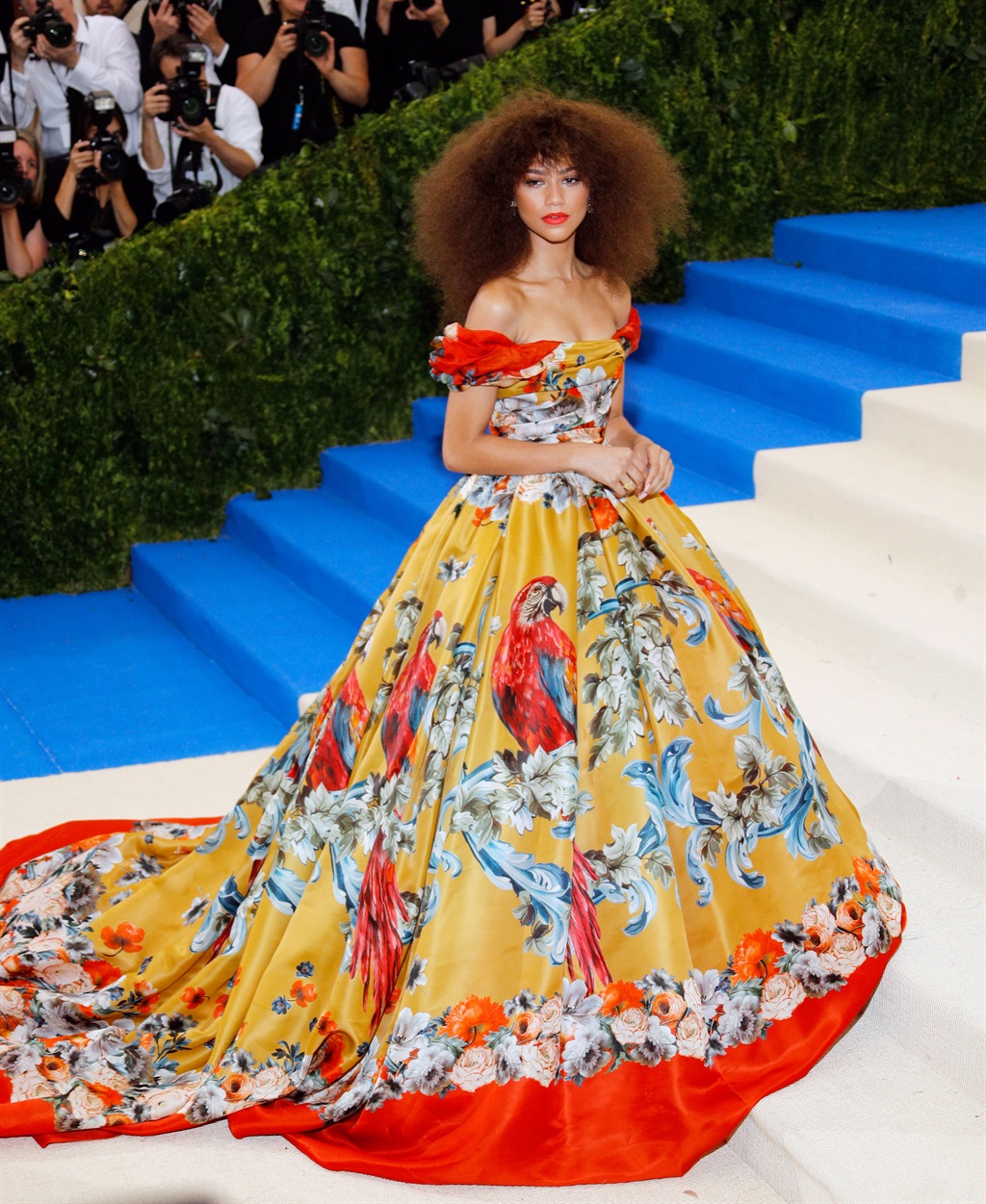 Zendaya at 'Rei Kawakubo/Comme des Garçons:Art of the In-Between' Costume Institute Gala at Metropolitan Museum of Art on May 1, 2017 in New York City. (Photo by Jackson Lee/FilmMagic) Also for the Camp theme, giving us a complete Brandon Maxwell experience in four pictures. 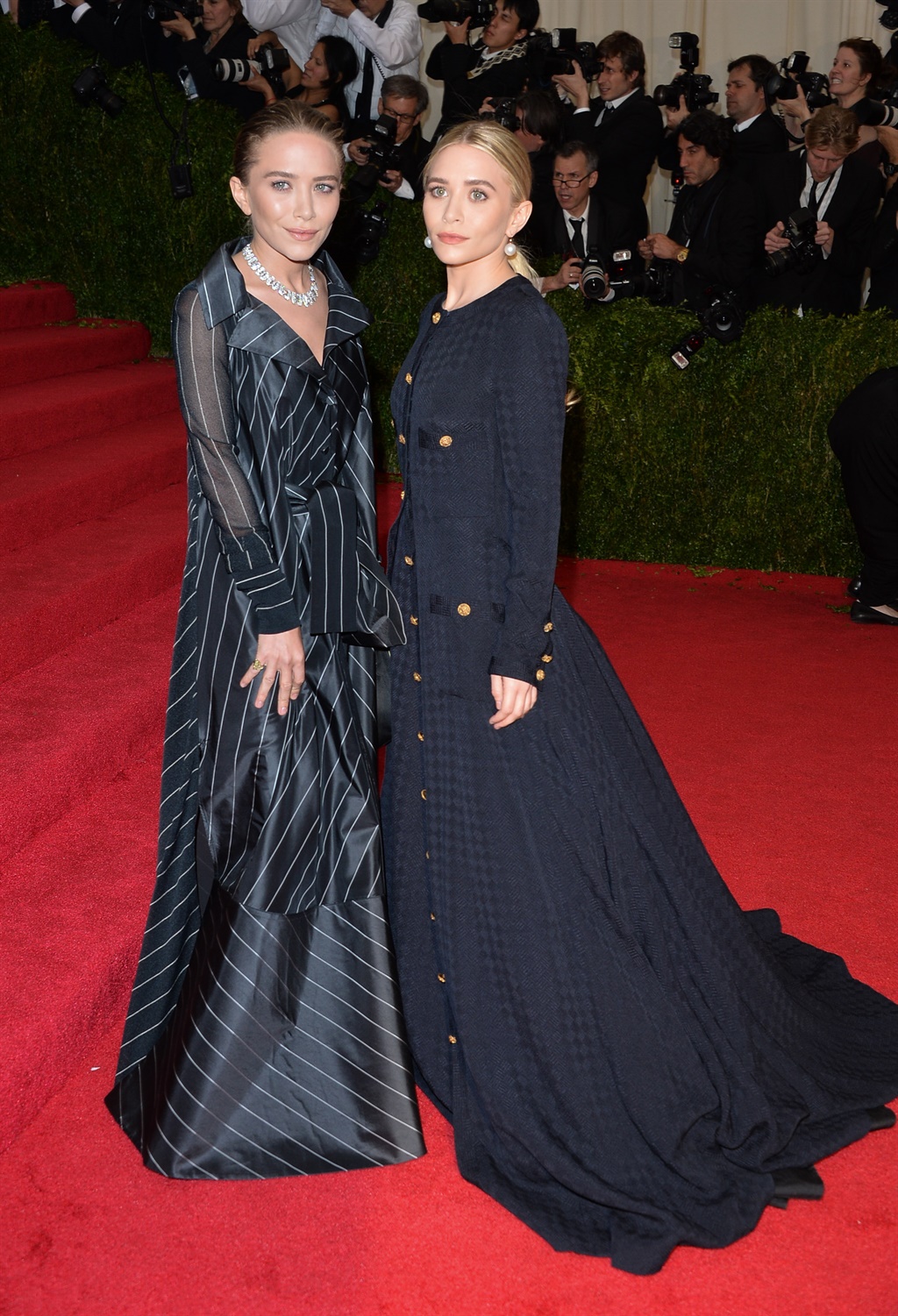 Ashley Olsen in Dior for "PUNK: Chaos to Couture" exhibition, 2013. With Andre Leon Talley for the 'Anglomania' exhibition at the Metropolitan Museum of Art May 1, 2006. In Phillip Treacy and Giles Deacon for the 2013 "PUNK: Chaos to Couture" exhibition. 2013: "PUNK: Chaos to Couture" in Givenchy by Riccardo Tisci. 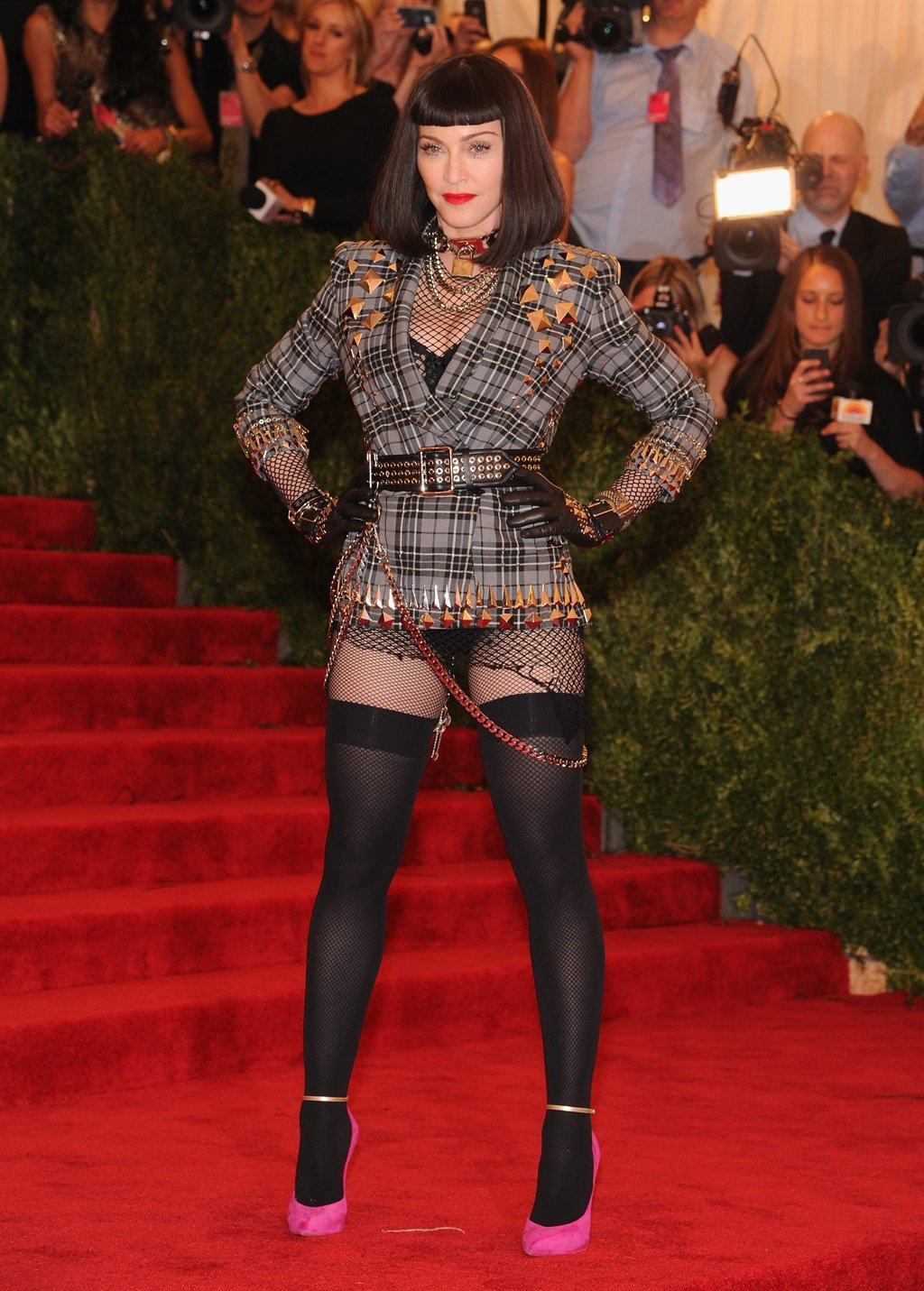 Additional information provided by Total Exposure on behalf of E!

We live in a world where facts and fiction get blurred
In times of uncertainty you need journalism you can trust. For 14 free days, you can have access to a world of in-depth analyses, investigative journalism, top opinions and a range of features. Journalism strengthens democracy. Invest in the future today. Thereafter you will be billed R75 per month. You can cancel anytime and if you cancel within 14 days you won't be billed.
Subscribe to News24
Related Links
How camp was the Met Gala? Not very
12 best hair and makeup transformations from the Met Gala 2019 red carpet
Feathers, frills and fairy tale gowns - all the extravagant looks we loved from the Met Gala 2019...
Next on Life
These BET Awards looks remind us why risqué will never be out of style