American poet Amanda Gorman reads a poem during the the 59th inaugural ceremony in a Prada coat and headband. (Photo by Patrick Semansky-Pool/Getty Images)

What's in a coat?

That which we wear for warmth by any other design would still look as snug.

Evidently, not at a presidential inauguration graced by some of the most powerful and morally ambiguous people in the world.

Bold, immaculate coordinated coat ensembles secured a spot as the sartorial hallmark of the Biden-Harris inauguration, as attendees power strutted through the US Capitol in monochrome attire.

No doubt, the internet was intrigued by the modest fashion spectacle - modest in appearance, but rich in fashion currency.

With social media abuzz with live coverage of the day, former FLOTUS Michelle Obama earned most of the day's praise for her burgundy Sergio Hudson look.

But did these pristine jewel-toned coats, Ella Emhoff's plaid Miu Miu A-line coat, and Dr. Jill Biden's custom Markarian ensemble fan our whiskers out because we've been sartorially starved for so long or because there really is something worth writing home about? Doug Emhoff, U.S. Vice President Kamala Harris, Jill Biden and President Joe Biden wave as they arrive on the East Front of the U.S. Capitol for the inauguration on January 20, 2021 in Washington, DC. During today's inauguration ceremony Joe Biden becomes the 46th president of the United States. (Photo by Joe Raedle/Getty Images)

The likes of regular celebrity red carpet walkers, Lady Gaga (but also, wow!) and Jennifer Lopez aside, the prominent figures who made masked-and-gloved appearances at this historic event are all said to have made deliberate style statements in terms of both their designers and colours of choice.

READ MORE: Has the criticism of VP Kamala Harris' Vogue cover been a little too harsh?

As we see more political figures on the covers of fashion-centric magazines, it comes as no surprise that a major political event had the internet on its best front row behaviour.

Moreover, the semiotics of fashion and colour theory play a huge role in political power dressing (topic for another day).

And no, this isn't about U.S. politics. It's about fashion being back in politics. President Joe Biden and First Lady Dr. Jill Biden attend the presentation of gifts ceremony in the Capitol Rotunda after Biden's inauguration on the West Front of the U.S. Capitol on January 20, 2021 in Washington, DC. During today's inauguration ceremony Joe Biden becomes the 46th president of the United States. (Photo by Win McNamee/Getty Images)

The First couple were decked out in all-American labels - Dr. Jill Biden in a custom Markarian suit by emerging designer Alexandra O'Neill, and her husband in a navy Purple Label Ralph Lauren suit with the star-spangled banner pinned on the lapel.

Ralph Lauren's finery often makes presidential cameos, as we've seen on Melania Trump, Barack Obama, and George Bush. According to Harper's Bazaar, Biden's choice of Ralph Lauren was therefore "a symbolic statement that calls for a return to decorum and upholding the values of America."

Dr. Biden's blue outfit has amassed headlines for its sentiments of "Trust, Confidence, and Stability". As the new First Lady, it's clear that her decision was informed by the fact that any First Lady's inauguration look communicates a lot more than what her fashion taste may be. It sets a precedent for what her style DNA will be during their term, and although she may have been visible throughout election season, it establishes an official first judgement of her political fashion mores.

The devil was certainly in the detail here, as the hand-made ensemble features a velvet collar and cuffs, and is embellished with Swarovski pearls and crystals - scintillating with optimism.

Dressing a First Lady has been known to bolster an emerging designer's career. So as Michelle Obama did for Jason Wu, it looks like Dr. Biden will do for Alexandra O'Neill.

Refinery29 also predicts that the "new First Lady plans to use her position to uplift American fashion designers." U.S. Vice President Kamala Harris' purple outfit was another intentional move - a colour of the unity of blue and red.

Not only did she choose to step out for her first appearance as a history-making black woman in a symbolic hue of purple, but she also proudly donned a Christopher John Rogers coat and shift dress with a custom pearl necklace by Puerto Rican designer Wilfredo Rosado and black pumps by Sergio Hudson.

In 2020, black, queer designer Christopher John Rogers won the CFDA Award for 'American Emerging Designer of the Year', so this was a fitting time for VP Harris to wear the namesake label. On Instagram, the young designer wrote;

"Thank you, Madam Vice President. We are so honored and humbled to have played a small part in this historic moment."

Earlier this week, Kamala wore a camel toned coat by Pyer Moss - which is founded by black designer Kerby Jean-Raymond - to the Covid-19 victims memorial at the National Mall. Doug Emhoff and Vice President-elect Kamala Harris face the Reflecting Pool as they observe a moment of silence at a memorial for victims of the coronavirus (COVID-19) pandemic at the Lincoln Memorial on the eve of the presidential inauguration on January 19, 2021 in Washington, DC. There have been nearly 400,00 deaths in the U.S. since the first confirmed case of the virus in Seattle in January of 2020. (Photo by Michael M. Santiago/Getty Images) Former U.S. President Bill Clinton and his wife Hillary Clinton arrive for the inauguration of President-elect Joe Biden on the West Front of the U.S. Capitol on January 20, 2021 in Washington, DC. During the inauguration ceremony Biden becomes the 46th President of the United States. (Photo by Jonathan Ernst-Pool/Getty Images) Former U.S. President Barack Obama and Michelle Obama arrive for the inauguration of President-elect Joe Biden on the West Front of the U.S. Capitol on January 20, 2021 in Washington, DC. During today's inauguration ceremony Biden becomes the 46th President of the United States. (Photo by Jonathan Ernst-Pool/Getty Images)

Different shades of purple were also seen on former First Ladies Michelle Obama and Hillary Clinton. Several reports conjecture that this is "a colour of unity".

But even more significant about Michelle's showstopping look that had social media ablaze, was that it was also the brainchild of an emerging black designer, Sergio Hudson, and it was styled by her long-time stylist, Meredith Koop.

Although we've put Michelle's look in the "purple" category, Meredith set the record straight on Instagram, saying that she's calling this deep hue "wineberry plum for the moment."

"What it wasn’t was bi-partisan purple. That’s a cute story, but it wasn’t the intention," the stylist adds.

"She wore a sequined navy blue jumpsuit at the Essence Festival in 2019, and a bright violet silk belted jacket and matching pants during her Becoming memoir book tour."

Miuccia Prada for the youth

My personal favourites from the inauguration were coincidentally both thanks to Miuccia Prada's master hand. Cole Emhoff (L) and Ella Emhoff, the stepchildren of Vice President-Elect Kamala Harris arrive for the inauguration of U.S. President-elect Joe Biden on the West Front of the U.S. Capitol on January 20, 2021 in Washington, DC. During today's inauguration ceremony Joe Biden becomes the 46th president of the United States. (Photo by Win McNamee/Getty Images)

Poet Amanda Gorman and the VP's stepdaughter, Ella Emhoff, were dressed in Prada and Miu Miu, respectively. While many appreciated the all-American fashion patriotism that put Ralph Lauren, Sergio Hudson, Christopher Joh Rogers, and Alexandra O'Neill's Markarian in the day's spotlight, it was Italian mogul Miuccia Prada's Miu Miu and Prada looks that suddenly had our heads turning in another direction of fascination.

Sustainable fashion enthusiast, Parsons student and Kamala Harris' stepdaughter, Ella, won us over with her Miu Miu embellished plaid coat. Paper Magazine has been quick to reveal that the coat from Miuccia's youthful secondary line is currently available at the brand's two New York City stores, while a black version is currently available on Farfetch for $4 950 (about R73 300).

They also share that the 21-year-old "worked with styling duo Jill Lincoln and Jordan Johnson, whose clients include Jennifer Garner, Jennifer Lawrence, Kiernan Shipka, and Rachel Brosnahan, to pull the selected looks for the big day."

Prada then created a second memorable moment when 22-year-old poet laureate Amanda Gorman etched her name into history's wall of fame in a canary yellow coat that Paper reveals she "actually wore before for the brand's Spring 2021 show as a virtual guest."

READ MORE: We're embracing the return of a hair accessory we didn't think we'd see so soon after 2007

The statement regal red Alice band is also by Prada. In a Twitter post, Amanda shared that the ring on her right hand had a caged bird — a gift from Oprah for the occasion "to symbolise Maya Angelou, a previous inaugural poet."

Thank you! I would be nowhere without the women whose footsteps I dance in. While reciting my poem, I wore a ring with a caged bird—a gift from @Oprah for the occasion , to symbolize Maya Angelou, a previous inaugural poet. Here’s to the women who have climbed my hills before. https://t.co/5Tegd20sko

The stars studded and spangled

Grammy and Oscar Award-winning singer Lady Gaga who is - as a GQ write puts it - "... too aware of her own place in history and pop music..." would of course set out to curate an iconic moment to sing the national anthem (Star-Spangled Banner) at the Biden-Harris inauguration.

You would think the Schiaparelli Couture gown was enough to put us in awe (and it did indeed), but in true Gaga fashion, she had to up the theatre with a large gilded gold dove-and-olive-branch brooch (the symbolism is self-explanatory) - that matched her mic - attached to her navy cashmere jacket. 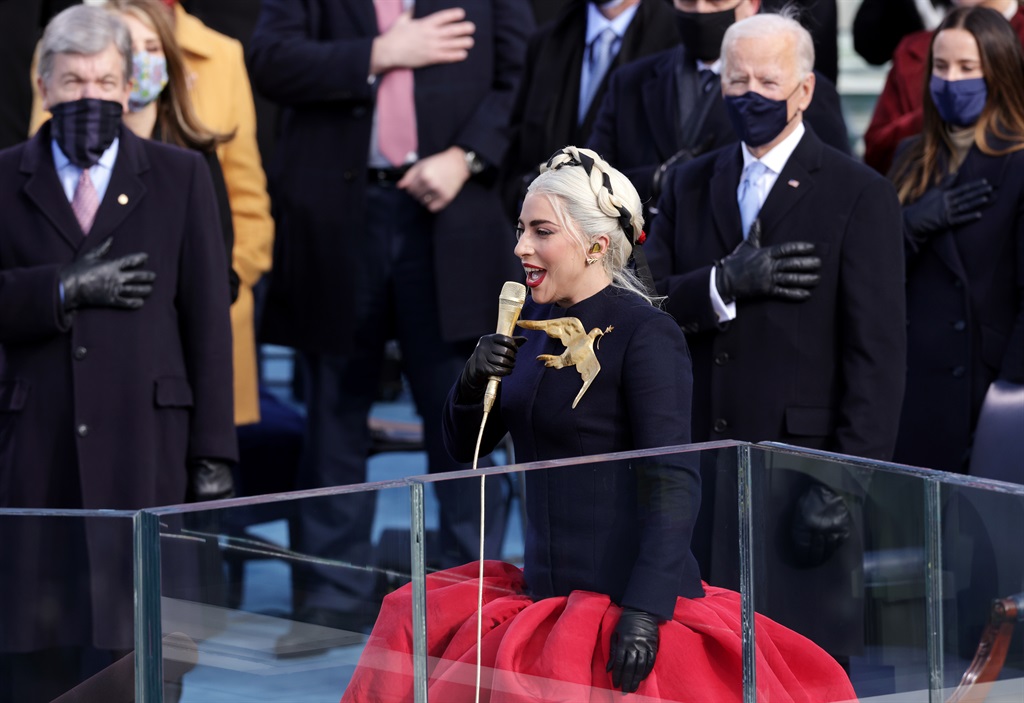 Lady Gaga sings the National Anthem at the inauguration of U.S. President-elect Joe Biden on the West Front of the U.S. Capitol on January 20, 2021 in Washington, DC. During today's inauguration ceremony Joe Biden becomes the 46th president of the United States. (Photo by Alex Wong/Getty Images)

Jennifer Lopez was decidedly less theatrical, albeit being in head-to-toe Chanel.

The singer's all-white getup speaks more to the confetti of monochrome coat outfits - head-to-toe brights and neutrals - seen on the Capitol steps yesterday. Singer Jennifer Lopez arrives for the inauguration of U.S. President-elect Joe Biden on the West Front of the U.S. Capitol on January 20, 2021 in Washington, DC. During today's inauguration ceremony Biden becomes the 46th President of the United States. (Photo by Jonathan Ernst-Pool/Getty Images)

From VP Kamala Harris to Michelle Obama to Dr. Jill Biden and the Biden granddaughters - monochromatic dressing is considered a powerful statement of celebration, particularly in the black U.S. community.

We can therefore assume that this was the message of collective optimism communicated at this political 'red carpet' affair. We live in a world where facts and fiction get blurred
In times of uncertainty you need journalism you can trust. For 14 free days, you can have access to a world of in-depth analyses, investigative journalism, top opinions and a range of features. Journalism strengthens democracy. Invest in the future today. Thereafter you will be billed R75 per month. You can cancel anytime and if you cancel within 14 days you won't be billed.
Subscribe to News24
Related Links
Has the criticism of VP Kamala Harris' Vogue cover been a little too harsh?
Statement silhouettes, shades of black, sneakers: The little we expect from fashion trends in 2021
How the red carpet became fashion’s calendar highlight - second to actual fashion events
Next on W24
These BET Awards looks remind us why risqué will never be out of style