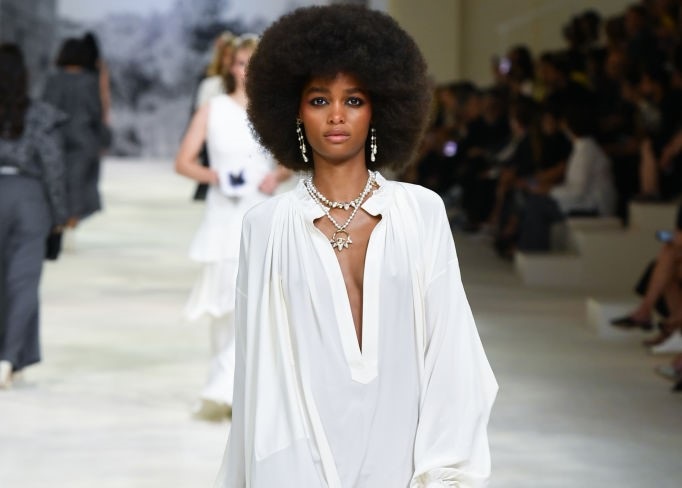 One of  the ways to say Chanel without really saying it, is monochrome. It was no surprise when the two-tone looks dominated the runway at Chanel's Cruise Fashion Show 2021/22 in United Arab Emirates.

The classic signature of the French design house modelled contrasts between the sixties, rock and punk in the collection was inspired by French poet and filmmaker, Jean Cocteau.

The collection, evoking the simplicity, precision, and poetry of Jean Cocteau's film 'Testament of Orpheus.'

READ MORE | Shades of blue, unique prints and elegance as designer pays homage to grandmothers on the runway

The collection, envisaged under the creative directorship of Virginie Viard, imbued the extreme modernity of black and white.

In an interview with Vogue, Virginie shared details of the collection. "Echoing the extreme modernity of Cocteau’s film, I wanted something quite rock,” she said. “Lots of fringes, in leather, beads and sequins, T-shirts bearing the face of the model Lola Nicon like a rock star, worn with tweed suits trimmed with wide braids, and pointed silver Mary-Janes. A look that recalls as much the modernity of the sixties as that of punk.”

Virginie started working at Chanel as an intern in 1987, and was Karl Lagerfeld’s closest collaborator for more than 30 years. They were so close that she followed him when he left Chanel for a five-year stint at Chloé during the 1990s. Therefore it was only natural that she took over the his position when he passed away in 2019. A model walks the runway in a monochrome puritan collar dress inspired by the sixties at the Chanel Cruise 2021/22 fashion show in Dubai, United Arab Emirates. Photo by Cedric Ribeiro/Getty Images

We live in a world where facts and fiction get blurred
In times of uncertainty you need journalism you can trust. For 14 free days, you can have access to a world of in-depth analyses, investigative journalism, top opinions and a range of features. Journalism strengthens democracy. Invest in the future today. Thereafter you will be billed R75 per month. You can cancel anytime and if you cancel within 14 days you won't be billed.
Subscribe to News24
Next on W24
Designer Paledi Segapo on the business of fashion, longevity and the art of collaboration

Get the newsletter
Voting Booth
Do you think it's important to get married in this day and age?
Please select an option Oops! Something went wrong, please try again later.
Yes, it's important in order to create a family unit and for companionship
22% - 666 votes
Not at all. Being single is far more liberating
9% - 276 votes
There is no general answer to this, it's each to their own
50% - 1524 votes
Yes, society still frowns on unmarried people, especially women
1% - 40 votes
It depends on whether you are able to find a compatible partner
18% - 549 votes
Previous Results
Fashion
Dior transports audience to seaside garden for its latest menswear collection...