Duchess in monochrome: We draw style inspo from Meghan Markle’s past looks Meghan Markle, Duchess of Sussex, recently celebrated her 40th birthday, the second since she and her husband, Prince Harry, stepped back from their royal duties.

However, despite her strained relationship with the royal family, Kate Middleton and Prince William, Prince Charles, and Queen Elizabeth wished Meghan a Happy 40th Birthday on social media.

The mom of two spent her milestone birthday privately with her husband and their children.

Wishing a happy 40th birthday to The Duchess of Sussex! ?? pic.twitter.com/qekFyLPmiD

— The Duke and Duchess of Cambridge (@KensingtonRoyal) August 4, 2021

READ MORE: On her 39th birthday, Meghan Markle is spending time with her husband and son at their LA home

Since her exit from royal duties, the Duchess has gone back to showbiz, moved back to the US, and gave birth to daughter Lilibet Diana Mountbatten Windsor, who is named after Queen Elizabeth II and her late grandmother Princess Diana.

The couple has been spending some time on family leave following Lilibet's birth.

Together with her husband, Meghan has also signed a production deal with Netflix to create documentaries and TV shows under their new production company. Meghan will be embarking on an animated children's series soon.

Meghan revealed that she gifted her husband a bench on his first Father's Day three years ago, inscribed with a poem that inspired the book.

In the book, there are several clear nods to Prince Harry and their son, Archie. For instance, there are watercolour illustrations of a father with ginger hair and the colours of the dog sitting next to the bench also closely resemble Meghan's beagle, Guy.

We've put together 17 of our favourite pics of the Duchess in monochrome outfits. 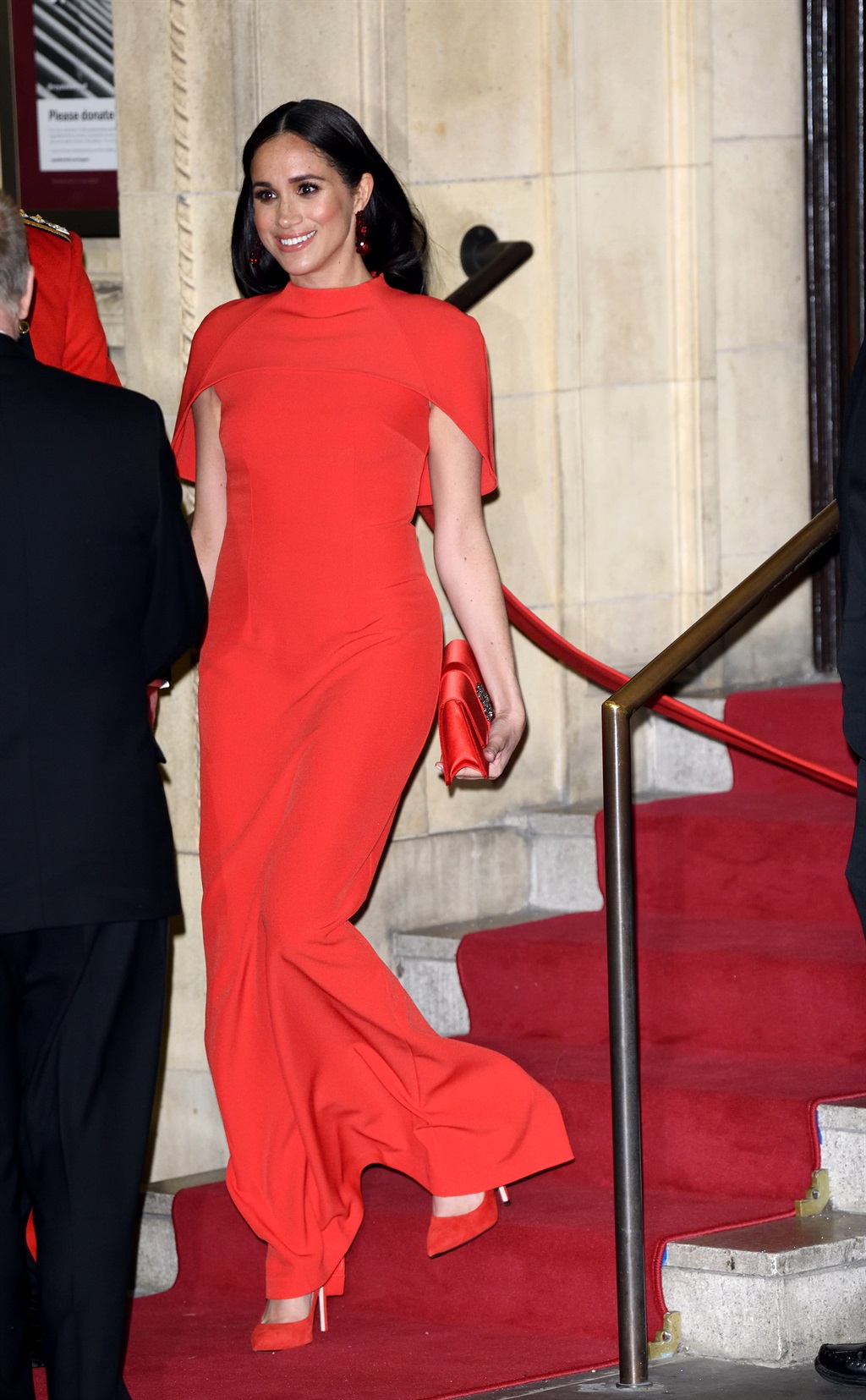 She arrives at Canada House on January 07, 2020 in London, England. (Photo by Samir Hussein/WireImage/Getty Images) Meghan attends a roundtable discussion on gender equality with The Queens Commonwealth Trust (QCT) and One Young World at Windsor Castle on October 25, 2019 in Windsor, England. (Photo by Jeremy Selwyn - WPA Pool/Getty Images) Meghan, Duchess of Sussex visits the British High Commissioner's residence to attend an afternoon reception to celebrate the UK and South Africa’s important business and investment relationship, looking ahead to the Africa Investment Summit the UK will host in 2020. This is part of the Duke and Duchess of Sussex's royal tour to South Africa on October 02, 2019. She later visited University of Johannesburg in a similar dress of a shorter length as seen below. (Photo by Samir Hussein/WireImage/ Getty Images) The Duchess of Sussex visits the African not-for-profit organisation 'mothers2mothers' during day three of the royal tour of South Africa on September 25, 2019 in Cape Town, South Africa. (Photo by Karwai Tang/WireImage/Getty Images) 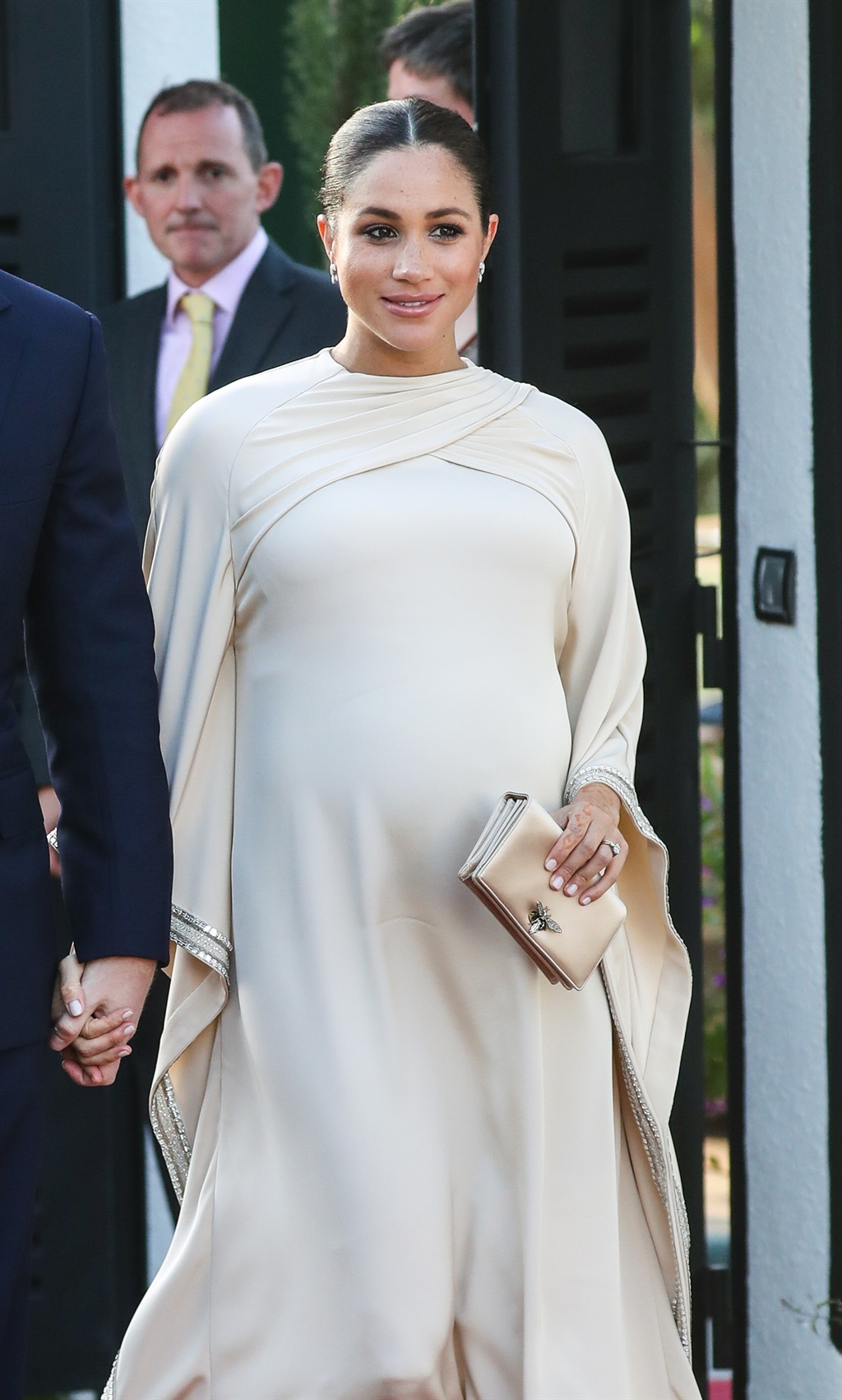 She attends a reception hosted by the British Ambassador to Morocco at the British Residence during the second day of her tour of Morocco on February 24, 2019 in Rabat, Morocco. (Photo by Pool/Samir Hussein/WireImage/Getty Images) Visiting The National Theatre on January 30, 2019 in London, England. It was announced earlier this month that The Duchess would become Patron of The National Theatre, one of two patronages passed on by Queen Elizabeth II. (Photo by Max Mumby/Indigo/Getty Images) Meghan takes part in a walkabout on October 31, 2018 in Rotorua, New Zealand. The Duke and Duchess of Sussex are on their official 16-day Autumn tour visiting cities in Australia, Fiji, Tonga and New Zealand. (Photo by Pool/Samir Hussein/WireImage/Getty Images) She visits the University of Chichester's Engineering and Technology Park on October 3, 2018 in Bognor Regis, England. The Duke and Duchess married on May 19th 2018 in Windsor and were conferred The Duke & Duchess of Sussex by The Queen. (Photo by Max Mumby/Indigo/Getty Images) Meghan arrives to open 'Oceania' at the Royal Academy of Arts on September 25, 2018 in London, England. 'Oceania' is the first-ever major survey of Oceanic art to be held in the United Kingdom. (Photo by Max Mumby/Indigo/Getty Images) Attending the Opening Ceremony of the Invictus Games Toronto 2017 at the Air Canada Arena on September 23, 2017 in Toronto, Canada. The Games use the power of sport to inspire recovery, support rehabilitation and generate a wider understanding and respect for the Armed Forces. (Photo by Karwai Tang/WireImage/Getty Images) Do you have a birthday wish for Meghan or want to comment on her style? Send us an email here.

We live in a world where facts and fiction get blurred
In times of uncertainty you need journalism you can trust. For only R75 per month, you have access to a world of in-depth analyses, investigative journalism, top opinions and a range of features. Journalism strengthens democracy. Invest in the future today.
Subscribe to News24
Next on W24
Trends are irrelevant, but why not treat yourself to an investment coat this payday weekend?

Subscribe to newsletters
Voting Booth
Have you ever purchased a fake luxury/designer item?
Please select an option Oops! Something went wrong, please try again later.
Yes, I believed it was authentic
7% - 228 votes
Yes, I didn't want to spend that much money on the original item
20% - 676 votes
No, I always shop at reputable stores
14% - 471 votes
No, I don't wear designer clothing
60% - 2024 votes
Previous Results
Fashion
Five intellectual fashion statements from history that anticipated today’s dark...