Meet Candy Smith, the woman who's determined to make Free State another one of South Africa's major fashion hubs 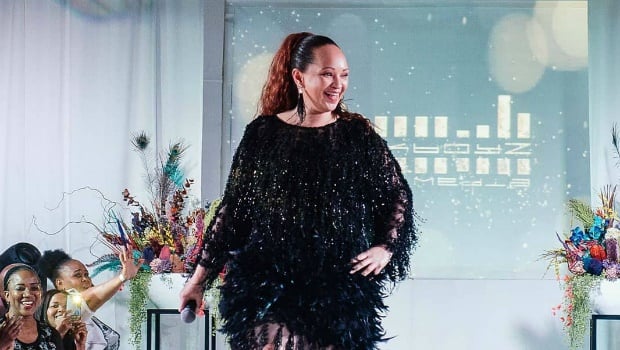 Candy walks the runway at the 2018 Free State Fashion Week

Think of the highly acclaimed photographer and creative director Trevor Stuurman who is Kimberley-born; international award-winning womenswear designer Thebe Magugu is also a product of Kimberley; Laduma Ngxokolo of MAXHOSA is originally from Port Elizabeth, while the new Miss South Africa Zozibini Tunzi, who'll soon be representing us on international runways, is from uTsolo - a small village in the Eastern Cape.

You might also remember a recent W24 article in which we introduced you to local models who had been booked for New York Fashion Week, including 17-year-old Caitlyn Rockman, who was the Face of Free State Fashion Week in 2017. In this article we also mentioned the now internationally recognised model, Ansolet Rossouw, who hails from Bloemfontein. Not to mention that the first baby to be successfully conceived via in-vitro fertilization (IVF) in Bloemfontein grew up to become Miss World in 2014 - Rolene Strauss.

It's therefore neither outlandish nor overly ambitious that in 2016, Candy established the Free State Fashion Week which offers a platform for emerging designers from overlooked small towns in the Free State province. The event has seen enormous growth since its inception, creating around 400 jobs (permanent and seasonal) in the past four years.

It's a budding success story for all who are involved in it, and as such, we're looking forward to the 4th installment which will take place at the Sun Windmill, Bloemfontein from the 19 – 21 September 2019.

READ MORE: Essential Spring/Summer trends every South African woman should have in her wardrobe, according to this international fashion authority

The woman who's making it all possible

Candy Smith is an award-winning businesswoman, having won the business woman award within the 2008 Mrs South Africa pageant, the 2011 emerging Business Woman from the Business Women Association for Free State and Lesotho, and she received an award from the Free State Heroins in the community Building Category in 2017.

In addition to these accolades, she’s the woman behind multiple platforms aimed at empowering young creatives in design arts. She's not only the founder and CEO of Free State Fashion Week - an annual prestigious fashion and lifestyle event - but she is also the Managing Director of the fashion design school Free State Fashion Hub, as well as the chairwoman of the Free State Fashion Council; a non-profit agency aimed at giving back to the community by providing mentorship programmes to the youth.

Father as I post this picture this morning you know my needs father. Protect me from all evil, let me not suffer pain and let me not cause pain to others. I declare no weapon formed against me shall prosper and as I walk through the valley of the shadow of death I shall fear no evil for you are with me. No plots and plans of the enemy shall come over me and I know you will open doors supernaturally as only you can. I do not fear cause God is with me and the plan of men/women who plots against the plans You have for me shall fail. I am blessed, I am healed, I am destined for greatness and I shall live life in abundance that God has promised me in John 10:10, the enemy comes to steal, kill and destroy but I have come to give you life and life in abundance.?? No weapon formed against me and my family shall prosper so stop trying???

Born and raised in Bronville, Welkom, the 41-year-old entrepreneur discovered her passion for fashion at a young age when she picked up a needle and thread to sew clothing for her dolls behind her parents’ back - a skill she later enhanced by designing for her church sisters, friends and family.

As an active teenager, she became a professional model under Elsie’s model management and won numerous titles, but it was in grade 11 when she discovered her entrepreneurial skills. A seamstress opportunity became available to supply the school with skirts, and she took full advantage of the opportunity and started sewing school skirts, employing two unemployed women in her community to assist with production during her school holidays.

After completing her matric, Candy enrolled to study fashion design at the National Academy of Fashion in Pretoria, and has since established her own fashion line called Candy’s Collection and Candy’s Bridal Paradise with boutiques in Bloemfontein.

We have no doubt that Free State Fashion Week will continue to attract fashion enthusiasts and industry authorities from all over the country.

We live in a world where facts and fiction get blurred
In times of uncertainty you need journalism you can trust. For only R75 per month, you have access to a world of in-depth analyses, investigative journalism, top opinions and a range of features. Journalism strengthens democracy. Invest in the future today.
Subscribe to News24
Related Links
See all the most memorable London Fashion Week shows in HD
GALLERY: 10 of Naomi Campbell's best-dressed guests at her 2019 Fashion for Relief Show
Time to make fast fashion a problem for its makers, not charities
Next on W24
Trends are irrelevant, but why not treat yourself to an investment coat this payday weekend?