We are used to Kanye the attention-seeker. The ego-maniac who infamously interrupted Taylor Swift during her VMA’s acceptance speech in 2009, and who announced he’s running for president in 2020 on the same stage in 2015.

His previous fashion collections (Yeezy Seasons 1-4) have been…interesting. I’m not a fan, mainly because I don’t, technically, consider most of his designs to be clothes.

They are earth-toned body stockings. At best.

Call it conforming, or a rush of common sense to the head, but his Autumn/Winter 2017 showing at New York Fashion Week was, actually, quite normal:

Known for using real people in his previous shows, he opted for real models this time around too.

We have become used to his neutral-toned, skin-tight, ripped, unwearable-in-public outfits. But no, the models were dressed in actual clothing one might be seen wearing to actual human gatherings – like dinners, to work, etc.

Of course Kim always managed to make whatever Yeezy-designed West put her in look good, but this time around he actually showed some respect and dressed her in an outfit that didn’t resemble the inside of an aubergine, but rather its purple skin.

She wore a head-to-toe aubergine look that gave us life... 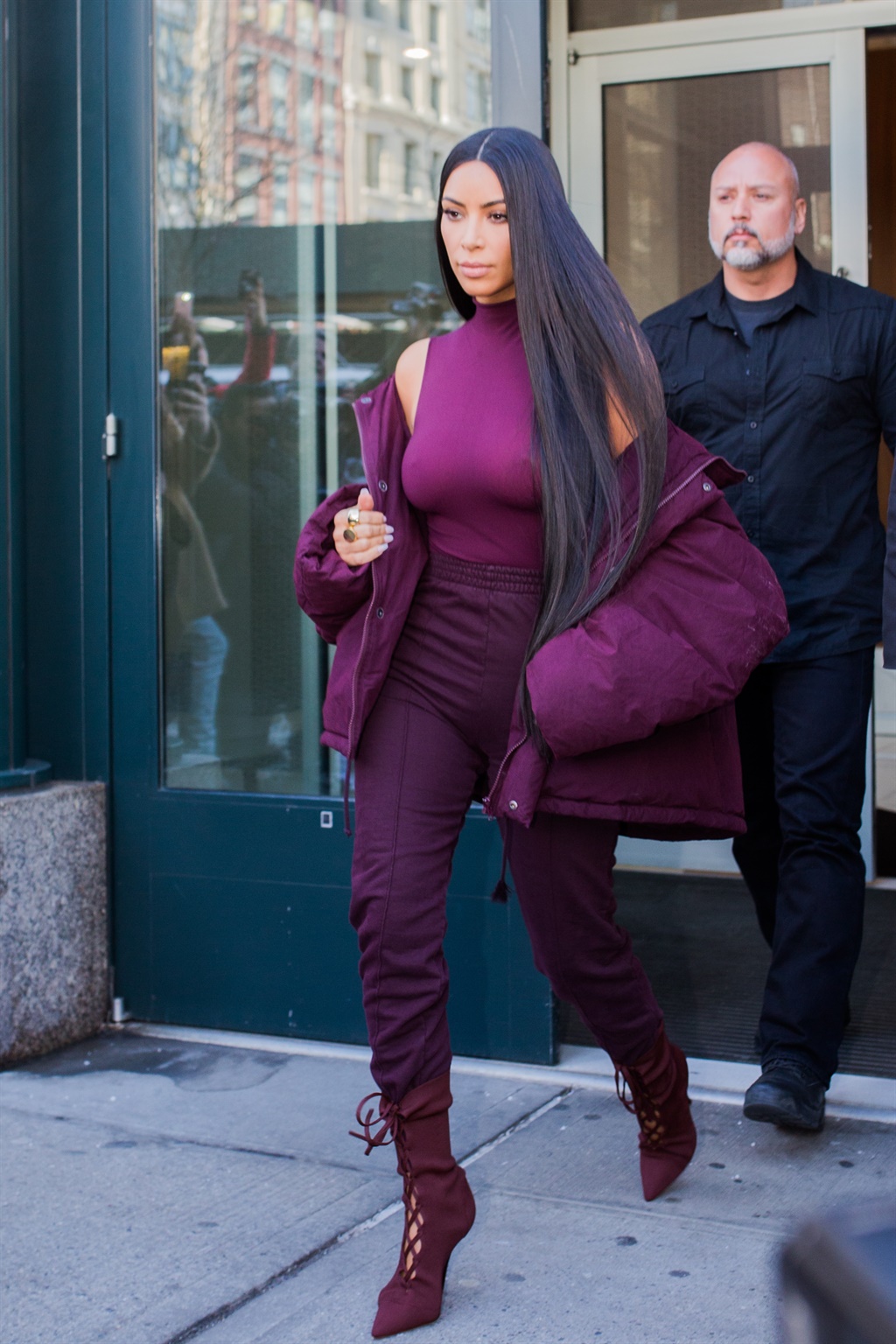 But, but, he’s married to the woman who single-handedly pioneered the selfie movement?!

ManRepeller.com notes that the rules of the show stated that social media was restricted, i.e. no phones and no posting on social were allowed. Yet editors still managed to find a way to clandestinely capture a few of the runway moments.

Had enough? Of course not. More IRL #yeezy 5 pic.twitter.com/OmeUVfnrtk

Yeezy Season 5. Words cannot describe how I'm feeling right in this very moment. Kanye, you may or may not read this, but when I was 7 years old moving from a small town in Australia to Miami I was scared, sad to leave my family, and all that I knew, you were the first artist I ever listened to, the first music video I ever saw, and the first artist to inspire me. You taught me about racism and that it exists, I began reading books on racism, defending kids in school that were picked on for having accents, defending myself for having my own culture. You've taught me and others that confidence is a beautiful thing, that your own art and creativity isn't about pleasing others but pleasing yourself. You are true artist and I couldn't be more thankful to be apart of your vision. I would not be in this very moment if it wasn't for the people that believe in me the most @jessemsimon you've changed my life, you were the first agent to ever believe in me and understand me at my lowest points I couldn't be more grateful to have not only an agent but a life long friend, to my amazing boyfriend @arisjerome for holding my hand the whole way through all of this, I never thought I'd be capable of accomplishing much until I met you, you are so special to me. And I huge thank you to anyone who has helped and wish me the best along the way. Excited for the future and what's to come. #yeezyseason5

The show was 6 minutes long But his most recent show was short and sweet - and rather intimate.

ManRepeller.com reports that the show was 6 minutes long, while Instyle says it took 15 minutes. Some tweeted saying 13 minutes. So let’s just agree to disagree (‘cause we weren’t there!) and say an average of 10 minutes?

Kanye didn’t even show his face

The finale was almost, if you can imagine, as strange as SONA would've been without a fist-fight. West never showed his face at the end of his show.

HIM, not stepping into the spotlight?

Instead he made Kim’s departure from her front row seat, to go backstage, the finale moment.

We live in a world where facts and fiction get blurred
In times of uncertainty you need journalism you can trust. For only R75 per month, you have access to a world of in-depth analyses, investigative journalism, top opinions and a range of features. Journalism strengthens democracy. Invest in the future today.
Subscribe to News24
Related Links
PICS: Kanye West's extravagant new Yeezy collection hits the runway
Super on trend hair and makeup looks to try this weekend
How Dior's Paris Fashion Week show temporarily created a world devoid of Trump
Next on W24
Questionable craftsmanship, branding placement and more telltale signs that a designer bag is fake