The first black, trans and disabled teen signed to one of the most famous model agencies in the world finally has her own cover Aaron Phillip on the cover of Isis Nicole Magazine

While the fashion industry still has a long way to go, it has been making some notable strides in creating a more inclusive and diverse fashion community.

Meet 17-year-old Aaron Philip  — a black, trans and disabled model from the Bronx, New York, who has recently signed with Elite NYC, a prominent agency that represents some of your favourite models in the industry (Cindy Crawford, Fei Fei Sun and Amilna Estevao).

Aaron Philip, who uses both they/them and she/her pronouns, is a disabled, gender-nonconforming femme model. She went viral on Twitter last year when she tweeted the following tweet:

honestly when i get scouted/discovered by a modeling agency it's OVER for y'all! by y'all i mean the WORLD! it's real inclusivity/diversity hours folks, get into it! pic.twitter.com/58VOSafAm6

Aaron's tweet was retweeted over 24 000 times and received over 90 000 likes and thousands of heart-warming positive responses. People were instantly drawn to Aaron's sense of style and the inspiring positivity that oozes from every one of her stunning photos.

Aaron, still cannot believe how from one tweet, her whole life has changed. “I wanted to be a star,” Aaron told Them. “I really wanted to get some headshots done so I could apply to agencies, but after sending them out, I wasn’t getting the feedback or response I wanted. So I decided to head to Twitter and said, ‘Twitter, do your magic. Do your thing.’ I had the intention of making that post, but I didn’t expect it to blow up the way it did…with that amount of attention and success.”

i’m signed to @elitenyc! thank you so much for supporting me thru my journey to make the fashion world more inclusive. this hasn’t been easy, but we did it! i’m so excited & grateful to work hard and share this new chapter of my life with you all ???? pic.twitter.com/X7d05rS379

Now Aaron has been featured on the cover of The Isis Nicole magazine. The team, consisting of founder Isis Nicole and creative director Hannah Black, has consistently been ahead of the curve. They’ve managed to speak with musicians, models, and artists who are in defining moments in their careers which now includes Aaron.

me by Sophie Hur for @the_inmag (the Isis Nicole Magazine)

The Isis Nicole Magazine shared that Phillip was one of two cover stars for their latest issue. The second cover features singer Ravyn Lenae.

Aaron is showing that diversity in the fashion industry is a good thing and she’s doing disabled, trans, black women proud.

She also recently wrote a brilliant essay for Them in which she details how much this accomplishment truly means to her. “I enter the fashion world with intentions of making the industry more diverse, inclusive, and accessible,” she said.

“I have never seen a physically disabled supermodel or a Black transfeminine model heralded, celebrated, or even working in the way other models are — and I hope to change that. This lack of representation and visibility in fashion has deeply affected me throughout my life, and has driven me to take matters into my own hands to carve a space and try to provide opportunity for members of my community in this field.”

Living with quadriplegic cerebral palsy, Aaron has spoken out about how proud she initially felt when she came across the 2015 Kylie Jenner cover of Interview magazine which featured Kylie in a golden wheelchair (sigh). The cover naturally sparked controversy. 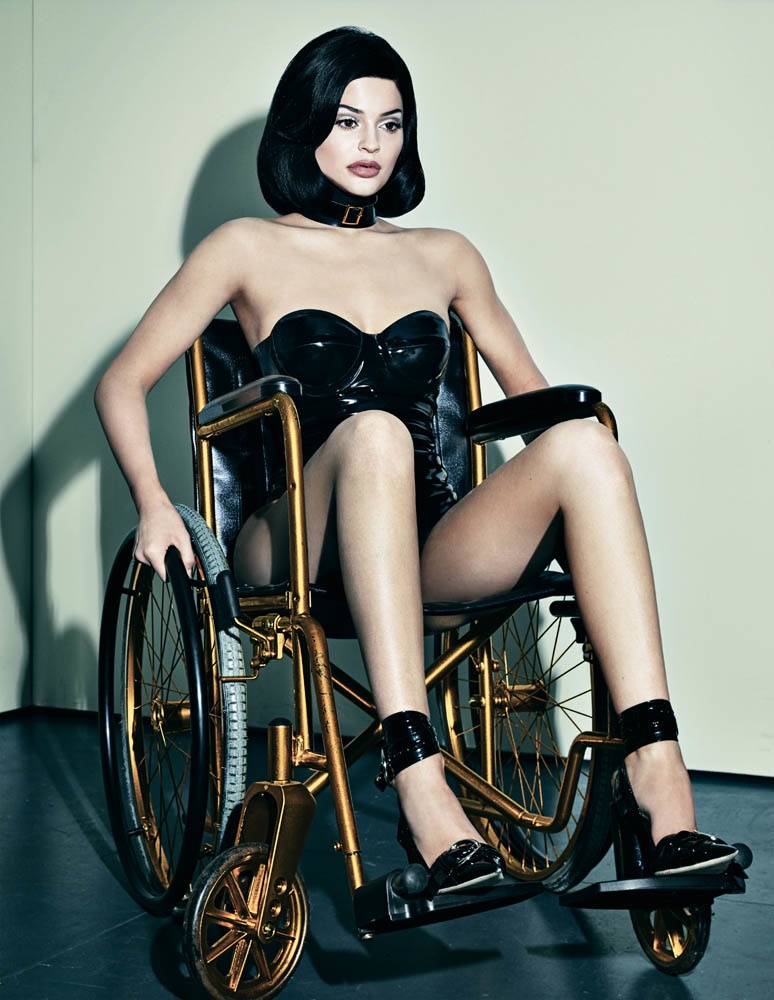 “When I was younger…I was excited about the image and representation disabled people were getting because we just saw a wheelchair in general,” she explained, “But I didn’t know how to take it, because I didn’t see that she was using our image to fetishize us. Later I was thinking, Where were all the other people with disabilities in chairs in the shoot?. Perhaps if Kylie had a say in the creative direction, she could’ve spoken up about it if she knew better, but I’m not even sure she did. I think some people are given a platform and don’t know what to do with it.”

If anyone knows how to promote inclusivity on their platform, Aaron is THAT girl.

For many people just like Aaron, the fashion industry simply is not doing as much as they can be to make much needed changes. According to a World Health Organisation report, disabled people make up 15% of the world's population; however, it is still largely neglected in discussions on diversity in both fashion and beauty. “We’re being neglected in the space of beauty,” Aaron explained, “I think that the industry has an obligation to create spaces that are accessible, clean, open, and well thought out for people that aren’t able-bodied.”

“I hope that one day soon, trans and disabled models will be able to reach the level of success any other talented and hardworking model can. I won’t settle for anything less.”

We could not agree more and cannot wait to see Aaron take the fashion industry by storm!

Sign up for W24's Newsletters, so you don't miss out on any of our hot stories and giveaways.

We live in a world where facts and fiction get blurred
In times of uncertainty you need journalism you can trust. For only R75 per month, you have access to a world of in-depth analyses, investigative journalism, top opinions and a range of features. Journalism strengthens democracy. Invest in the future today.
Subscribe to News24
Related Links
WATCH: Transgender actress Laverne Cox enraged over misgendered murder victims
Teen becomes first person with Down syndrome to win international beauty pageant
Sports Illustrated's models are now also breastfeeding moms, Paralympians and plus-size beauties
Next on W24
Let making sustainable fashion choices be your goal for the year