"If I saw a body like mine on a mag when I was a young girl, it would have changed my life" Seeing a curvy model on the cover of a magazine is a pretty rare occurrence. Seeing a size 22 model in a swimsuit is almost unheard of. Cosmopolitan UK just changed that.

Say hiya to our amazing cover star - @tessholliday! The October issue is out 31 August.

Buzzfeed News notes that unlike many other magazines who've featured curvy models on the cover, this time around the model is not clad in coat, covering all her curves. Rather, she's wearing a dope one-piece swimsuit.

Tess Holliday, is 33 and a size 22, US-based curvy model who has covered magazines like SELF and authored a book called The not so subtle art of being a fat girl, is the first-ever size 22 woman to be featured on a COSMO cover.

A lot of you have been asking about how to get a signed copy of my book, Sooooo.... there are 20 copies only, & the link is in my bio to purchase, we ship worldwide too! ?? If you want it personalized too, I can do that! Again, thanks for all your support of not only my book, but me as a person. I’ve been struggling mentally a lot this year, but I’m lucky to have such amazing followers & family ♥?????? #thenotsosubtleartofbeingafatgirl

I’m over the moon to finally share- This is totally surreal to see a fat body on the cover of a health magazine ?????? Thank you Self for changing the game with me! ?? RP @selfmagazine We’re thrilled to share our first ever digital cover, featuring model, author, and fat-positivity activist Tess Holliday (@tessholliday). From editor-in-chief @carolynkylstra’s editor’s letter: “Holliday identifies as a fat woman; we chose to give her a platform because she has insightful things to say about thriving in a world that devalues bodies of size. We also chose to feature her because size representation is necessary, especially for a national health media brand that can help guide the conversation about what it means to be healthy and how to make health accessible. You don’t know how healthy or unhealthy a person is just by looking at them, you don’t know what their health goals and priorities are, and you don’t know what they’ve already done or are planning to do for their health going forward. And moreover, you should know that concern trolling—using a person’s perceived health to justify making them feel bad about themselves—isn’t just counterproductive, it’s abusive.” — Photographer: @catherineservel, Wardrobe Styling: @marpeidro, Hair: @christianmarc at @forwardartists using @randco, Makeup: @kristinhilton at @thewallgroup, Manicure: @nailsbyemikudo at @opusbeauty | #TeamSELF #effyourbeautystandards

When the mag dropped this week, she tweeted her elated reaction on Twitter, saying "Phew, I’m literally a COSMO GIRL!! Can’t believe I’m saying that! ????
Thank you @CosmopolitanUK for this incredible opportunity ???? If I saw a body like mine on this magazine when I was a young girl, it would have changed my life ??
Issue hits stands 8/31! ".

Here are some reactions following the cover launch: 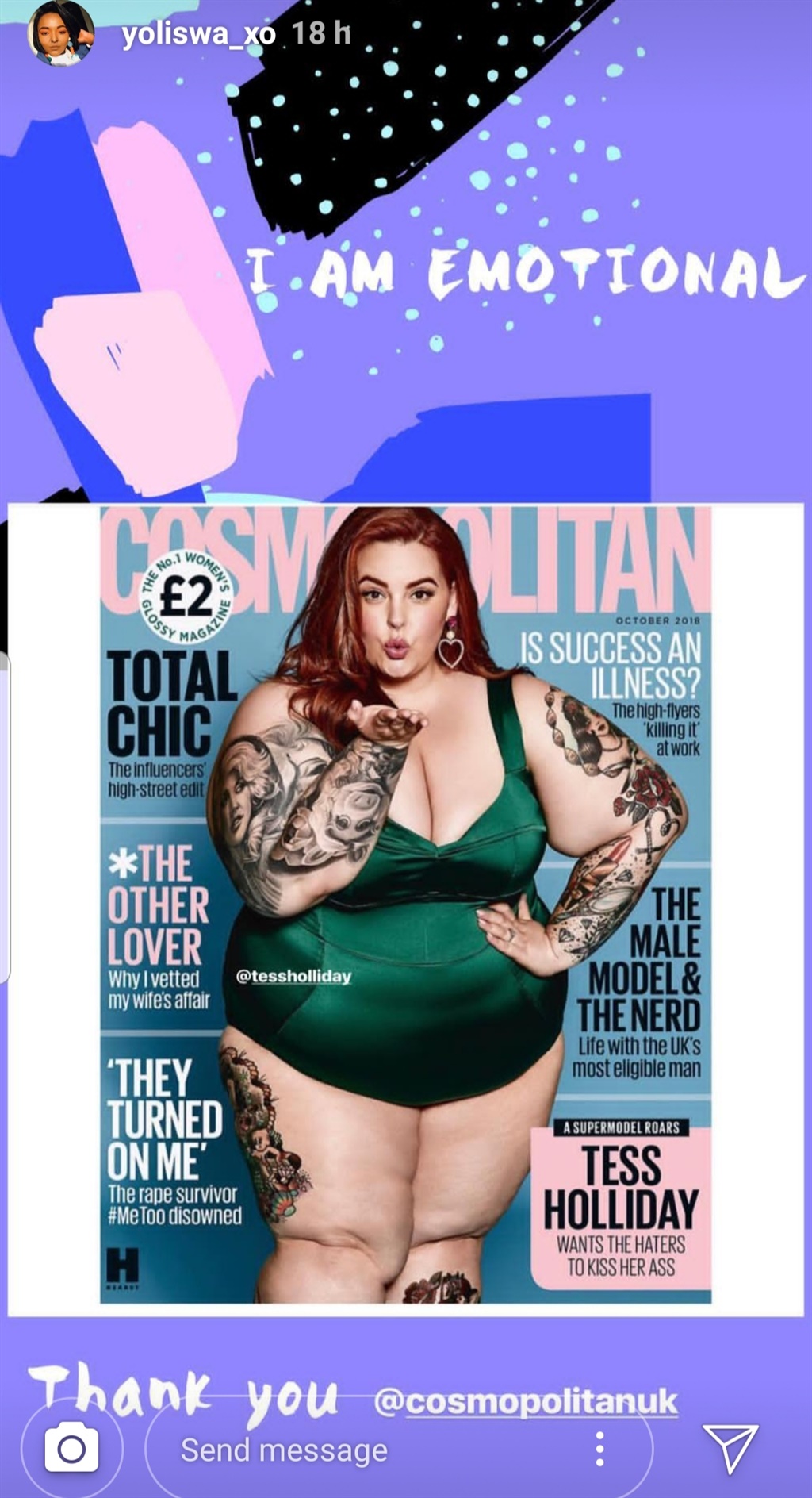 @ravishly We’re not crying, we’ve just got some representation stuck in our eye ??Huge congrats to @tessholliday on her COSMO cover! We’re so thrilled to see a fat body on the cover of a mainstream glossy ?????????? And looking absolutely stunning, too!

@joannemcnallycomedy?? WOW?? Remember when we were teenagers, and all we had was 'Heroine Chic' to look up to? That was all there was! The whole of the 90s was just Mag covers full of emaciated models sticking out the top of Calvin Klein knickers. Ribs & bones popping out from all over the place & they were heralded as fashion goddesses ???? anyways, thank F&$KKK those days are gone. Check out @tessholliday on the front cover of @cosmopolitanuk ??

And many more responses noted the importance of representation, saying they wish there were more women with curves on magazine covers, instead of just the one ideal of beauty, usually a very skinny model.

Lately, we've seen an increased representation of curves in fashion campaigns, ads and even on the runway, but magazine covers have lagged behind in this push for curve visibility.

We live in a world where facts and fiction get blurred
In times of uncertainty you need journalism you can trust. For only R75 per month, you have access to a world of in-depth analyses, investigative journalism, top opinions and a range of features. Journalism strengthens democracy. Invest in the future today.
Subscribe to News24
Related Links
(GRAPHIC) Curvy supermodel posts picture of scarred face just before fashion week - with a very...
"Being a 'plus-size' model in South Africa is definitely not a lucrative career"
Lena Dunham proves skinny doesn’t necessarily mean happy - plus 5 local curvy models giving us life
Next on W24
Loved for comfort: Cargo pants make a blazing comeback alongside oversized blazers and crocs