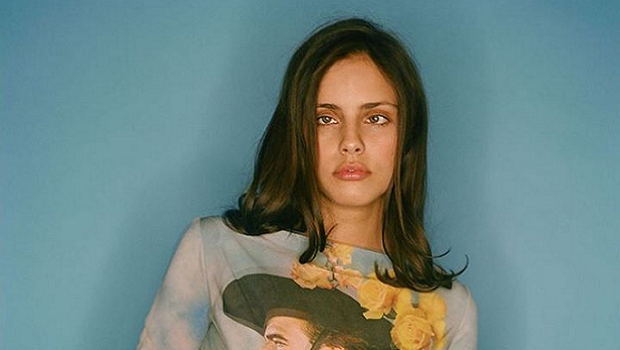 London born model Moffy Gathorne Hardy is on the rise. She has a Busy Philipps type kind of beauty, with very sharp features. She has been on the cover of POP magazine and has even been snapped for Vivienne Westwood, according to i-D magazine.

A few articles have described her as having a 'lazy eye', yet she has a condition called strabismus, where one's eyes do not align, more commonly known as being cross-eyed.

Amblyopia means the connection of eye to the brain is defective. So as you can deduce, strabismus and a droopy eyelid can both cause amblyopia (lazy eye), but all these three terms are different entities."

The modelling industry has embraced the likes of Winnie Harlow who has a skin condition, vitiligo; while models with Down's syndrome, a human hereditary/congenital/genetic disorder, have also more recently gotten more opportunities to walk the runway and be featured in editorial shoots.

Then there is also our very own local beauty, Lebohang Monyatsi is South Africa's very-first wheelchair-bound runway model. She was featured in a fashion show at last year's Soweto Fashion Week and has even competed in Warsaw, Poland in the Miss Wheelchair World pageant, according to News24.

But it's important to consider how we see inclusion and 'disability' vs. 'disorder', whether in fashion, beauty or in our everyday interactions with people.

The Center for Learning Disabilities notes that the difference between a disorder and a disability is that the former is a medical term, whereas the latter is a legal one.

The Western Cape Government defines disability as follows, "Disability is the disadvantage or restriction of activity caused by a society that takes little or no account of people who have impairments and thus excludes them from mainstream activity."

As considered in this article, models who are 'plus-size' are seen as those floating on the periphery of the fashion world, yet it's just the lack of inclusivity that defines them as fringe. People are viewed as 'normal' and others as 'abnormal', terms that are completely socially constructed.

"Disability needs to be defined within context, rather than focusing on the inability of people that inadvertently leads to stigmatisation and categorisation.

"The Integrated National Disability Framework has therefore adopted a socio-political approach to disability, whereby disability is located in the social environment. This takes cognisance of disabled people's viewpoint that disability is a social construct and most of its effects are inflicted upon people with disabilities by their social environment e.g. it is not the disability, nor the wheelchair that disables a person but it is the stairs leading to a building," says the The Western Cape Government.

Therefore, news that someone is modelling who has a disorder or condition known as strabismus shouldn't have to be classified as having a 'unique beauty' or a 'different' look, its rather the fashion world that is different in its approach to beauty.

Basically, it's not you, it's them.

We live in a world where facts and fiction get blurred
In times of uncertainty you need journalism you can trust. For 14 free days, you can have access to a world of in-depth analyses, investigative journalism, top opinions and a range of features. Journalism strengthens democracy. Invest in the future today. Thereafter you will be billed R75 per month. You can cancel anytime and if you cancel within 14 days you won't be billed.
Subscribe to News24
Related Links
Miss SA 2018 Tamaryn Green's style rules according to her Instagram profile
Faux fur is the season’s must-have item
Tiisetso Molobi talks about her fashion brand Urban Mosadi
Next on W24
Consumers still splurging on luxury items despite soaring prices