As far as late ‘90s icons go, it’s hard to imagine anything bigger than Pokémon - the Japanese entertainment franchise that continues to be beloved by both kids and adults all over the world.

Who at the turn of the millennium didn’t want to join the adventures with Ash, Brock, Misty, and Pikachu as they journeyed through the colorful Pokémon world?

And who - now in their adulthood - still dabbles in animated escapism in the form of anime series, Disney classics or Netflix adult cartoons?

Sure, the year 2019 came with its 1980s revivals, and threatened to dethrone the Fresh Prince of the 1990s. But as more '90s and early 2000s TV shows continue to resurface all over streaming platforms at a time when escapism is at an all-time high, we're also reliving our childhoods and/or nostalgic highlight reels, one fashion collaboration at a time.

And then there was the Vans x The Simpsons collab in 2020. The street culture brand honoured The Simpsons with a vibrant collection of footwear, apparel and accessories that celebrate iconic moments from the historic series.

The collection celebrated the Simpsons family (Homer, Marge, Bart, Lisa and Maggie) with depictions and references that die-hard fans would appreciate. Image supplied on behalf of Vans

With the last season we saw being set in 1985 - a time when the Levi’s brand had a massive imprint on culture - the timing was certainly 501 (read: fitting).

Tees and sweatshirts with Stranger Things graphics and phrases, jeans with hi-res character images, special edition Levi’s sundries, like upside down patches and red tabs (a nod to the 'Upside Down', of course), and a one-of-a-kind Levi’s batwing tee that uses the Stranger Things title graphics - all made part of this collection that was one of the most coveted during its shelf life.

And now, to add to our sartorial celebrations of pop culture moments, and Pokémon’s 25th anniversary this year, Levi’s has created a colorful, ‘90s-inspired Levi’s x Pokémon collection launching on 15 February 2021.

“It’s so fun to hear people talk about their love of Pokémon. Everyone has their favorite. So the fact that we had this ability to play and create with so many iconic Pokémon and characters, was really a special experience. It’s such a thoughtful collection that respects and celebrates the world of Pokémon, and it was so cool mixing our icons and history with theirs – it’s nostalgic and optimistic, with a little bit of escapism," says Karyn Hillman, Chief Product Officer at Levi Strauss & Co.

Amy Sachtleben, Director of Licensing at The Pokémon Company Internationa, adds to this sentiment, saying; “In its 25th anniversary year, the Pokémon brand is celebrating its enduring legacy in pop culture with fans around the world. Our friends at Levi’s have developed a collection featuring icons of the franchise that blends the spirit of the era when Pokémon first launched with the style sensibilities of today in a way only Levi’s could.

"This has been a tremendously fun collaboration with Levi’s to look back at Pokémon’s origins and offer fans who grew up with the brand and today’s trendsetters a way to infuse cute and clever Pokémon nostalgia into their style.” Inspired by the first season of the original Pokémon animated series, the collection includes a range of Levi’s denim, tops, bottoms, fleece, tees, and accessories that feature graphics and prints of both the popular characters and the woodland settings of the Kanto region.

So surrender to the hype by saving some money in time for the 15th, or prepare to fight when stock has run out:

Also included is a range of graphic tees that features throwback character art, such as Ash, Misty and Pokémon from that classic first season.

And, for fans of Misty, there’s even the Levi’s Misty Short with red braces, an homage to the iconic outfit she wears in the series. Accessories and sundries also get the Pokémon treatment, like a red and white trucker hat (R499) similar to the hat worn by Ash Ketchum in the series. 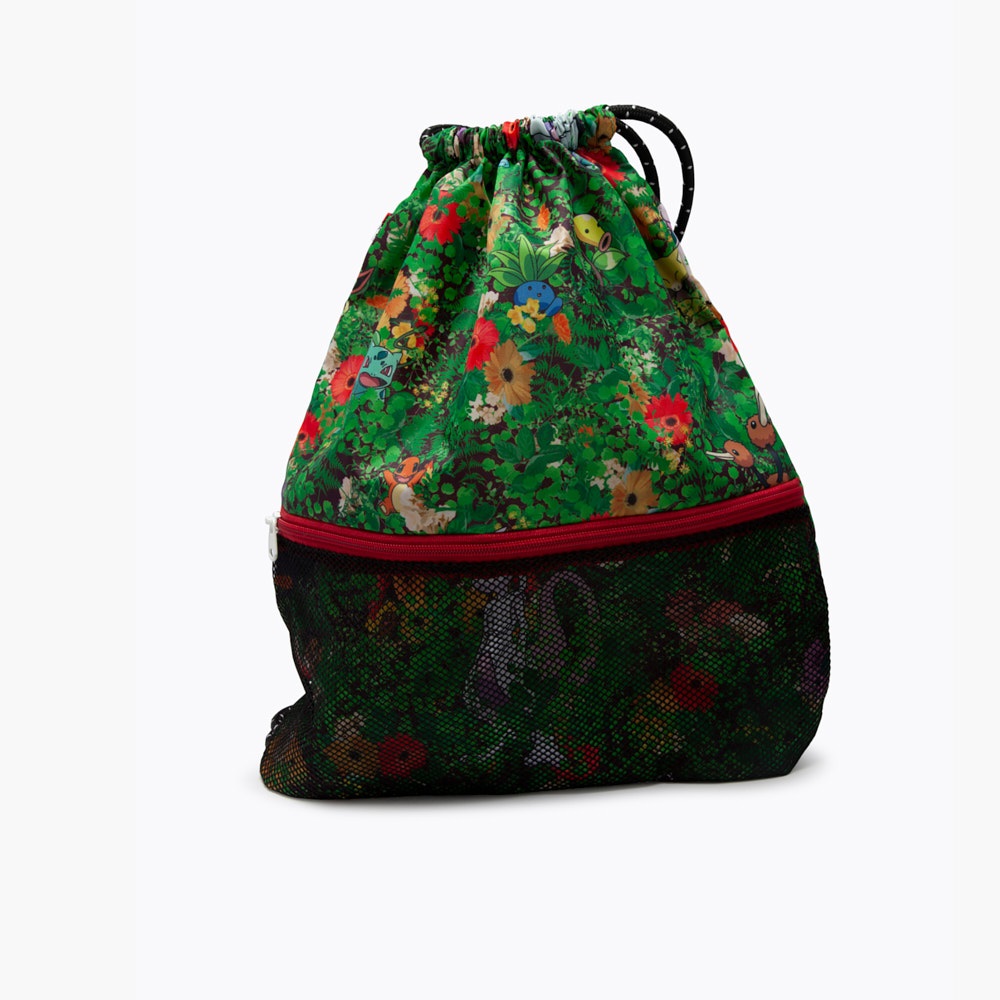 And, on the sundries, the collection features Pokémon branding on Levi’s back patches, Red Tabs that mimic red and white Poké Balls, and buttons stamped with Pikachu and Poké Balls.

READ MORE: Simone Rocha is the latest designer to be democratised in an H&M collab and we couldn't be happier This isn't Pikachu's first fashion cameo. In 2020, the Pokémon mascot was the protagonist of the Longchamp x Pokémon handbag collection, which you can still find on the French label's website today.

This collection reimagines the Le Pliage, the Maison Longchamp classic, as Pikachu "brings a touch of fun" to these bags which are available in four exclusive versions. Maison Longchamp displays its Pikachu, the mascot of the Pokemon Brand, Collection at the Longchamp Champs Elysees Store In Paris on October 28, 2020 in Paris, France. (Photo by Edward Berthelot/Getty Images)

The Levi’s x Pokémon collection will be available as of 15 February 2021 on www.levi.co.za and the Sandton City, Canal Walk, Menlyn, Cavendish, and V&A Waterfront Levis' stores.

We live in a world where facts and fiction get blurred
In times of uncertainty you need journalism you can trust. For only R75 per month, you have access to a world of in-depth analyses, investigative journalism, top opinions and a range of features. Journalism strengthens democracy. Invest in the future today.
Subscribe to News24
Next on W24
Ralph & Russo co-founders on haute couture, dressing Meghan Markle, and innovation inspired by Covid