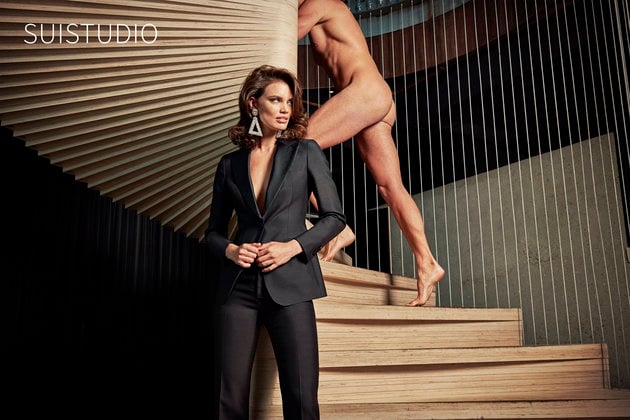 Suistudio is affiliated with the American menswear fashion label Suit Supply, only it caters exclusively to women. Last year Suit Supply came under fire for its Toy Boy campaign which was predominantly received as sexist and misogynistic.

Read: Cape Town will soon get its very own 'nude' shop

Read: What the Miss Teen SA Instagram scam reminds us about sending nudes

Vice president of Suistudio, Kristina Barricelli spoke to Huffington Post saying that imagery like this is needed in advertising, meaning strong, successful businesswomen who live in penthouses need to be seen.

(Only, these ones featured in the ad occasionally treat men as disposable…)

I agree, successful women need to be highlighted, but it becomes problematic when it’s at the expense of men.

Yes, we’ve become almost blasé when it comes to the representation of women in many forms of media because it has become so ingrained in the fabric of society that women are positioned as voiceless objects/accessories to men’s success.

The classic example would be half-nude women in male-lead music videos, others include Amal Clooney (a barrister at Doughty Street Chambers, specialising in international law and human rights) who is often exclusively referred to as actor, producer and director, George Clooney’s wife.

And sexist ads that perpetuate the idea that women should still strive to measure themselves against the success or mind of a man like in this South African #HappyWomensDay Bic ad that left us all gobsmacked:

Is it ever okay to turn the tables on objectification?

Hindustan Times notes that Barricelli also said that there is nothing wrong with using sex to sell. “Sex is a big part of fashion. If a woman has a handsome, naked man in her apartment, she is not objectifying him. Nobody knows what she is doing with that man. He merely becomes an object in the photo as does the couch and the suit and the other objects.”

So, this is not objectification?

Using sex to sell is one thing, but stripping one gender from agency and serving it to your clientele on a silver platter is quite another.

Google’s definition of ‘to objectify’ or ‘objectification’ is ‘the action of degrading someone to the status of a mere object’.

Seeing people as objects and stereotyping those objects perpetuates the binary idea that men are one way and women are another. There comes a point where we have to look at the damage done by these distinctions drawn between men and women.

When we objectify, we degrade, we delete voices that want to say different things. How will we ever know what different bodies could contribute to the conversation when they are not given any opportunity to speak for themselves?

We live in a world where facts and fiction get blurred
In times of uncertainty you need journalism you can trust. For 14 free days, you can have access to a world of in-depth analyses, investigative journalism, top opinions and a range of features. Journalism strengthens democracy. Invest in the future today. Thereafter you will be billed R75 per month. You can cancel anytime and if you cancel within 14 days you won't be billed.
Subscribe to News24
Related Links
No Donna Karan, we’re not ‘asking for it’
Model in Dove's offensive ad isn't as outraged as the rest of the internet
Dolce & Gabbana's new controversial sneakers have the internet fuming
Next on W24
Ponchos are back! Here's how to style this re-emerging trend