Meme culture has infiltrated many aspects of modern life, and now into fashion. This is what we call millennial.

Viktor and Rolf brought a series of fashion statements down the haute couture runway this past week. It's the luxury house's version of slogan tees.

These sassy phrases are emblazoned boldly across the voluminous ensembles.

It's as if the fashion house successfully took all our inner thoughts and made them fashion.

The message: read my dress and leave me alone.

And the internet decided to join in the fun by deep faking celebrity faces and adding their hilarious quotes on the designs.

“You're doing amazing, sweetie,” is a memorable quote by Kris Jenner.  Kris was encouraging Kim Kardashian on a nude photo shoot she was doing on one of their episodes.

The phrase has since been adapted as a reaction image.

READ MORE: Celebrities are loving this Jean Paul Gaultier blazer that you could never wear to work “There can be a hundred people in the room, and 99 don’t believe in you, but one does.”

This Lady Gaga quote went viral last year. She said the phrase over and over again while describing the support she got from her A star is born co-star Bradley Cooper. This is one of the ultimate celebrity shade memes online. Mariah was asked about Jennifer Lopez in the early 2000s, and she simply shook her head and stated, “I don’t know her”. Britney’s favourite phrase from her single ‘gimme’ is officially one of the most recognisable catchphrases in pop culture. 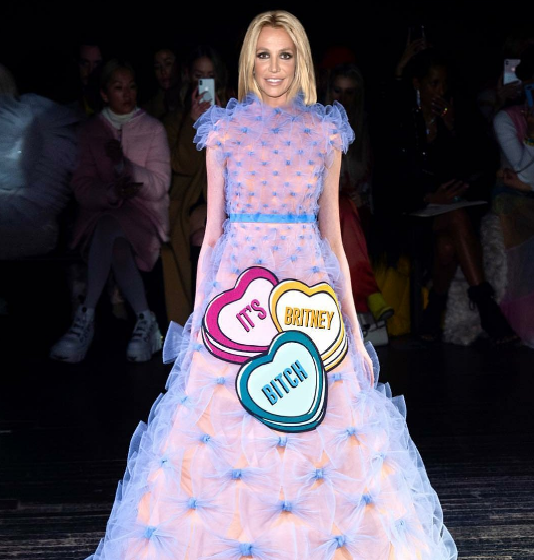 We really would love to see Rihanna or Solange in every single dress. Or one of their own making.

And who says you can’t run with this creation? Or maybe a celeb will when they organise the next bachelorette party, perhaps?

What do you think? Chat to us here

We live in a world where facts and fiction get blurred
In times of uncertainty you need journalism you can trust. For 14 free days, you can have access to a world of in-depth analyses, investigative journalism, top opinions and a range of features. Journalism strengthens democracy. Invest in the future today. Thereafter you will be billed R75 per month. You can cancel anytime and if you cancel within 14 days you won't be billed.
Subscribe to News24
Related Links
Dior puts on circus-themed couture show
Celebrities are loving this Jean Paul Gaultier blazer that you could never wear to work
Karl Lagerfeld absent for Chanel haute couture show in Paris
Next on W24
Would you spoil your furry friend with the Gucci pet bed worth R122 000?

Get the newsletter
Voting Booth
Do you think it's important to get married in this day and age?
Please select an option Oops! Something went wrong, please try again later.
Yes, it's important in order to create a family unit and for companionship
22% - 705 votes
Not at all. Being single is far more liberating
9% - 289 votes
There is no general answer to this, it's each to their own
50% - 1601 votes
Yes, society still frowns on unmarried people, especially women
1% - 42 votes
It depends on whether you are able to find a compatible partner
18% - 570 votes
Previous Results
Fashion
'Being frugal and spending R550 on my Durban July dress almost ruined my style...