Why we shouldn’t be wearing “feminism” on our chests

The Spice Girls' “Girl Power” movement of the ‘90s has now been replaced with a feminist message propagated on the chests of Instastars, celebrities and women everywhere.

Political slogan tees reading “The Future Is Female”, “Feminist AF” and the latest, Dior’s R9190 ($700) version, “We Should All Be Feminists”, are comparable to the popular, yet contradictory, 2000s capitalist venture which stuck communist revolutionary Che Guevara’s face on t-shirts.

It makes us wonder whether feminism is just the fashion industry buzzword of the moment? Ellecanada.com asks what this will be exchanged for next season - maybe “neo-Gothic”?

Fashion often reflects the societal pulse of the moment, but seeing women and women's issues as “so hot right now” is not liberating.

Fashion is ultimately a capitalist system and designers will be as political as they need to be in any given climate. A great example being 2014 - the year of the protest - which saw Karl Lagerfeld hosting a protest-inspired fashion show at the Grand Palais in Paris. 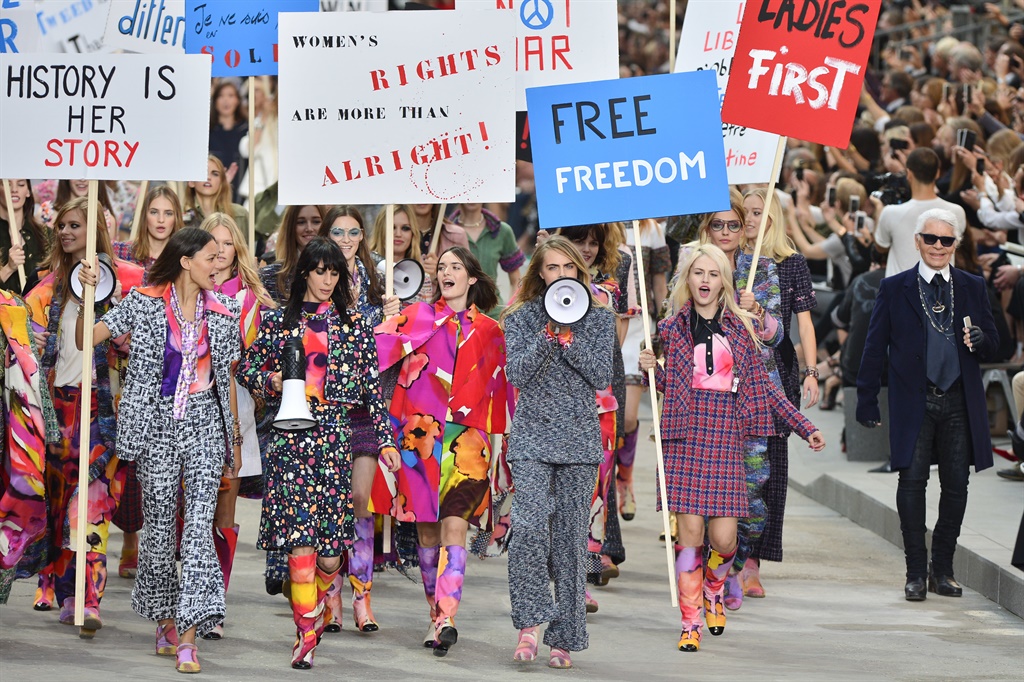 We saw a megaphone wielding Cara Delevingne, and an enthused, placard brandishing bevy of models like Kendall Jenner and Joan Smalls with signs that read, “Women’s Rights are More than Alright”, “Ladies First” and “History is Her Story”.

According to The Guardian, Lagerfeld is a rather unlikely champion for feminism. This is the man who has been known to dismiss concerns surrounding size-zero models, even once saying those who complain about models being too skinny are “fat mommies with bags of crisps”.

But even worse than this feminism for profit business is how it is consumed by some.

In “Feminism Is the Latest High-Fashion Trend,” Cleo Levin writes that some fashion peeps are finding this “new trend” rather terrifying as trying introduce these items into their existing hyper-stylish wardrobes is very challenging for them.

“A slogan tee, with my Celine silk trousers and Blahnik heels?! How preposterous!”

When we become more concerned with seeing how feminism can make us look cool instead of thinking how inequalities are experienced by women the world over, we are, as Cleo Levin says: “…not so much supporting feminism as accessorizing with it.”

Now I’m not saying burn your “I am feminist, hear me roar” t-shirt. No.

But this “trendy feminist” wave is nothing but a watered down version of the equal rights movement women like Gloria Steinem, Aung San Suu Kyi and Malala Yousafzai have advocated for, fought for and almost died for.

You can argue that at least the word is getting out in some shape or form, right?

On the one hand yes, maybe it’s helping a young, social media obsessed crowd who otherwise might not have known anything about feminism to become more mobilised and aware of the movement.

But is it substantial enough?

If this mobilisation fires up and engages a female-centric dialogue, which produces change in a real way, then yes. But, playing around on the surface, taking part in women’s marches because your friends are doing it or wearing a “Feminist AF” t-shirt because it adds “edge” to your look is, ultimately, ignorant bordering on disrespectful.

ManRepeller notes that trendy feminism often means white feminism, which doesn’t allow for much intersectionality. This doesn’t address inequality, especially not in a country like South Africa. And not in most third world countries.

A "modern" feminist message and approach such as this might appeal to more, but will benefit less.

We live in a world where facts and fiction get blurred
In times of uncertainty you need journalism you can trust. For 14 free days, you can have access to a world of in-depth analyses, investigative journalism, top opinions and a range of features. Journalism strengthens democracy. Invest in the future today. Thereafter you will be billed R75 per month. You can cancel anytime and if you cancel within 14 days you won't be billed.
Subscribe to News24
Related Links
Why condemning Joost for his past mistakes is not an act of feminism
Everything you need to know about the women's march in America
The most eye-catching posters from the Women's Marches against Trump
Next on W24
Would you spoil your furry friend with the Gucci pet bed worth R122 000?