Questions no woman should answer in a job interview 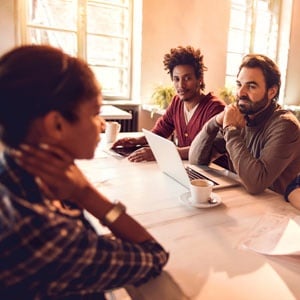 “Plan on having kids soon?”

“What are your child-care arrangements?”

Career experts agree that questions asked during a job interview are meant to determine whether one is a good fit for the organisation and a specific job. Yet, women are still experiencing sexist questioning during interviews, more often pertaining to their personal lives, rather than their actual qualifications.

2010 Statistics South Africa depict that in 2012 women only held 45% of positions in the non-agricultural employment sector and in 2011 only 77% of women earned as much as men do for doing the same job.

Is there an outright bias here? Do employers simply favour hiring men over women because they are presumed to be less ‘complicated’?

A recent Huffington Post report stated that women were often either seen as ‘too bossy’ or ‘too reticent.’ This, of course, is nothing new.

Women regularly deal with inappropriate sexual advances, and mothers in particular appear to be at the receiving end of most bias handed out by employers. Which is why women are questioned in interviews about their priorities. Will she be able to cope with all her work as she seems very dedicated to her children? And when the opposite is true and she is coping she is often criticised for being too dedicated to her job. "You work all the time, shouldn't you spend more time with your children?"

The Huffington Post, recently shared feedback from their female readers, sharing questions they’ve been subjected to in job interviews:

•    "I was asked during fundraising meetings ‘How do we know you're not going to run off and have a baby?'"

•    “Can you flirt with the customers to make them stay longer?”

•    ‘What does your husband make of your career plans?’

So, how are you supposed to respond to such intrusive questions?

Next time an employer asks you if you have kids, redirect the question into what he/she is really asking, for example: “Perhaps you’re asking if I’m focused on my work and can handle late hours? I assure you, I can.”

Ask your interviewer why the question is relevant

Although the question may seem absurd, there could be a genuine reason behind it. So let’s make sure of this first.

You’re allowed to push back

Career coach at CareerWorx, Lisa LaRue, agrees that women shouldn’t answer sexist questions such as “Do you plan on having children?” or “Are you in a relationship?’

Managing director of Career Library TV Stephan Conway’s advice is perhaps the most epic:  Ask whether the questions are ‘standard procedure’ because working for a company that promotes and values equality is important to you.

To questions that seem unrelated such as, “What does your partner do for a living?” or questions about your stance on religion or abortion (unless it’s a job at a religious institute or planned parenthood clinic), calmly state that you don’t think this limits your ability to do your job.”

Above all, keep it cool and keep it calm.

What are some of the oddest questions you’ve faced in a job interview?, Email us we’d like to hear from you.

We live in a world where facts and fiction get blurred
In times of uncertainty you need journalism you can trust. For 14 free days, you can have access to a world of in-depth analyses, investigative journalism, top opinions and a range of features. Journalism strengthens democracy. Invest in the future today. Thereafter you will be billed R75 per month. You can cancel anytime and if you cancel within 14 days you won't be billed.
Subscribe to News24
Related Links
5 creative jobs that actually pay the bills
Are you having a mid-career crisis?
Next on W24
Spain approves draft bill to introduce paid menstrual leave

Get the newsletter
Voting Booth
Do you think it's important to get married in this day and age?
Please select an option Oops! Something went wrong, please try again later.
Yes, it's important in order to create a family unit and for companionship
22% - 531 votes
Not at all. Being single is far more liberating
10% - 230 votes
There is no general answer to this, it's each to their own
49% - 1172 votes
Yes, society still frowns on unmarried people, especially women
1% - 36 votes
It depends on whether you are able to find a compatible partner
18% - 438 votes
Previous Results
Fashion
Ponchos are back! Here's how to style this re-emerging trend