Remote jamming: Watch how easy it is 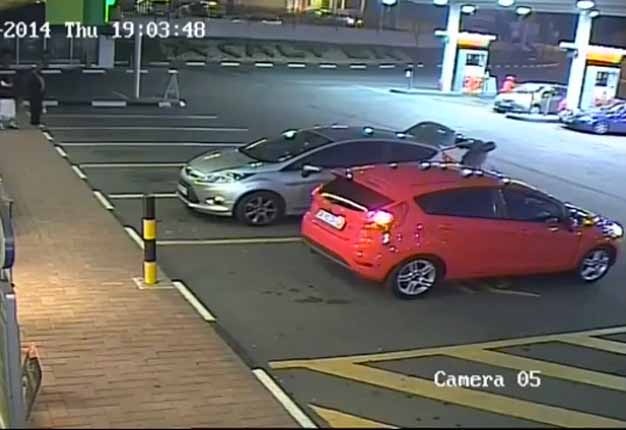 <b>GONE IN 60 SECONDS - OR LESS:</b> Watch how jammer-scammers cancel a convenience store shopper's car's remote locking then calmly steal what looks like a laptop from the boot. <i>Image: Supplied</i>
JOHANNESBURG, Gauteng - There's a new breed of criminal out there, one that steals by remote control and is cool enough not to make passers-by suspicious.

They're called jammers and what they jam is the radio signal sent to your car's door locks from your key fob as you stroll away from your car; you think it's locked, but it isn't. The doors and boot are still open and the thieves are probably just a few metres away, waiting.

Until you walk into the takeaway shop, the shopping mall, even your home. Whatever is on your back seat, in the boot or footwells becomes past tense as the thief, getaway car nearby, casually loots whatever there is to take. Perhaps even your house keys?

The crime is on an upward trend; jammers, after all, can be bought through the internet - did you know that? And your insurance company is unlikely to pay out because the thieves leave no sign of a forced entry... oh, you didn't know that, either?

John October, spokesperson for insurers Dial Direct, told Wheels24: “Remote jamming is increasingly being used by criminals who watch their targets as they exit their car then use another remote to prevent the car locking.”

October notes that this puts victims in a tricky position when it comes to proving to their insurers that a theft actually took place because there are no signs of forced entry.

DON'T KEEP A LID ON IT

The only counter to jamming is to press the remote unit's button close by your car (yes, we know it's cool to walk away and watch your indicators flash!) and then try to open the driver's door for confirmation that the locks have engaged. NB: This won't work with some upmarket cars because they are programmed to open at first touch of the door release if the remote control is nearby.

If you must leave stuff in your car then make sure it is in the boot. And don't put you laptop or similar in the boot when the whole world can see... better still, don't leave anything worth stealing in your car. Wheels24 staff even leave the lid up on the centre cubby and the hatch open on the facia glove box when we park at the airport - no point breaking into a car when there's nothing to steal...

October added:  “Of course it isn’t always possible to avoid carrying items of value your car. However, we can take care to carry only what is necessary, keeping it hidden from view, and then remembering to remove valuables when reaching your destination.”

He concludes with this advice. We suggest you heed it or you could be the next car the guys in the video hit:

• Never leave items in full view on car seats - parked or driving. You'll stop at a traffic light eventually...
• Park your car in a secure car park where there are many vehicles  and security personnel.
• Lock your car when driving and when parked. When using a remote, double check that the locks have engaged.
• Empty your car at the end of each day - the more stealable stuff in it, the more lilkely you'll lose it all.
• Never leave house keys or important papers in your car.
• Don’t leave car registration papers in your car.
• Install an alarm system on your vehicle.
• Install window safety film - it repels casual smash-'n-grabbers at traffic lights.
• Make sure you have adequate insurance. Seeing as how Dial Direct saw fit to send us this information, you might care to give them a call first.

We live in a world where facts and fiction get blurred
In times of uncertainty you need journalism you can trust. For only R75 per month, you have access to a world of in-depth analyses, investigative journalism, top opinions and a range of features. Journalism strengthens democracy. Invest in the future today.
Subscribe to News24
Next on Wheels24
Driver is amazingly calm despite rolling his Jeep!