The “missing” 9-GP, owned by Springbok great Joost van der Westhuizen, has been sold for R167 000 and exceeding its estimated price.

The winning bid for the collection 1-GP to 8-GP came close to matching its estimated price of R2-million at the Stephan Welz & Co  auction in Johannesburg (November 22).

Numbers '1-GP to 8-GP' were sold to a classic car collector who intends to use them on eight of his prized possessions, says Stephan Welz & Co consultant, Jack Rosewitz. 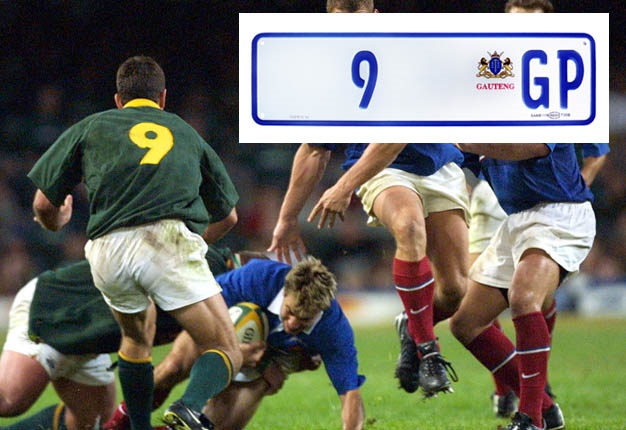 Confined to a wheelchair suffering from a rare motor neuron disease, Van der Westhuizen placed his 9-GP plate, reflecting his No.9 Springbok rugby jersey, on auction after being told that Stephan Welz & Co  was selling what it describes as “South Africa’s most valuable number plates: 1-GP through to 8-GP".

The addition of Van der Westhuizen’s plate raised the estimate for the entire collection to R2.5-million. As he so often proved did on the rugby field, Van der Westhuizen performed beyond expectations at the auction, with his personalised number being snapped up as an item on its own.

Rosewitz says: “We were delighted that we received a good price for Joost’s number plate, though we would really have liked to see it fetch a higher price because the sale was for such a good cause."

Other South African legends were also represented at the auction. Number plate 'Mandela GP' sold for R66 000, and a Cobra race car once owned and raced by former South African cricket captain Clive Rice, who passed away in 2015 after a battle with cancer, was sold for R222 000, matching its estimated price.

A measure of how sought-after personalised numbers are is that more than 500 000 have been sold in South Africa, exceeding the most optimistic projections by the Department of Transport, which has generated more than R500-million in revenue from people who pay a premium to buy their special numbers.

Click on the gif below to read the original article.

View the plates below:

We live in a world where facts and fiction get blurred
In times of uncertainty you need journalism you can trust. For only R75 per month, you have access to a world of in-depth analyses, investigative journalism, top opinions and a range of features. Journalism strengthens democracy. Invest in the future today.
Subscribe to News24
Related Links
Rare number plates in SA: Joost's lucky 'No. 9' part of R2.5-million auction
'Mandela GP' to be sold: 10 prized SA licence plates could fetch millions
Next on Wheels24
AutoTrader Vehicle Search