Cape Town - In 1994, BMW released a naked version of its popular R1100RS sports touring motorcycle. The R1100R version received mixed reviews with some critics lamenting the decision to expose the bike’s naughty bits.

This isn’t what BMW was about, they complained. Despite a bumpy start the naked Boxer persisted and today we have the R1200R, a bike with no qualms about what it is.

Naked bikes look tremendously cool but the compromises resulting from brutish engines mixed with poor wind protection rarely endear them to many people.

So is this naked bike by BMW pleasant to live with?

BMW decided to ditch the telelever anti-dive front suspension in favour of regular telescopic upside-downs. The result is a R1200R that weighs less than before, gives precise feedback on road conditions while sacrificing a modicum of comfort.

Perhaps most importantly the traditional forks allow the fitment of a large radiator in front of the engine.

This is important since the BMW air head boxers of yore have evolved into modern liquid cooled power plants that conform to European emission standards and superbike performance expectations.

Acceleration is impressive once you clear first gear. Pulling off in first feels almost sedate and at no point does the front wheel threaten to pop into the sky unless you really want it to.

It is therefore a safe motorcycle to return to after a few years away from biking, having taken care of family matters first.

The gearbox is typically clunky for a BMW but the wet clutch and shifter position permit the gears to change accurately. I encountered no false neutrals or sticky shifts even when riding with tennis shoes.

I easily get besotted with new motorcycles but the honeymoon usually wears of just as quickly once I unearth the inevitable shortcomings. During the two weeks I was allowed to test the R1200R I can honestly say that I had no problem riding this BMW every single day.

It’s just so easy to live with. The ergonomics are pleasing with all the buttons within easy reach, the upright seating position doesn’t put strain your back, and the distance between the foot pegs and seat don’t cramp one’s legs.

READ: How to get your motorcycle summer ready in SA

Unlike the Ducati Monster 1200S tested by Dries van der Walt in 2015, the R1200R is easy to come to terms with and doesn’t require your body to adjust to the design.

The handle bars are wide allowing one to enter corners with confidence. I found it easy to scrape the pegs on tar with a few millilitres of rubber on the outer edges of the tyre still remaining unused.

Unfortunately the complete lack of wind protection prevents you from riding at highway speeds for extended periods of time. Although it may spoil the naked look of the bike, I highly recommend the fitment of a screen – even if it’s just a small one.

The BMW R1200R is easily the best equipped roadster on the market. The computerised gadgetry puts most cars to shame, yet it isn’t so geeky that it loses valuable street credibility.

Like several other modern bikes the R1200R has traction control, ride modes, electronically adjustable suspension and a host of performance-related info displayed on the LCD screen.

READ: Need a new motorcycle? Here's all you need to know about dual-sport bikes in SA

The factory fitted heated grips and keyless start are welcome additions. It takes a little getting used to not inserting the key in the ignition or fuel filler cap, but you quickly get used to it and even grow to prefer it.

It may be slight overkill for the daily commute and it isn’t well suited for touring in its standard form, but as a weekender it’s definitely one of the better motorcycles out there.

The final measure for some is whether it draws the right kind of attention of passers-by. I can happily report that not only did pedestrians ogle it, but other bikers engaged me in conversation about the R1200R, and this may very well be the ultimate seal of approval.

We live in a world where facts and fiction get blurred
In times of uncertainty you need journalism you can trust. For only R75 per month, you have access to a world of in-depth analyses, investigative journalism, top opinions and a range of features. Journalism strengthens democracy. Invest in the future today.
Subscribe to News24
Related Links
2015 BMW R1200 RS
Next on Wheels24
Whoa, now that's a bike! BMW R 18 Dragster is a custom-built drag machine 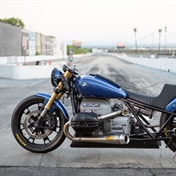