<b>TAKING ON THE ROUGH STUFF:</b> BMW's latest F650GS Sertão is as impressive on the dirt as it is on tar. <a href="http://www.wheels24.co.za/Multimedia/Manufacturers/BMW/2012-BMW-F650GS-Sertao-20120227" target="_blank">Image gallery</a>
Good news for fans of BMW’s venerable F650GS Dakar: it’s back – albeit with a new nomenclature, minor cosmetic changes and a modern paint job.

BMW recently introduced the new G650GS Sertão to the local media with a two-day outing that had us exploring the wilds north of Pretoria.

The Portuguese word “sertão” means wilderness and is often used to refer to the semi-arid north-eastern region of Brazil. This harsh landscape is not unlike portions of our own continent so is an apt name to convey the image of a machine capable of dealing with such a hostile environment.

In its Dakar incarnation the 650GS has developed a loyal following with its reputation of being a frugal and reliable adventure tourer. It is this reputation on which BMW obviously hopes to capitalise to drive sales of the new bike. Like its predecessor, the Sertão is essentially the standard 650GS with longer-travel suspension, spoked wheels (21” front instead of the 19” on the standard bike) and trimmings such an aluminium engine guard to make the bike more off-road capable.

As a media launch, the choice of the route was inspired: it gave us the opportunity to experience the bikes in conditions that varied from urban streets and highways to dirt roads, all of which the bike handled with aplomb.

The launch event started at Tintswalo at Waterfall in Midrand, where we were given a brief presentation before mounting the bikes and heading off to our first stop near Cullinan, east of Pretoria.

The first leg of the ride was almost exclusively highway and gave me the opportunity to evaluate the Sertão’s behaviour at speed. Despite my forebodings, the long-travel suspension didn’t adversely affect the bike’s road manners as I worked my way through the afternoon traffic on Gauteng’s busiest highway. Not having had a great deal of saddle time on the 650GS prior to this event, I began to understand why they were so popular as commuters. 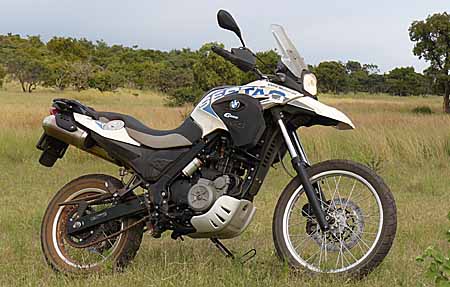 INTO THE WILD: BMW's new F650GS Sertão does a good job on game-viewing tours.

We headed north after a comfort break at Cullinan and soon the blacktop gave way to dirt. Up to this point we had been instructed to remain behind the ride leader but when we reached a twisty and sandy stretch of gravel road the reins were slackened and we were allowed to choose our own pace.

With the ABS turned off I used the opportunity to see how the Sertão handled the treacherous surface. The bike wasn’t very fond of thick sand but even so it gave me the confidence to reach speeds not much slower than I did on the highway.

We reached our overnight destination, Hayward’s Safaris in Boekenhoutskloof, and took another break before we took the bikes on a game drive through the private nature reserve. Here we kept the speed down to comply with reserve rules, which allowed us to observe the ample game population – wildebeest, kudu, zebra and warthog aplenty.

The riding conditions varied from well-defined tracks across grassy plains to somewhat more technical riding up and down hillsides on “roads” littered with marble-like rocks that felt like ball-bearings under the wheels.

Back at the camp I reflected on the Sertão’s ability to take everything we threw at it in its stride. As a fellow hack put it over dinner, it simply did everything it said on the box. The Sertão is not likely to turn the world of enduro racing upside down but it is competent enough to allow you to explore areas you wouldn’t be able to reach in anything other than a serious 4x4. In my opinion it's a true dual-purpose bike: perfectly capable of handling commuting as easily and comfortably as it handles venturing into the wilds.

Costing just over R89 000 for the full-spec version, the Sertão seems to be a tad expensive until you consider that figure includes anti-lock brakes and heatable grips. It retains all the character that made the Dakar a popular choice but has stiff competition from other brands – many of them of more modern design. It remains to be seen if the market will warm to it as much as it did to its predecessor.

That said, it's still a very likeable bike that feels more powerful than the spec sheet might lead you to believe. Very few people who buy this bike will have reason to regret their choice.

We live in a world where facts and fiction get blurred
In times of uncertainty you need journalism you can trust. For only R75 per month, you have access to a world of in-depth analyses, investigative journalism, top opinions and a range of features. Journalism strengthens democracy. Invest in the future today.
Subscribe to News24
Related Links
BMW F650GS Sertão image gallery
We drive BMW's heaviest hitter
Next on Wheels24
REVIEW | Energica Eva signals the arrival of the electric motorcycle in SA