Rossi not planning 'to say ciao' with Yamaha satellite team Seven-time MotoGP world champion Valentino Rossi insisted Wednesday (May 20) that he has no intentions of merely bidding his legions of fans "ciao" when he steps away from the Yamaha factory team.

Rossi, 41, already knows he has lost his seat at the elite outfit for next season with 20-year-old Frenchman Fabio Quartararo taking his ride.

However, the Italian legend has a seat waiting for him at satellite team Yamaha-SRT.

There’s more to this story
Subscribe to News24 and get access to our exclusive journalism and features today.
Subscribe
Already a subscriber? Sign in
Next on Wheels24
Facing challenges and coming out on top - How the Seller Racing team beat the odds in 2020 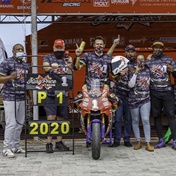