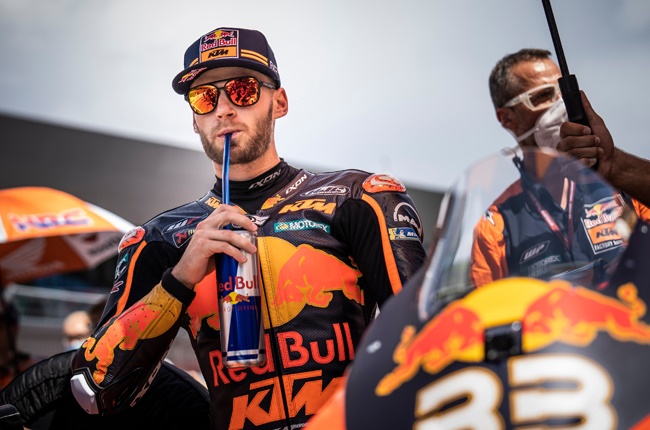 • In the championship, he occupies the fourth position.

• Binder qualified 17th for the race, but had a good fightback up the grid.

It wasn't an easy day at the office for Brad Binder during this past weekend's Austrian Grand Prix (16 August).

The South African rider qualified in a lowly 17th place, which left him with a mountain to climb if he was to bring home a good haul of points.

Binder has proven over the first three races of the season that he has what it takes to compete in MotoGP, which culminated in him taking the victory two Sunday's back in Brno. Hot of his first win in the premier class, Binder and the rest of the fraternity headed to the Red Bull Ring in Austria, the home race for his KTM team and main title sponsor, Red Bull. During qualifying, Binder wasn't too far off the pace, but the gap of 0.620 seconds was enough to relegate him to 17th place on the starting grid. Unfortunately, it also prevented him from advancing to the second part of qualifying. It was a tough one, mainly because his team mate, Pol Espargo, managed to qualify in fifth place on the same equipment.

Going into the race, Binder knew that he had is work cut out if he was to make an impact on the 28-lap GP. And he duly delivered when it mattered.

In a matter of laps, the South African rider picked off riders ahead of him, so much so that by the end of lap 8, he was in eleventh place. However, the race took a nasty turn when Franco Morbidelli and Johann Zarco made contact. The red flag was brought about and the track cleared before racing could resume.

With the remaining 20 laps to be completed, Binder got off to a good restart in ninth place and quickly found himself in a tussle with the riders alongside him. He made daring passing manoeuvres, but also benefitted from the misfortune of others like Yamaha's Maverick Vinales and Espargo.

For Espargo, especially, it was a bitter pill to swallow, because he crashed out of the race after leading from the front. In the meantime, Binder made the most of his day on the bike to race over the finish line 5.5sec behind race winner, Andrea Dovizioso from Ducati.

After the race, Binder said: "Today was much better than we expected. I was happy with fourth position; I have to say. It was tough at the beginning because I was able to make up places, and it was a shame about the red flag, but it allowed me to restart from higher up on the grid. I didn't pass too many riders after the restart, but there were a lot of crashes. On the one hand, I'm quite satisfied, but then I was also pretty lucky. Things turned out well, but let's work again for next week."

In the 2020 championship standing, Binder is currently in the fourth position with 41 points, behind Vinales (48 points), Dovizioso (56 points), and Fabio Quartararo on 67 points.

How would you describe Binder's amazing performance in MotoGP so far in 2020? Email us.

Solid come back today?????????. 17th on the grid to finish 4th. Thank you team @ktmfactoryracing . Super keen to give it another go next week. Thanks for all the support???? #redbull #KTM

We live in a world where facts and fiction get blurred
In times of uncertainty you need journalism you can trust. For 14 free days, you can have access to a world of in-depth analyses, investigative journalism, top opinions and a range of features. Journalism strengthens democracy. Invest in the future today. Thereafter you will be billed R75 per month. You can cancel anytime and if you cancel within 14 days you won't be billed.
Subscribe to News24
Related Links
WATCH | Ready for Austria! Brad Binder looking for another strong result at KTM's home race
WATCH | Brad Binder reflects on the win in Brno that shot him to MotoGP stardom
Next on Life
Riding a BMW R18 classic bike: A day in the life of an apex predator with Brutus, the Berlin Bruiser