• Aftermarket parts has received a bad reputation in recent years.

• These parts are as good as OEM ones.

Neil Hamilton is one of our regular readers and often writes in to us with article feedback, mostly great reads with hilarious commentary. This time he writes to us sharing his view about aftermarket car parts.

I am writing in response to Chris O' Carrol's article regarding aftermarket parts, published on Wheels24 on

I'll start by saying – use Masterparts; you cannot go wrong! The advice is excellent, the service is great, and the spares supplied are top quality.

Does it sound like I'm plugging for his company? Maybe, but I also agree with everything he writes in his piece.

You see, we as the motoring public, have been duped by agents and dealers to think that "all cars MUST come with a service plan or warranty plan or maintenance plan, etc." and that "if it's not our product, it's not original".

Now, yes, obviously if you just forked out a few hundred thousand rands on a new car, it MUST have a warranty at least, a service plan is probably optional (you still pay for it, no free lunches mate). You'd also likely want to keep it's resale value up by using so-called "original" parts.

Then you get the rest of us. Those who look for and buy decent used cars, do a bit of homework, find a reputable garage or mechanic who you can trust, AND knows your vehicle and hasn't got bazillions to spend on "original" spares. Because you see, there is no such thing as "original" spares… just as Chris indicates in the article.

Most manufacturers will have contracts with several suppliers to make parts for them, such as FEBI, Mahle, Bosch, etc. The difference, and the only real difference, between buying at a reputable parts dealer and the actual agent (be it BMW, Audi, Toyota, etc.) is that in the case of the spares bought from a parts dealer, the name has been taken off, just as Chris says.

Now, why is this important, and why does the aftermarket parts business get a bad rap? Again, as Chris says, some parts manufacturers make spares without having the contracts with the vehicle manufacturers, usually due to inferior quality or design. These are the "pirate" parts one hears about. A wheel bearing made from substandard metal and inferior design, although similar, will not be as good as that produced by an OEM-equivalent manufacturer. The OEM equivalent is often made in the same factory as the OEM part, on the same production line and just doesn't bear the mark of the manufacturer – in most cases the part number and serial number, and even batch numbers can match… it's as good as the supposed "real" thing. 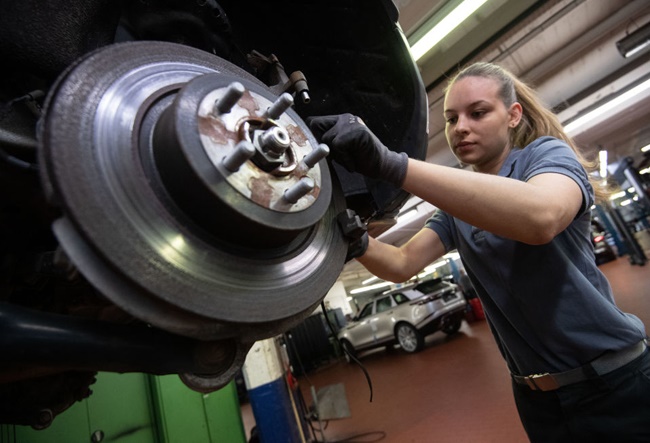 So, no, don't expect your shiny BMW or Merc to keep running if you bought a cheap part from a Rasool or a Kosie over the counter in some dodgy bit of town…(no offence to any Rasool's or Kosie's reading this! Lekker boys!)

In today's economy, with everyone under financial pressure, it would do you well to do some research on your vehicle and shop around for reputable aftermarket spares. Places like Masterparts, Goldwagen, Autozone, and even Midas, are good places to pick up OEM equivalent spares. In many cases, you can end up saving hundreds, if not thousands of rands just by buying something that doesn't come from the dealer network with it's pretty boxes and badges and bells and whistles.

I drive a 2004 BMW 320i Individual. It's old, it's gold, and like any car of her age, she needs a lot of TLC sometimes (if you wonder why cars are 'a she' its because they cost us money - lots of money - but also provide so much joy). Replacing the lower control arms on the suspension means the entire control arm and ball joints need to be replaced. From the agents, that would easily be R2700 PER control arm. So, R6000 vat inclusive, and we haven't touched the bushes, shocks etc. Oh, and the Individual has sport suspension so, a wee bit different from standard

Cue a call to Masterparts (I did this exercise 18 months ago so prices may have changed), and I was able to buy the following:
a) Four shocks
b) Entire front suspension (lower control arms, bushes, strut mounts, drag links, etc.)
c) rear suspension

All for the princely sum of R7000 or thereabouts. Fitment took half a day at your local tyre store – Continental at N1 City has great coffee! – and about R1000 in labour. I did the brakes all round and similarly, got in at about R3000 or R4000 for discs all around, plus brake pads, plus sensors and labour.

Now, ok, I hear you say 'we don't all have BMWs'. Here's another example:

A family member calls me the other day and says she's being rushed almost R4500 for a clutch kit on a 2009 Hyundai Atos. WHAT! Fifteen minutes later, I have a quote from three suppliers, all OEM equivalent, all under R3000 – the cheapest being R1980, and the most pricey being R2551. So, by knowing where to go, and what to look for and what to ask (is this OEM accepted or equivalent?) I could save her R2000. It really is that simple.

Guys and girls, don't fall for the hype.

There are always quality parts available at the right price for the right vehicle via the right aftermarket parts dealers. Get to know your Masterparts, Goldwagens, Autozone's etc. The technical advice from a reputable dealer can be trusted. These guys know their stuff. Dealers aren't called stealers buy petrolheads for nothing. Again it comes back to what you want. If it's a mint M3 with collectable status and you can shelve the few thousand for authentically stamped BMW parts, by all means. But geez, that little Conquest from Noah's Ark will be perfectly fine with an aftermarket clutch kit or wheel bearing, or whatever you need. Or, the student with the old VW Polo that has a few dings don't fall for the marketing schpiel that says it MUST be fixed at Volksie.

Do your homework. Know your car. Know where to get decent spares. Have trusted mechanic. Save a shedload of money!

We live in a world where facts and fiction get blurred
In times of uncertainty you need journalism you can trust. For 14 free days, you can have access to a world of in-depth analyses, investigative journalism, top opinions and a range of features. Journalism strengthens democracy. Invest in the future today. Thereafter you will be billed R75 per month. You can cancel anytime and if you cancel within 14 days you won't be billed.
Subscribe to News24
Related Links
Is there a real difference between OEM and aftermarket car parts - expert explains
WATCH | This Limpopo pupil designed and built his dream car from scratch
Next on Life
Does cruise control help save fuel when driving? Here's what you should know