Gene Haas is rumoured to sell his F1 team, but could Dmitry Mazepin be a potential buyer? • The Haas F1 team saw its performance in the sport gone from bad to worse.

• Team owner, Gene Haas, could be looking to sell the team in future.

• Dmitry Mazepin is a likely candidate to purchase the team from Haas.

Rumours are swirling around the Formula 1 paddock that Gene Haas could be looking to sell his F1 team. If these are indeed true, it will come as little surprise given that the team has been on a downward spiral for the last six seasons. 2020 was their worst season in the sport to date, with this year looking even bleaker.

Team owner Haas might be evaluating his prospects in the sport and look at potentially removing himself from the equation. It'd be a smart move on the face of it, given that the team's ratio of income vs expense is not all that positive.

Suppose Haas does decide to sell his team. In that case, it's very likely that the chairman of the team's new sponsor, Uralkali, and father of current driver Nikita Mazepin, Dmitry Mazepin, could emerge as the potential candidate to purchase the team from him. And if the tweet by @OnlyFruits is to be believed, Mazepin could find a partner in William Storey - owner and CEO of Rich Energy, the energy drinks company that sponsored the Haas F1 team in 2019.

So, according to rumours, Gene Haas is pulling out of #F1 and sadly selling out to Dmitry Mazepin, and might include a sponsorship agreement, with a ?? we all know too well...?? pic.twitter.com/icJSyz7mIX

But would Gene Haas sell?

This, quite literally, is a million-dollar question, because there is quite a bit for Haas to consider before taking such a drastic step. When the team first joined the sport, they were relatively competitive in their debut season and made a strong impression on the midfield. But as the years went on, the Haas F1 team fell into the abyss and were left challenging the Williams team for the last place in 2020.

Gene Haas made no secret about the fact that he wants to be competitive and that he'll leave the sport if the team continues its dismal run. He came close to making good on that promise in 2020, but the proposed budget cap and several promises saw him sign the latest Concorde Agreement that'll see the Haas team in F1 until the end of the 2025 season.

However, Haas could still sell if the right offer or person(s) come(s) around. Enter Dmitry Mazepin - and Storey, if the rumours were to be true.

Mazepin was in the running to purchase Force India in 2018, but lost out to Lawrence Stroll, who renamed the team Racing Point (now Aston Martin). And while Mazepin has been pretty sour about losing out to Stroll, he has always been looking into the possibility of owning an F1 team - even if it's to secure a racing seat for his son, Nikita. Gene Haas knows this. And with him knowing that Dmitry wants to own an F1 team, the American team owner could pack his bags and call the sport farewell.

Perhaps Haas opts against selling his team and choose to wait it out for 2022 when the regulation overhaul comes into play. But even that won't guarantee the team any competitiveness, and Gene Haas might not want to stick around waiting for it to happen. 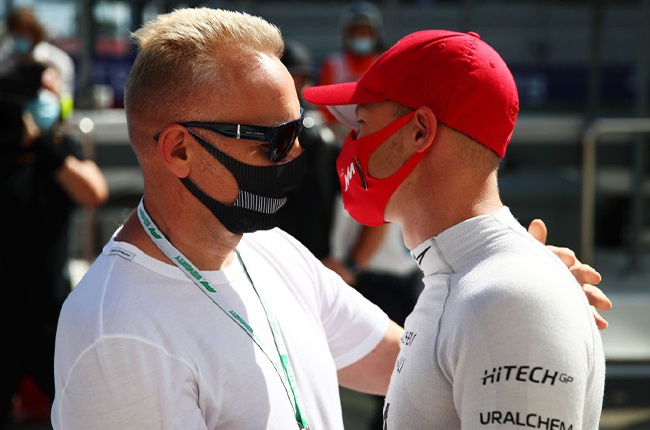 Nikita Mazepin (right) and his father, Dmitry
Getty Images Joe Portlock
We live in a world where facts and fiction get blurred
In times of uncertainty you need journalism you can trust. For 14 free days, you can have access to a world of in-depth analyses, investigative journalism, top opinions and a range of features. Journalism strengthens democracy. Invest in the future today. Thereafter you will be billed R75 per month. You can cancel anytime and if you cancel within 14 days you won't be billed.
Subscribe to News24
Next on Wheels24
First Leclerc's watch in Italy, now Vettel's bag stolen in Barcelona