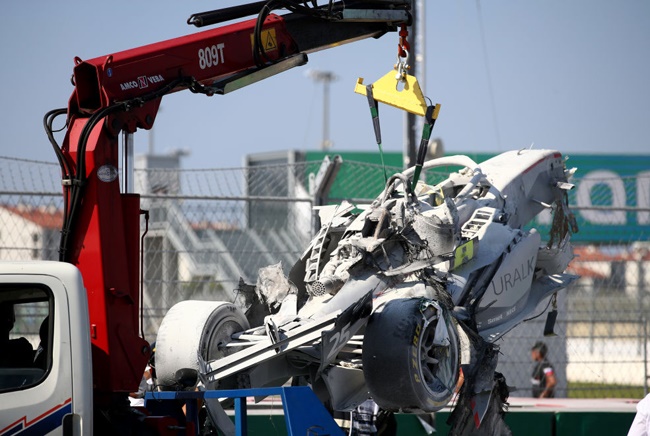 Track marshals clear the debris after a crash between Jack Aitken of Campos Racing (9) and Luca Ghiotto of Hitech Grand Prix (25) during the Formula 2 Championship Sprint Race at Sochi Autodrom on September 27, 2020 in Sochi, Russia. (Photo by Bryn Lennon/Getty Images)
Bryn Lennon

• The Formula 2 field is using 18-inch Pirelli tyres for the first time this year.

• Tyre safety to be investigated after the F2 crash at the Russian GP.

• A frightening fiery crash between Luca Ghiotto and Jack Aitken forced the abandonment of the Formula 2 race.

F1's governing body will look into whether there is a safety problem with the sort of 18-inch wheels that are set to be introduced in Formula 1 in 2022.

Although the corona crisis has put back the introduction into F1 until 2022, the Formula 2 field is using 18-inch Pirelli tyres for the first time this year.

On Sunday at Sochi, a frightening and ultimately fiery crash between Luca Ghiotto and Jack Aitken forced the abandonment of the Formula 2 race.

Afterwards, some observers wondered if the crash highlighted a problem with the 18-inch design that causes a sudden puncture with even light contact.

"I hadn't noticed that," Daniel Ricciardo said on Sunday when asked about the incident and the potential link with the 18-inch wheels.

"I'm just glad that the drivers are ok, but I am sure that all the parties involved will look into whether there are any problems with the way the new wheels work."

Thankfully both Jack Aitken and Luca Ghiotto walked away from the incident#RussianGP ???? #F2 pic.twitter.com/qPexWLQjaf

F1 race director Michael Masi was asked the same question, and he also admitted he has not thought about whether the 18-inch design is inherently problematic.

"To be honest, regarding this incident, I was primarily interested in the condition of the drivers and the restoration of the barrier," he said.

"But the FIA always pays attention to these things, so I'm sure that together with Pirelli we will investigate it after the weekend, as is the case with any other serious incident."

KEEP UPDATED on the latest Wheels news by subscribing to our FREE newsletter here.

We live in a world where facts and fiction get blurred
In times of uncertainty you need journalism you can trust. For 14 free days, you can have access to a world of in-depth analyses, investigative journalism, top opinions and a range of features. Journalism strengthens democracy. Invest in the future today. Thereafter you will be billed R75 per month. You can cancel anytime and if you cancel within 14 days you won't be billed.
Subscribe to News24
Related Links
New racing security measures to follow Hubert F2 death say FIA
F1 to improve its car strength after the death of F2 driver Anthoine Hubert
Next on Life
First Leclerc's watch in Italy, now Vettel's bag stolen in Barcelona