I keep thinking 'It can't get any worse' - Vettel 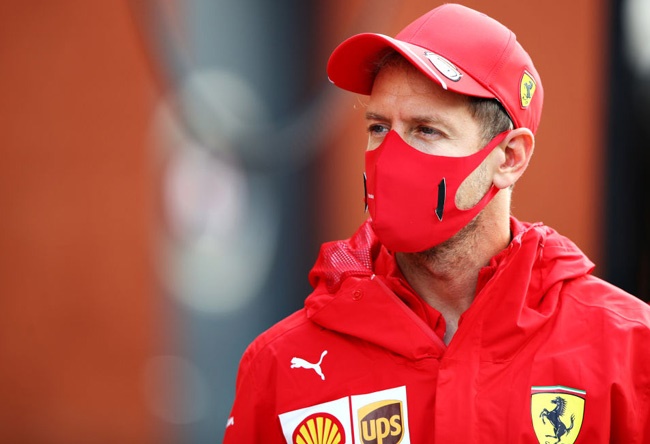 • Sebastian Vettel says he is trying to do his best but circumstances are difficult.

• The German had more car trouble in the Italian GP on Sunday and retired with brake failure.

• Despite the crisis, Vettel now seems more at peace with his ousting.

"I don't know what happens next," the quadruple world champion, who so far this year has grappled with a highly-uncompetitive car after being told he was not wanted for 2021, said at Monza.

On Sunday at the fabled Italian circuit, he retired with brake failure.

"I keep thinking 'It can't get any worse'. But apparently it does," said Vettel, whose next career step is currently unclear.

"The fun factor is definitely not at its peak right now. On Tuesday I will be in the simulator for the first time, at least that should hold up," the German smiled.

But while earlier visibly upset with the situation at Maranello, Vettel now seems more at peace with his ousting.

Sebastian Vettel when asked what he would tell to his 2008 self if he met him now: I think I wouldn't talk to him! I don't have any big regrets to tell him 'watch out in that year, that race'. I would choose not to say anything, because that's the beauty of life! pic.twitter.com/TfyyFHqp07

"Naturally I'm not quite as involved as I was before," the 33-year-old told ORF.

"I'm trying to do my job until the end of the year, which is of course not so easy when things are not going well.

"I wouldn't say it's frustrating, but it just sucks. I have no choice but to try to keep going somehow. This year will remain difficult and next year will no longer affect me.

"The team has chosen a different direction than me."

How do you think Ferrari could fix their situation? Please email us your thoughts here.

Some experts even believe it will take a full decade for Ferrari to get back to the front of the field.

"I wouldn't say that," former Ferrari driver Gerhard Berger told AvD Motorsport Magazin. "But I think Ferrari fell into the wishful thinking again of wanting to win the championship as Italians.

"But success would have gone Italy's way anyway, because Ferrari is so Italian. But for a team you have to get the best from all around the world.

"In my time we went through a lot of dry spells," said Berger, who had two separate stints in red in the '80s and again in the '90s.

"They were maybe not as extreme as now, but they were also difficult. But you can only move forward with hard work put in over the years.

"Ferrari did that, but now they have quite a crash. Combined with Vettel's exit, it's a difficult time. You can see that with Sebastian."

However, Berger disagrees that Ferrari's deep slump will last a decade.

"Maybe not ten years, but three for sure," said the Austrian.

We live in a world where facts and fiction get blurred
In times of uncertainty you need journalism you can trust. For only R75 per month, you have access to a world of in-depth analyses, investigative journalism, top opinions and a range of features. Journalism strengthens democracy. Invest in the future today.
Subscribe to News24
Related Links
Sebastian Vettel rumours 'suddenly quiet' - Ralf Schumacher
OPINION | Ferrari better be prepared for harsh criticism post-Italian GP
Next on Wheels24
OPINION | Lewis Hamilton needs to realise tantrums are for spoiled children

Get the newsletter
Lockdown For
DAYS
HRS
MINS
Brought to you by
Voting Booth
Which of these factors are prohibiting you from buying an electric vehicle as your next car?
Please select an option Oops! Something went wrong, please try again later.
Prices should be more affordable
16% - 242 votes
Our unreliable electricity source
9% - 138 votes
There's not enough charging infrastructure
10% - 158 votes
All of the above
64% - 969 votes
Previous Results
Car Doctor
Hold my ECU: Owners of tuned cars remove engine control units to prevent them...