Kimi Raikkonen to leave Ferrari at end of 2018 - official Former world champion Kimi Raikkonen will leave Ferrari at the end of 2018, the Italian Formula 1 team announced on Tuesday.

The team said in a statement: "Scuderia Ferrari announces that, at the end of the 2018 season, Kimi Raikkonen will step down from his current role.

READ: Charles Leclerc to replace Kimi Raikkonen at Ferrari in 2019

"During these years, Kimi's contribution to the team, both as a driver and on account of his human qualities, has been fundamental. He played a decisive role in the team's growth and was, at the same time, always a great team player."

Kimi Raikkonen will leave @ScuderiaFerrari at the end of the season, the team has confirmed:

"As a World Champion for Scuderia Ferrari, he will always be part of the Team’s history and family. We thank Kimi for all of this and wish him and his family a prosperous future." pic.twitter.com/EKVvyR5wPb

Sauber confirmed: "The Alfa Romeo Sauber F1 Team is delighted to announce that Kimi Raikkonen will join the team from 2019. The 2007 F1 World Champion has signed for the next two seasons."

Raikkonen left F1 two years after winning the world title with Ferrari and spent two years competing in the World Rally Championship, before returning to F1 with Lotus in 2012.

Raikkonen moved back to Ferrari in 2014.

"As a World Champion for Scuderia Ferrari, he will always be part of the team's history and family. We thank Kimi for all of this and wish him and his family a prosperous future," the team added.

At the same time, Charles Leclerc has announced that he will be Sebastian's Vettel's new team mate at Ferrari in 2019. 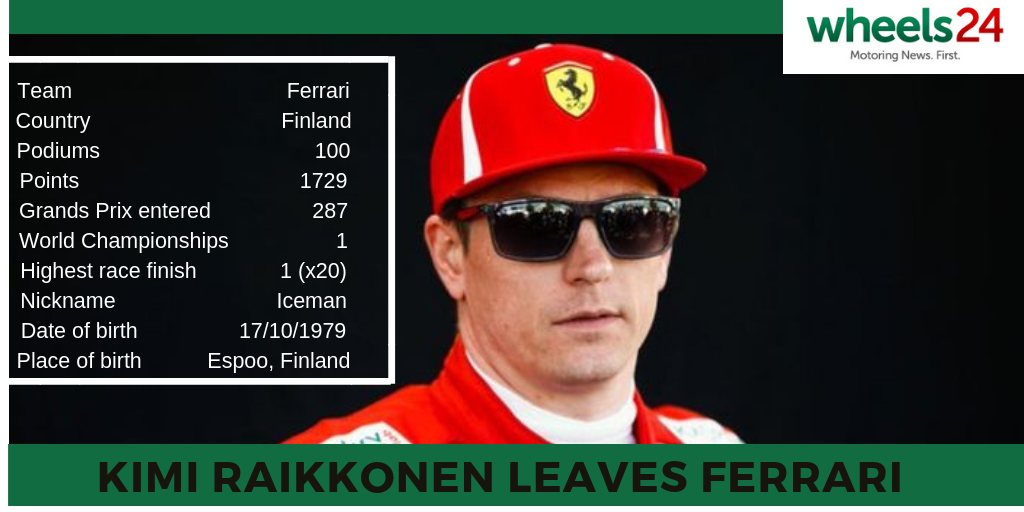 We live in a world where facts and fiction get blurred
In times of uncertainty you need journalism you can trust. For only R75 per month, you have access to a world of in-depth analyses, investigative journalism, top opinions and a range of features. Journalism strengthens democracy. Invest in the future today.
Subscribe to News24
Related Links
Horner: Third car is interesting but impractical
Grosjean has 'unfinished business' with Haas
Wolff defends Vettel over 'unfair' criticism
Next on Wheels24
Unhappy 10th birthday: Lamenting a decade of DRS displeasure in Formula 1