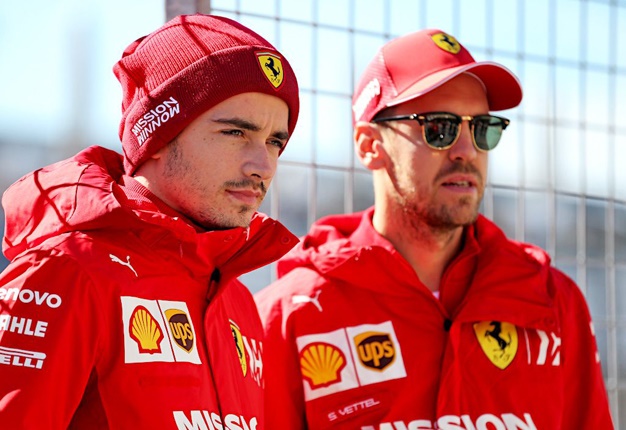 Despite the on-track tussles with team mate Sebastian Vettel and dethroning him as Ferrari's No.1 driver, Charles Leclerc claims Vettel is a "nice person" and he has learned a lot.

Leclerc took the fight to Vettel straight from the get-go during his first season with the Scuderia, resulting in Vettel losing his No.1 status and both drivers being treated on equal terms.

That led to a handful of on-track squabbles between the pair, culminating in a costly crash in Brazil which ended the race of both drivers.

Vettel’s future at Ferrari is in doubt as he enters the final year of his current contract, but Leclerc has revealed what Vettel’s experience has brought to the team and how he has been able to learn from it.

Should Ferrari give preferential status to Leclerc in 2020? Email us.

Leclerc said at the Autosport International show: I learned a lot, really a lot. I mean, he’s extremely professional, and he’s going a lot into the details. And Seb, he’s also a very nice person. “We were working well together. Obviously, we’ve had our moments on the track, in which we’ve learned together, and hopefully it won’t happen again things like in Brazil.

“But at the end, I think we are mature enough out of the car to work together and to try to develop the kind in the right way. But I think in the way he’s working with the team and the engineers, I’ve learned a lot and I’ve still got a lot to learn."

Leclerc adds: “He’s going a lot in the details, as I said, and things that I never thought will be helpful to the engineers he will say anything. Sometimes I’m just here listening for one hour what he has to say about the session. He’s just very, very interesting.”

Leclerc’s future with Ferrari is most definitely secure having signed a new long-term deal with the Scuderia that runs until the end of the 2024 season.

We live in a world where facts and fiction get blurred
In times of uncertainty you need journalism you can trust. For only R75 per month, you have access to a world of in-depth analyses, investigative journalism, top opinions and a range of features. Journalism strengthens democracy. Invest in the future today.
Subscribe to News24
Related Links
Martin Brundle surprised Charles Leclerc and Max Verstappen did not join Mercedes
Leclerc has the mindset of a champion - Alfa Romeo boss
Next on Wheels24
F1: Kyalami wants South African GP confirmed by early 2023