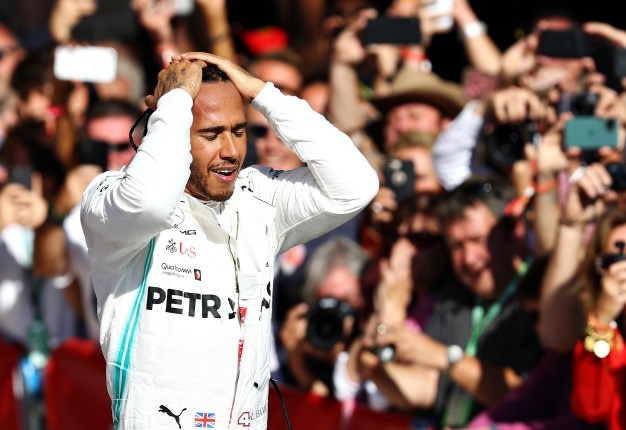 Lewis Hamilton cemented his position as one of Formula 1's true greats when he captured his sixth world title, a staggering achievement described as "not bad for a boy from a council house."

His second-place finish at the United States Grand Prix on Sunday took him past the five titles of Juan-Manuel Fangio -- who he describes as "The Godfather" -- and to within one of seven-time champion Michael Schumacher.

He had already won more than men like Australia's Jack Brabham, fellow-Briton Jackie Stewart, Austrian Niki Lauda and Brazilians Nelson Piquet and Ayrton Senna in a spectacular statement of achievement.

The son of a black father and a white mother, who survived a broken home in his youth, Hamilton, 34, grew up on a municipal housing estate where his father Anthony at one time held down three jobs to fund his son's embryonic racing career in karts.

His journey was unprivileged and without luxury, but it was clear from an early age that he had an outstanding gift for speed and all the gutsy natural instincts of a born racer.

HAMILTON: "My Dad told me when I was six or seven years old never to give up, it's the family motto. I don't know about championships, but as an athlete I feel fresh as can be right now. I'm ready for the next race, we'll keep pushing"#USGP ???? #F1 pic.twitter.com/FkhOq54cQr

On and off the track, he was fast, somewhat mercurial and occasionally tempestuous and this combination led to a fierce rivalry with team-mate and two-time champion Fernando Alonso, who left McLaren at the end of the year.

That was a signal of how tough it was to be for all his future team-mates as Hamilton, who narrowly missed out on the 2007 title, returned to triumph in 2008 with a dramatic last-gasp fifth-place finish in Brazil.

He also showed frustration as McLaren failed to deliver the speed to beat current rival and four-time champion Sebastian Vettel and Red Bull, who reeled off four straight title triumphs from 2010 to 2013, by when Hamilton had departed for Mercedes.

"Thank you so much, guys - we did an incredible job... I can't believe it"

An emotional @LewisHamilton - champion of the world for a sixth time #USGP ???? #F1 pic.twitter.com/PPb9L2oryL

Escaping the management regime of Dennis and his father, Hamilton found freedom at Mercedes alongside team-mate German Nico Rosberg, his teenage karting friend and rival.

Mercedes team chief Toto Wolff summed up: "He is never satisfied. He never settles. He is never happy with where he is as a racing driver and a human being. He wants to optimise, to develop and he is very much part of the leadership of the team."

Earlier this month, he posted his concerns for the environment and revealed a fleeting despair at the state of the world when he used Instagram to declare that the planet was "a messed-up place" and he felt he wanted "to give up".

That commentary, including revelations about his vegan lifestyle, led to him being accused of hypocrisy.

"I'm only human," he said. "Like everyone, we have up and down days. That's what I've been really trying to convey."

On Sunday, father Anthony summed up his son's achievement: "It's absolutely amazing and not bad for a boy from a Stevenage council house."

We live in a world where facts and fiction get blurred
In times of uncertainty you need journalism you can trust. For only R75 per month, you have access to a world of in-depth analyses, investigative journalism, top opinions and a range of features. Journalism strengthens democracy. Invest in the future today.
Subscribe to News24
Related Links
Hamilton wins sixth Formula 1 world title
WATCH | Trevor Noah pays a visit to the US Grand Prix
Next on Wheels24
Williams founder and former F1 team owner Sir Frank WIlliams dies, age 79