Lewis Hamilton in hot water for wearing a Breonna Taylor t-shirt at the Tuscan GP? 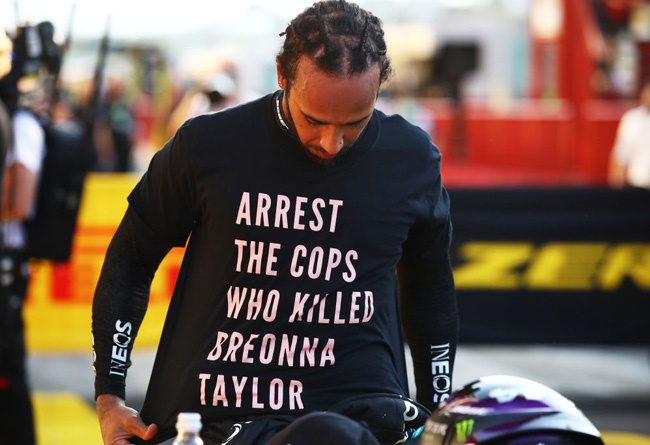 Lewis Hamilton wears a shirt in tribute to the late Breonna Taylor in parc ferme during the F1 Grand Prix of Tuscany at Mugello Circuit on September 13, 2020 in Scarperia, Italy. (Photo by Bryn Lennon/Getty Images)
Bryn Lennon

• The FIA is investigating Lewis Hamilton for wearing a Breonna Taylor t-shirt on Sunday.

• The FIA is investigating whether Hamilton broke one of the F1 statutes.

The FIA is investigating Mercedes driver Lewis Hamilton for wearing a Breonna Taylor t-shirt before the Tuscan Grand GP on Sunday (13 September), and on the podium after winning the race, according to the BBCto the BBC Sport.

Mercedes Lewis Hamilton has been a loud and leading voice in Formula One taking charge in support for the Black Lives Matter campaign.

The Briton has been wearing a Black Lives Matters t-shirt before every race since the 2020 season after the senseless killing of George Floyd. He was killed in Minneapolis, Minnesota, during an arrest for allegedly using a counterfeit bill.

F1 and the FIA have established an anti-racism and pro-diversity campaign which includes anti-racism demonstrations before every race. Several other F1 drivers have joined the movement by kneeling with Hamilton before every race while all drivers wear "End Racism" t-shirts.

The Mercedes driver, and his team mate Valtteri Bottas, now pilot black cars on race days instead of the notorious silver, which has unofficially been dubbed as the 'Black Arrows', they also wear black overalls, along with the rest of their F1 team.

On Sunday, though, Hamilton wore a new t-shirt bringing awareness to the six-month anniversary death of Breonna Taylor who was killed on 13 March earlier this year by US policeman.

What do you think of the FIA investigating Lewis Hamilton for wearing the Breonna Taylor t-shirt? Please email us your thoughts. The front of Hamilton's t-shirt read "Arrest the cops who killed Breonna Taylor" and at the back, "say her name" above a picture of her face.

The inaugural Tuscan Grand Prix in Mugello, Italy became a crash-marred spectacle on Sunday when the race was red-flagged twice and seeing only 12 cars cross the finish line by the end of it. The event also marked Scuderia Ferrari's 1000th grand prix and saw Mick Schumacher drive his father's winning F2004 car around the Mugello racetrack under perfect conditions.

Hamilton won the chaotic race and wore the same t-shirt after that, and during the podium ceremony. Now, the driver who has been using his platform to drive support for the Black Lives Matter campaign, is under investigation, according to the BBC Sport.

The FIA is investigating Lewis Hamilton for wearing the "political" t-shirt. According to the BBC, Formula 1 bosses are looking into whether the driver broke statutes at the Tuscan Grand Prix by wearing a t-shirt highlighting police brutality and that the case was "under active consideration".

However, the British news site reports that "the only reference to politics in the statutes is a requirement on the FIA to 'refrain from manifesting discrimination on account of race, skin colour, gender, sexual orientation, ethnic or social origin, language, religion, philosophical or political opinion, family situation or disability in the course of its activities".

"The sporting code forbids competitors from 'affixing to their automobiles advertising that is political or religious in nature or that is prejudicial to the interests of the FIA'."

We live in a world where facts and fiction get blurred
In times of uncertainty you need journalism you can trust. For 14 free days, you can have access to a world of in-depth analyses, investigative journalism, top opinions and a range of features. Journalism strengthens democracy. Invest in the future today. Thereafter you will be billed R75 per month. You can cancel anytime and if you cancel within 14 days you won't be billed.
Subscribe to News24
Related Links
F1 | Five top moments from the chaotic Tuscan Grand Prix
Lewis Hamilton wins chaotic, crash-marred Tuscan Grand Prix
Next on Wheels24
First Leclerc's watch in Italy, now Vettel's bag stolen in Barcelona