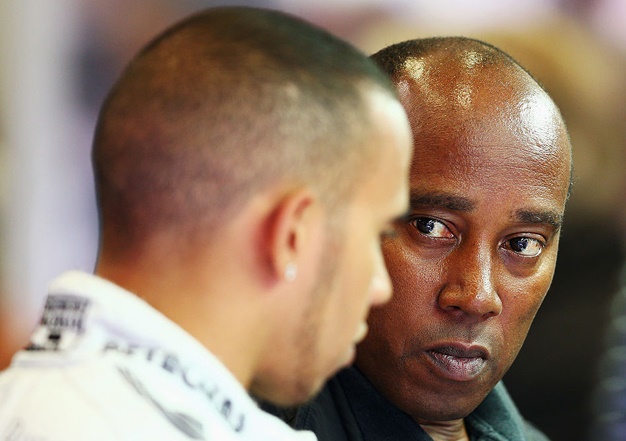 SPA, BELGIUM - AUGUST 24: Lewis Hamilton of Great Britain and Mercedes GP talks with his father Anthony Hamilton as he prepares to drive in the final practice session prior to qualifying for the Belgian Grand Prix at Circuit de Spa-Francorchamps on August 24, 2013 in Spa, Belgium. (Photo by Clive Mason/Getty Images)
Cliva Mason, Getty Images

Lewis Hamilton's father is arguing that Formula 1 should not get back to racing in July.

Six-time world champion Hamilton himself has been in the headlines this week after chastising the "white-dominated sport" for staying silent amid the George Floyd protests.

His boss, Toto Wolff, says he has learned about identity politics from the 35-year-old.

"He asked me once 'Have you ever had the active thought that you are white?' and I said 'No, actually I've never thought about it'.  He said 'Well I need to think about it every day'," Wolff told reporters on Wednesday.

Even former F1 supremo Bernie Ecclestone is a supporter, telling AFP news agency that Hamilton talking about politics "is a good thing".

Now, Hamilton's father and former manager Anthony has entered the fray, arguing that Formula 1 should not get back to racing while the coronavirus is still active.

"We should have the patience and respect to say let's wait till the number of new coronavirus cases is down to zero so the key workers can go home, relax and they too can enjoy watching sport," he told F1 business journalist Christian Sylt.

Hamilton senior also told ITV that he might not even watch his son race his Mercedes in July when the first 'ghost races' kick off in Austria.

"It would make me feel extremely disingenuous to celebrate watching Lewis racing or celebrating on the podium. I wouldn't particularly want to be watching the TV and cheering while thousands of people are dying from a virus," he said.

We live in a world where facts and fiction get blurred
In times of uncertainty you need journalism you can trust. For only R75 per month, you have access to a world of in-depth analyses, investigative journalism, top opinions and a range of features. Journalism strengthens democracy. Invest in the future today.
Subscribe to News24
Related Links
Mercedes to wait on new Lewis Hamilton deal - Wolff
Mercedes: We 'stand with' Lewis and 'condemn every form of discrimination'
Next on Wheels24
F1 LIVE | 2021 United States Grand Prix - 3rd Practice