Social distancing and team bubbles: How F1 differs in 2020 from all previous years • Post-race celebrations look markedly different than in other years.

What an opening race weekend we've had in Austria on Sunday (5 July).

This first race of the 2020 Formula 1 season began under 'new normal' conditions with Valtteri Bottas (Mercedes-AMG) taking the win on Sunday.

But the build-up to the race, and post-race celebrations were very different to what we're used to. It's something everyone must adapt to, and it will be the new reality for the foreseeable future.

Here are three aspects of the race weekend that will change from here on out.

What did you find strange or interesting watching the first race of the 2020 season? Please Email us.

No fans and social distancing

F1 is known for its crowds and fan parks, but this year things have taken a drastic turn. Considering Covid-19, the sport adopted social distancing measures. These include personnel at the track maintaining a two-metre distance between them (exceptions are made), as well as the absence of fans.

These measures, especially the latter, are put in place to curb the spread of the virus, and for F1, these practices will probably stick around for at least the 2021 season.

This is a significant contradiction to previous years where fans adorned the stadiums and flooded the track for post-race celebrations. 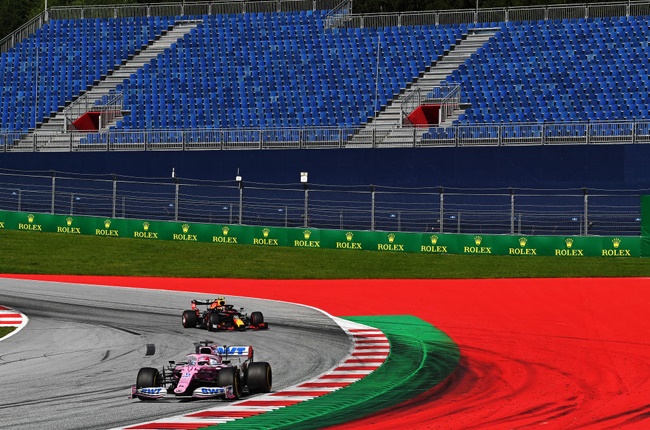 What was particularly strange on Sunday after the race were the celebrations. As Bottas, Charles Leclerc (Ferrari), and Lando Norris (McLaren) readied for the podium celebrations, three small steps were placed on the track. The top three finishers of the race, and for every race of 2020, will walk over to a mic and answer the questions posed by the interviewer individually.

The spraying of champagne will also be different.

In previous years, drivers would stand on the podium and have massive celebrations. It'll be a while before we see close-contact celebrations in F1. A further attempt at minimizing the spread of the virus, F1 adopted the 'bubble' concept. Each team, already running with limited staff, will have to operate within their garage. No staff member can visit another garage, or else fines will be enforced.

Teams like Ferrari implemented further bubbles, with its drivers having their own teams.

F1 in 2020 is entirely different from what we've come to expect over the years, but one can only hope that this 'new normal' will not last forever.

Wheels24's Janine Van der Post says: "Despite all these new regulations, some things were a little more difficult to restrain, as Charlen mentions above.

"McLaren for one, could not contain their excitement and any rules about physical distancing were thrown out the window when their young driver, Lando Norris was bumped up to third place after Hamilton received a five-second penalty.

"The Woking-based team went crazy as the team in the garage were overwhelmed by excitement with a stunning result for the first race of the season.

"And, the rule about champagne might be on paper, but even Mercedes' race winner Valtteri Bottas sprayed his fellow team member, and let's not even talk about McLaren. It's a new normal for sure, but everyone will have to get used to it in the meantime, and pretty fast too." 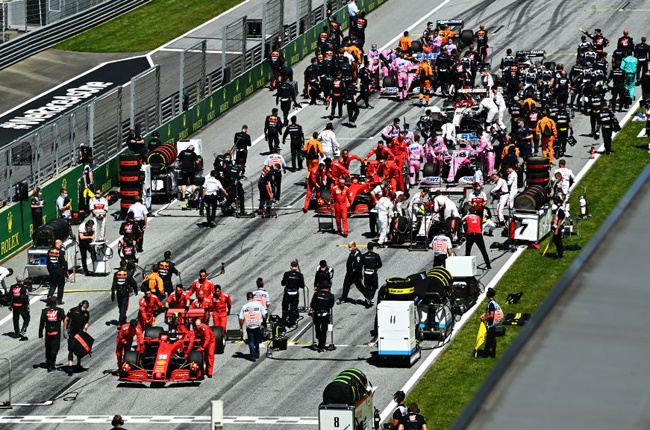 Formula 1 grid before the start of 2020 Austrian GP (Clive Mason / Getty Images)
We live in a world where facts and fiction get blurred
In times of uncertainty you need journalism you can trust. For only R75 per month, you have access to a world of in-depth analyses, investigative journalism, top opinions and a range of features. Journalism strengthens democracy. Invest in the future today.
Subscribe to News24
Related Links
'Careful what I say': Albon in new Hamilton clash and misses Austria podium
F1: Mercedes' Bottas wins season-opening GP in Austria
Next on Wheels24
Williams founder and former F1 team owner Sir Frank WIlliams dies, age 79